The Thompson is inescapably associated with gangsters during America's prohibition era as "the gun that made the twenties roar," though this is largely a media myth: the gun was far too expensive for an average thug (costing $200 with a single 20-round magazine, equivalent to about $2,800 in modern money) as well as heavy and hard to conceal, and the most common weapons for such criminals were revolvers or sawed-off shotguns. The Thompson's infamy instead stems from a few high-profile users such as John Dillinger, George "Machine Gun" Kelly and especially Al Capone. Ironically, it was originally only intended for military and police use only and was marketed as "The gun that safeguards the innocent!", and providing a level of firepower that would send cowardly criminals running for cover. Considering that a fully automatic weapon with a good amount of recoil isn't exactly the safest way to ensure no innocent bystanders are hurt, it didn't take off in this role and eventually hit the civilian market. 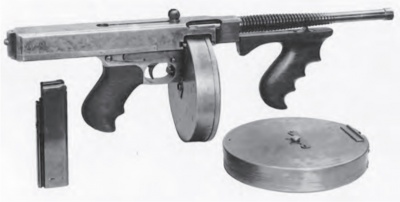 The Thompson Light Rifle and variants can be seen in the following films, television series, video games, and anime used by the following actors:

In 1925 Auto-Ordnance Company signed a license agreement with British gun manufacturer Birmingham Small Arms (BSA). BSA Model 1926 was chambered in 9x19mm and used the standard Thompson mechanism including the Blish lock combined with a traditional rifle stock. The tests of the submachine gun were not successful, so some changes were made, resulting in the Model 1929. This version has ribbed barrel and was fitted with Cutts compensator and Lyman rear sight. Model 1929 was made in 9x23mm Bergmann, 9x19mm Parabellum, .45 ACP, and 7.63x25mm Mauser. As with Model 1926, Model 1929 also did not arouse interest among potential users. It is estimated that only 10-15 BSA Thompsons were made in total.

The BSA Thompson and variants can be seen in the following films, television series, video games, and anime used by the following actors: