Outside the Law is a 2010 French-Algerian film and the follow-up to Days of Glory, set between 1945 and 1962. Three Algerian brothers are separated after their father is killed in the 1945 Sétif massacre (the film's depiction of it caused some controversy). Abdelkadar is jailed in France for participating in demonstrations, Messaoud enlists in the French Army as a paratrooper and is sent to Indochina, and Saïd moves with his elderly mother to Paris, where he makes his fortune in the shady underground of Pigalle. Eventually the three brothers are reunited, where they get involved in the struggle for Algerian independence.

It should be noted that, despite sharing the same character names and actors as Days of Glory, the movie should be considered a standalone, rather then direct, sequel.

The following weapons appear in the film Outside the Law:

A Gendarmerie fires his Hi-Power at the FLN in a shootout.

Faivre loads a new magazine into his sidearm.

A Gendarmerie fires his Hi-Power.

Messaoud fires his .45 at the Gendarmerie.

Messaoud's sidearm is illuminated by the burning car. Note that slide has drawn back, meaning the magazine has expended. 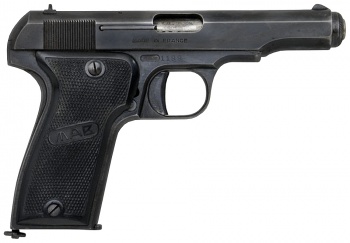 The French police inspector that Abdelkadar assassinates is armed with an three inch barrel Smith & Wesson Model 10 in a shoulder holster. After he is killed, Messaoud (Roschdy Zem) takes it and uses it during the escape. 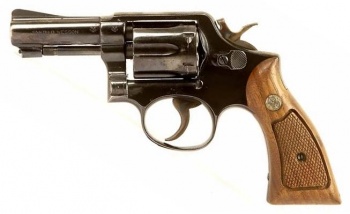 The Smith & Wesson Model 10 can be seen in a shoulder holster.

Saïd (Jamel Debbouze) carries a Walther P38. This might be a nod to his role in Days of Glory, where his character also carried a P38.

Saïd (Jamel Debbouze) fires a Walther P38 at the Gendarmerie. 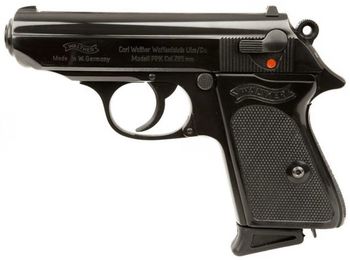 Abdelkadar (Sami Bouajila) with the PPK.

FLN guerrillas use the M1A1 Thompson.

The FLN guerrilla on the left fires an M1A1 Thompson.

An FLN guerrilla with a Thompson.

French Gendarmerie and FLN guerrillas use the MAT-49. 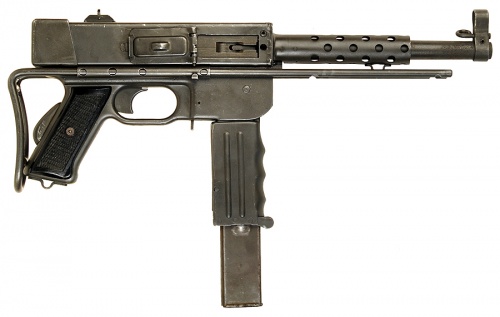 A French policeman covers Abdelkadar with the MAT-49.

An FLN guerrilla fires a MAT-49 at a convoy of Harki's.

A Gendarmerie fires a MAT-49 at the FLN.

FLN guerrillas, including Messaoud (Roschdy Zem) use the MP40 during a firefight with the Gendarmerie.

Ali (Assaad Bouab) shoots up the police station with an MP40.

Messaoud (Roschdy Zem) pulls the charging handle of an MP40...

An FLN guerrilla on watch with the MP40.

An FLN guerrilla fires an MP40 at the Gendarmerie.

Messaoud (Roschdy Zem) uses the PPS-43 when the FLN ambush a convoy of Harki's.

Messaoud (Roschdy Zem) fires a PPS-43 at the Harki convoy.

Messaoud tells the guerrillas to cease firing. He has the expended magazine in his hand.

A Sten gun can be see amongst the pile of arms.

French shopkeepers in Algeria shoot at protesters with the 12 Gauge Double Barreled Shotgun.

A French shopkeeper and his son fire 12 Gauge Doubled Barreled Shotguns at Algerian demonstrators in Sétif. Note that the father is starting to reload.

A French shopkeeper fires his 12 Gauge.

One of the protestors turns a shotgun against it's user.

A shopkeeper fires his shotgun.

A French shopkeeper shoots at demonstrators with a Fusil Modèle 1916 Carabine. French riot police carry them at the end of the movie.

The shopkeeper aims his rifle.

A French riot policeman with a Fusil Carabine.

A riot policeman fires his Berthier.

French Army troops and Algerian Gendarmerie are armed with the MAS-36 rifle.

A Gendarmerie runs into position with his MAS-36.

The Gendarmerie open up on demonstrators with the MAS-36.

A firing squad in action as French soldiers run by with MAS-36 rifles.

A French soldier prepares to search an Algerian house.

French soldiers round up civilians.

Vietminh troops are armed with the Norinco Type 56. This is an error, as the Type 56 wasn't developed until after the battle of Dien Bien Phu, and because there is no evidence that the Vietminh used any AK pattern rifles during the Indochina wars.

A Vietminh guard escorting French prisoners is armed with a Norinco Type 56.

A Vietminh guard with a Type 56.

French soldiers use a jeep-mounted Browning M1919A4 during the Sétif massacre.

A French soldier mans a Browning M1919A4 on a jeep mount.