From Internet Movie Firearms Database - Guns in Movies, TV and Video Games
(Redirected from The Jaguar (Yaguar))
Jump to navigation Jump to search

The Jaguar (Yaguar) is a 1987 (filmed 1986) Soviet drama film directed by Sebastián Alarcón and based on the novel The Time of the Hero (La ciudad y los perros) by Mario Vargas Llosa. The plot shows the life of a cadet of Chilean military school, nicknamed Jaguar (Sergey Veksler), and how are his views changing from a defender of the Pinochet regime to its determined opponent.

The following weapons were used in the film The Jaguar (Yaguar):

A cadet in center carries a Thompson on sling.

Cadets with visually modified StG 44s and a Thompson submachine gun (at the left).

Another view of the Thompson at the left.

Many cadets in formation hold Thompsons. They are seen blurry due to the fast motion of the movie camera on a car.

A guerilla fighter holds a Thompson in the final scene.

A cadet at the far left holds an Enfield rifle.

An Enfield rifle is seen in center in the same scene. It is blurry due to fast movement but still identifiable.

The cadets, sent to assist the police to disperce the rioters, get from the lorries. A man in center holds an Enfield rifle.

A number of the cadets in formation hold Enfield rifles.

Sturmgewehr 44 assault rifles, visually modified to resemble AR-10 or early versions of AR-15, are widely used by the cadets, notably Jaguar (Sergey Veksler), Fernandes (Artyom Kaminsky) and Arana (Adel Al-Khadad). Totally about ten such guns can be seen simultaneously, probably all the Mosfilm armory. There are two slightly different versions, with the dark furniture and with more bright wooden furniture. The real weapon of the Chilean military at that time was a SIG SG 510-4.

Night break dance with a gun in the barracks.

A visually modified StG 44 at the left lacks the platings on the pistol grip.

The cadets, sent to assist the police to disperce the rioters, get from the lorries. Two men in center hold visually modified StG 44s, one with the black furniture and another one with the brown furniture.

A close-up of the receiver of Jaguar's rifle.

A close-up of the barrel of the rifle on sling.

Cadets, including Jaguar (in center, with the rifle on sling) and Fernandes (at the right, aiming), with the visually modified StG 44s. Fernandes' rifle has brown furniture.

A single ArmaLite-like Sturmgewehr 44 is fitted with a large tube worn around the barrel. Seen in hands of a police officer, it represents a tear gas grenade launcher.

The crudely made "barrel" of the fake launcher.

The gun in hands of a police officer at the left.

Lt. Gamboa (Sergey Gazarov), Sgt. Pessoa (Islam Kaziyev) and other officers and NCOs carry revolver holsters that are definitly empty (in some cases, they are even bended).

When resting, one of the Jaguar's fellow cadets shoots a toy pistol with suction cups.

A cadet shoots a toy pistol in the washroom.

Another view of the toy pistol.

A number of military training posters is seen in the classes. These are Soviet posters, depicting both Soviet and NATO military equipment.

The poster in center shows several tanks and other armored vehicles, an anti-tank gun and an AK assault rifle (at the top right corner). The poster at the right shows various naval weapons: a submarine-launched ballistic missile, a surface-to-air missile, a battleship or cruiser main gun turret, a small caliber twin AA mounting, a torpedo and a torpedo launcher, and a anti-submarine multiply barrel rocket launcher. 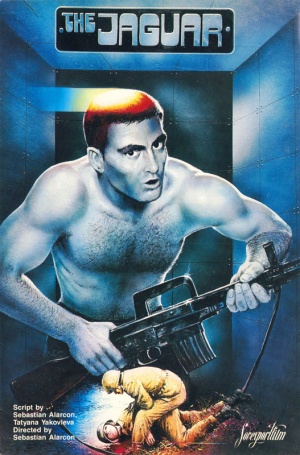