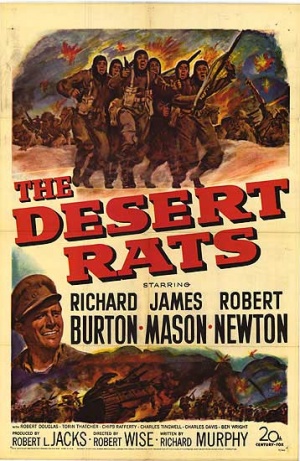 The Desert Rats is a 1953 war movie about the dramatic events that took place in 1941 in the North African theatre. After initial victories against the Italians who had colonized the area, the Allied troops were now being chased eastwards by the Germans under the command of General Rommel (James Mason), later in WWII to be promoted to Field Marshal.

The Australian 9th Division (whose nickname is in fact "The Rats of Tobruk", and not as the movie title incorrectly suggests "The Desert Rats") pulls back to the coastal town of Tobruk. They seek to avoid encirclement and become trapped with Rommel’s troops seeking to take the town as it is a thorn in their side on their way to the Suez Canal. The movie deals with the hardships endured during the siege by the unit of Capt. 'Tammy' MacRoberts (Richard Burton), who is from Scotland and thus has understandable challenges exercising his command upon an Australian army unit. The highlight of the movie is a commando raid led by Capt. 'Tammy' MacRoberts on an underground German ammunition dump.

The movie does not seem to have had an expert armorer since there’s an extraordinary number of errors in the use of military hardware. Only in a few scenes do the Germans actually use a German gun (the Mauser Gewehr 1898 rifle), for the rest they are using Allied weapons such as the Thompson submachine gun and the Vickers/Browning 1917 machine guns. In one memorable scene, a German truck convoy is attacked by a plane that’s first a Spitfire with D-Day stripes (not to appear until June 1944) and a second later it’s an American Grumman Avenger (not to appear until 1942)…

The following guns were used in the film The Desert Rats:

A Colt Official Police is carried by Capt. 'Tammy' MacRoberts (Richard Burton) on most occasions. It was not surprising for an English officer at the time to carry an American revolver since the British military actually purchased several thousand Colt Official Police revolvers directly from Colt in 1940-41 chambered in 38/200. 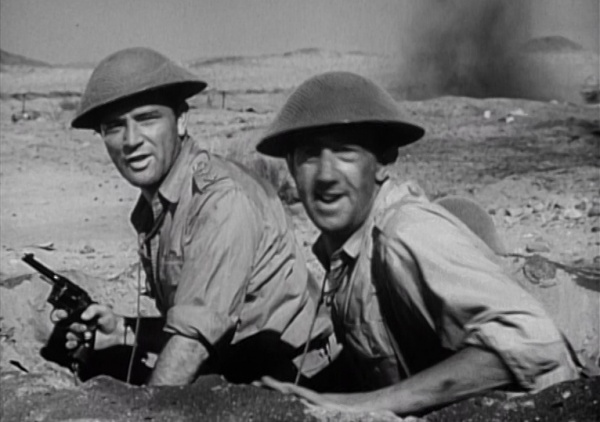 'Tammy' manages a smile when finally relief is being send to his part of the frontline. Note the inconveniently long and thick lanyards that keep the revolvers on their person. 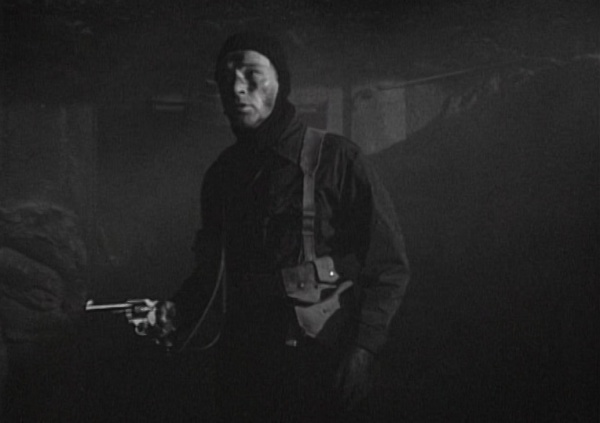 During the commando raid on the German ammunition dump ‘Tammy’ is securing the entry to the ammunition storage area with his Colt Official Police.

A small number of Enfield No.2’s are seen carried by Allied officers on several occasions, most notably by Lt. Harry Carstairs (Charles Tingwell). Even though they are not shown clearly, they can be identified by the typical ‘hooked’ front sight and the design of the area between the trigger guard and the barrel. 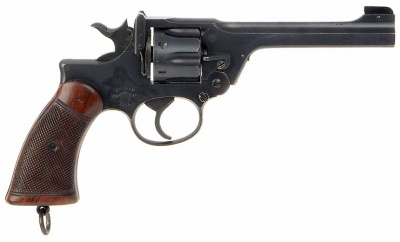 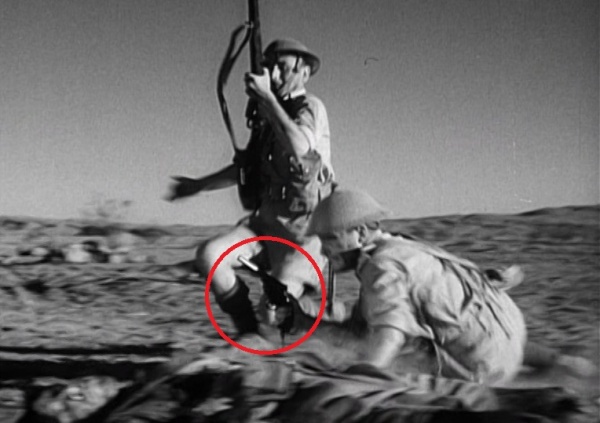 Lt. Harry Carstairs taking cover during his unauthorized but daring rescue attempt to save one of his men from no-man’s land. 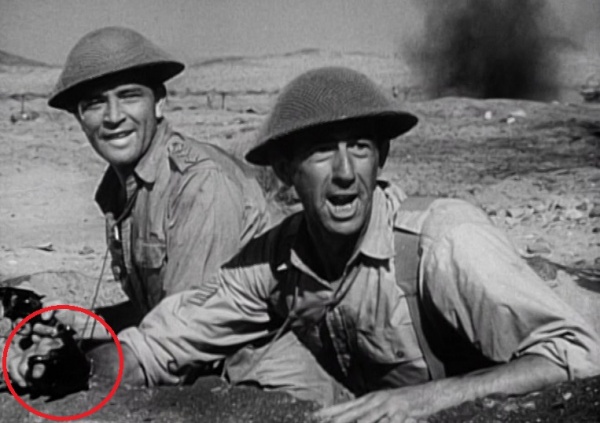 The typical front ‘hooked’ front sight of the Enfield No.2 can be clearly seen in this shot.

The M1928A1 Thompson submachine gun, with smooth barrel, is seen in the hands of the Allied commandos under Capt. 'Tammy' MacRoberts (Richard Burton) when they blow up an underground German ammunition dump. Surprisingly, some Germans can also be seen using it instead of the MP40. Although this is understandable as German troops sometimes used captured weapons. 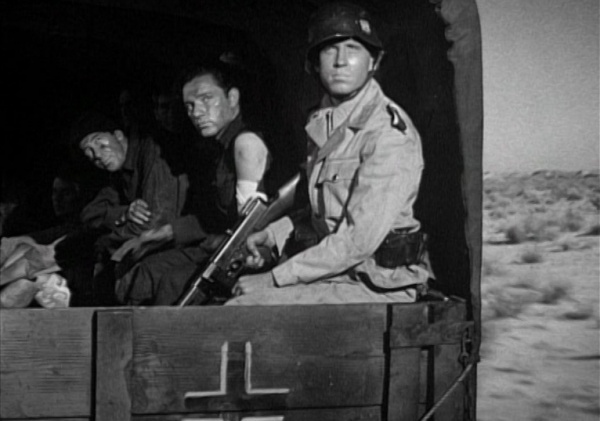 A German soldier carries a M1928A1 Thompson submachine gun when escorting Allied commandos after their raid. It may be possible that he took the gun as a trophy off the commandos. 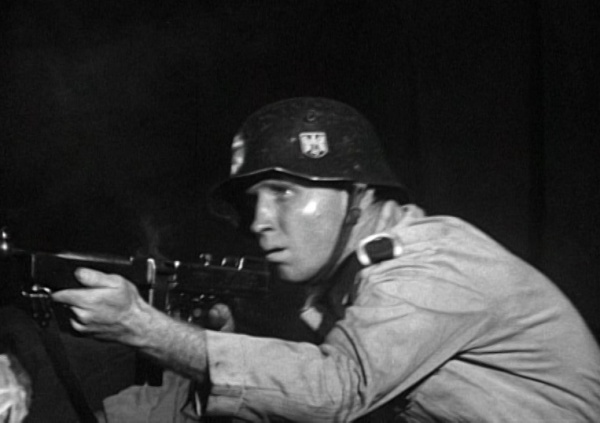 Nice shot of the M1928A1 Thompson submachine gun, clearly identified by the bolt actuator on top of the receiver (moved to right side on later versions) and the square-shaped Lyman Model 55B adjustable rear sights. 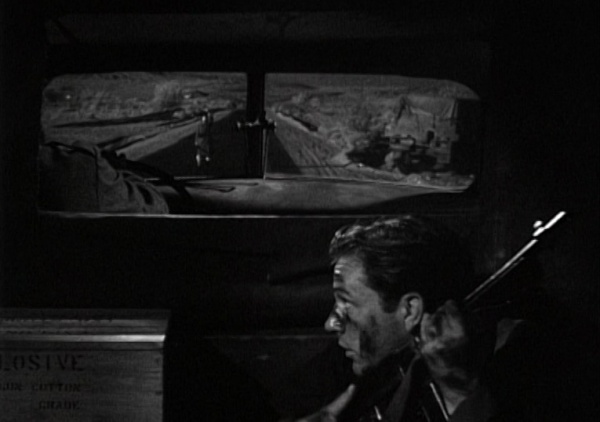 The Lee-Enfield No. 1 Mk III rifle is the most prominent gun in this movie, seen in the hands of almost all Allied troops. On a number of occasions bayonets are seen mounted and surprisingly, it is also seen in the hands of German soldiers during one of the attacks on Tobruk. 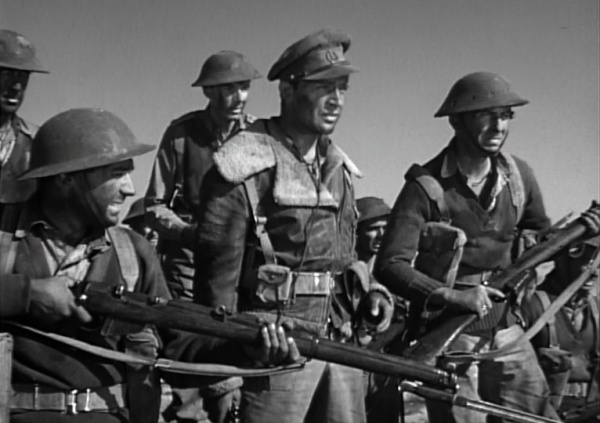 Dramatic shot of several Lee-Enfield No. 1 Mk III rifles during the final battle as relief troops are awaited to lift the siege of Tobruk. 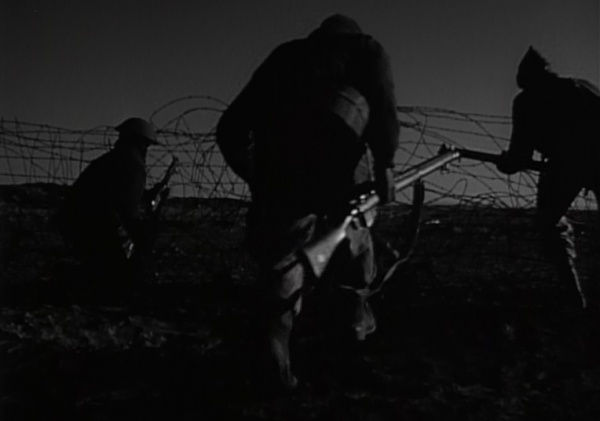 Several ‘Desert Rats’ are taking off on a night raid with their Lee-Enfield No. 1 Mk III rifles to harass the Germans that have them trapped in Tobruk. 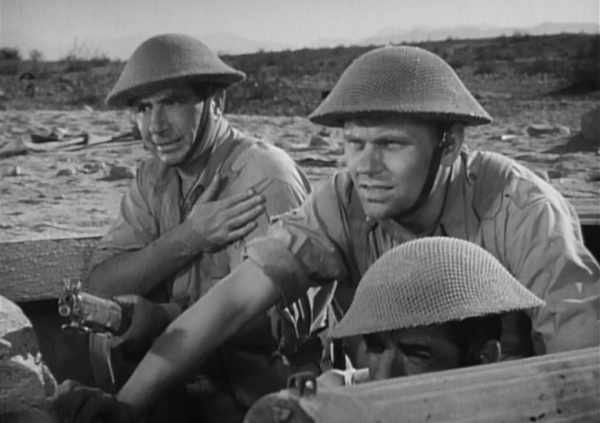 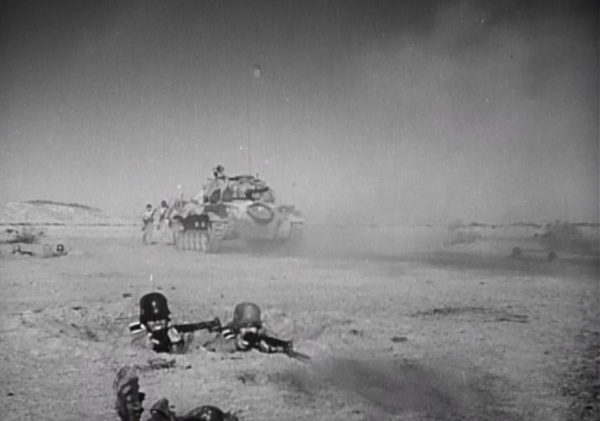 These German soldiers clearly don’t know whose side they’re on as they have opted to use their enemy’s Lee-Enfield No. 1 Mk III, clearly recognizable by the typical stubby front.

The only (…) German gun that the Germans actually use is the Mauser Gewehr 1898 rifle. Even though a successor model for this rifle had been introduced in the 1930’s, the Karabiner 98k carbine, this rifle still saw use in several theatres. 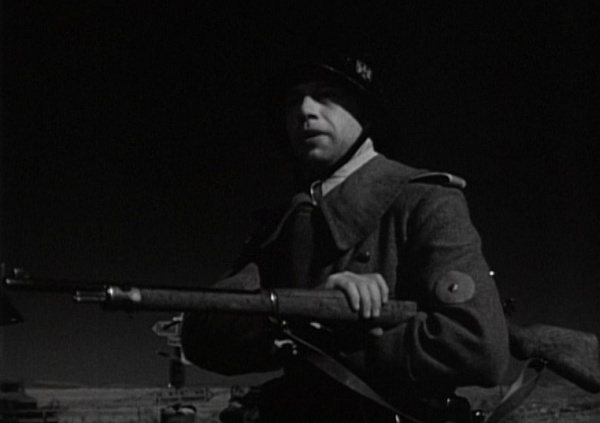 This shot clearly identifies the gun as a Mauser Gewehr 1898 and not its successor the Karabiner 98k carbine due to the longer barrel. 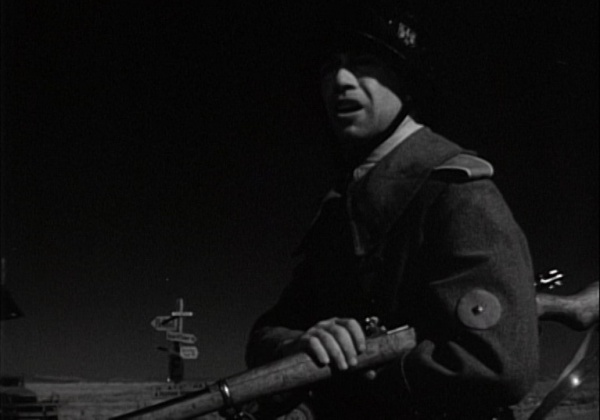 Probably not a good idea to keep the bolt pulled back in desert conditions…. 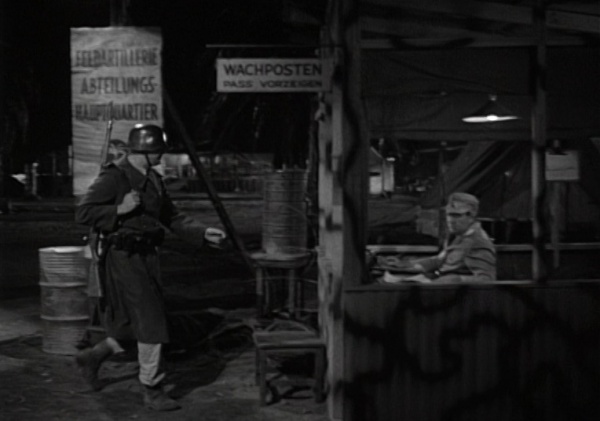 A German soldier with a Mauser Gewehr 1898 slung on his back as he guards the entrance to the desert ammunition dump.

The Vickers MK1 machine gun has a strong presence in the movie, most notably in fixed positions in trenches across the Australian defences of Tobruk. 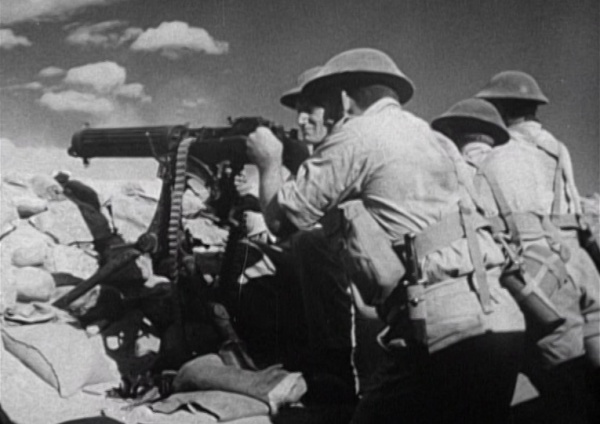 Typical shot of the Vickers MK1 machine gun in the trenches around Tobruk. Note that the condenser tube does not seem to be attached to the barrel jacket. 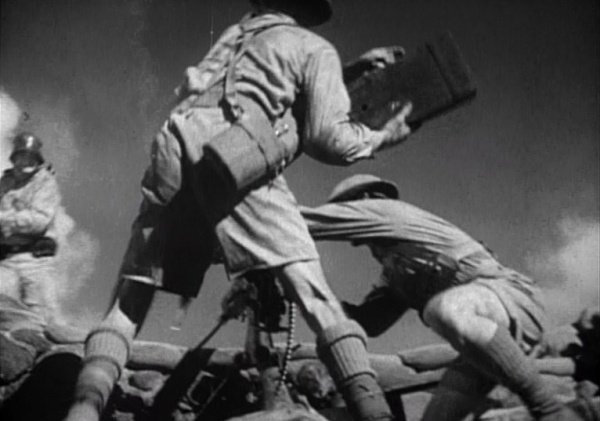 An Australian machinegunner shows that he’s not to be messed with; after the ammunition box for his Vickers MK1 machine gun runs dry, he uses it to hit approaching Germans with! 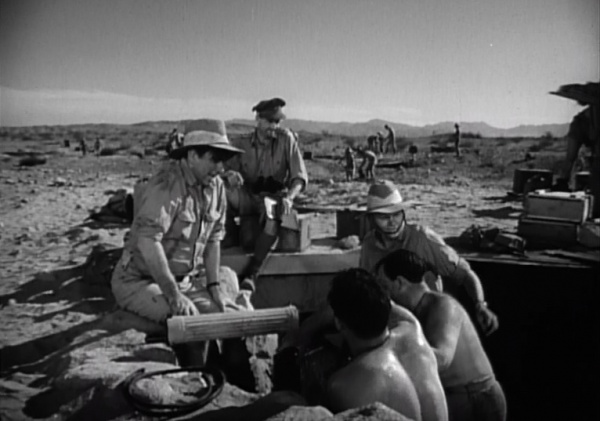 A Vickers MK1 machine gun position being set up at the Tobruk perimeter. Note that the condenser tube has not been attached yet and that the barrel jacket has been given desert-style camouflage. 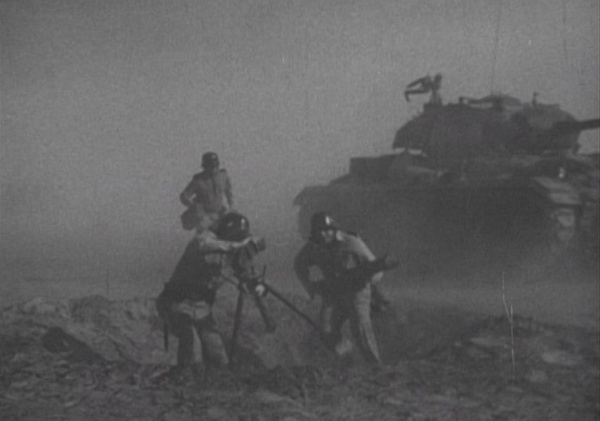 A nomination for the most unlikely use ever of a gun in a movie: advancing German soldiers move across the battlefield with the rather heavy Vickers MK1 machine gun; probably the MG34 was hard to get by for this movie.

A Bren Mk2 is used as one of the supporting weapons for the raid on the ammunition dump. It can also be seen in earlier scenes when Australian troops harass Germans with lethal night-time raids. 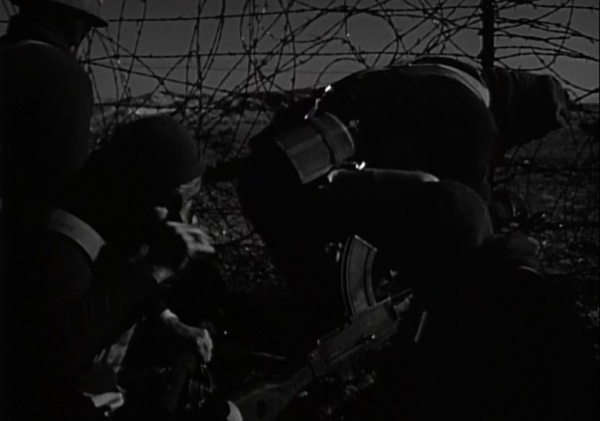 Australian commandos making the last preparations before yet another night-time raid on the German lines. 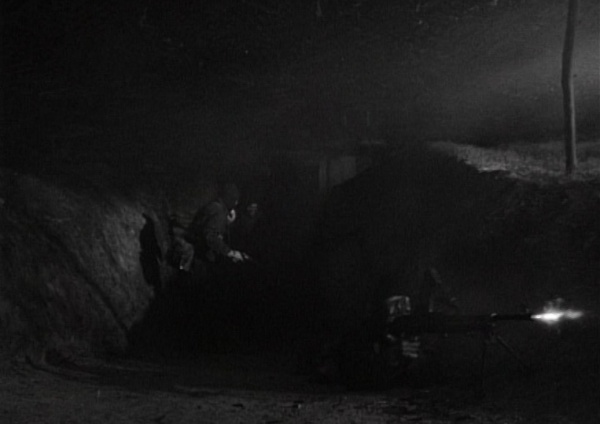 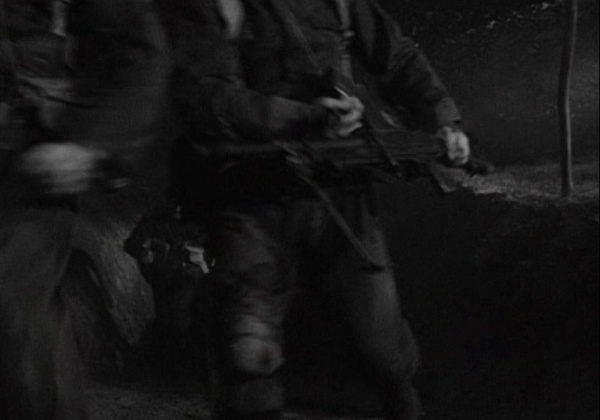 The same characters as in above image leaving the ammunition dump asap before the place blows up.

A Lewis Gun is seen being loaded into a truck during the preparations for the raid on the ammunition dump but not seen afterwards. 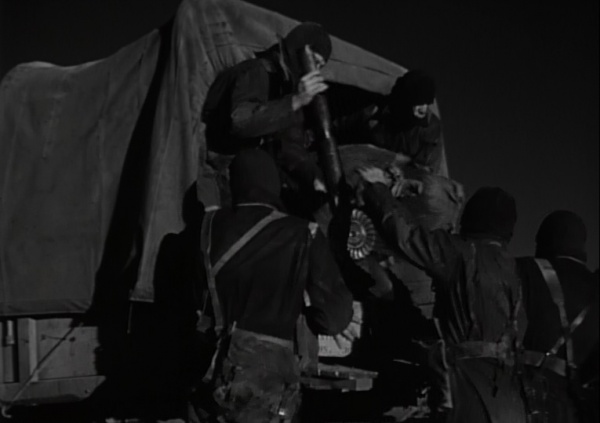 The Lewis Gun is easily identified by the typical big barrel jacket and the top-mounted drum magazine.

This hurts! In all static defence positions, the German troops are using the American Browning M1917. Again, the MG34 would be a much more likely candidate. 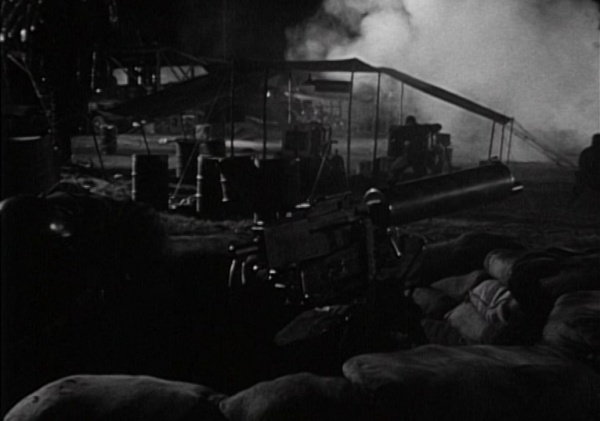 German soldiers moving to man their machine gun, clearly identifiable as a Browning M1917 because of the pistol grip, as Australian commandos run across the base. 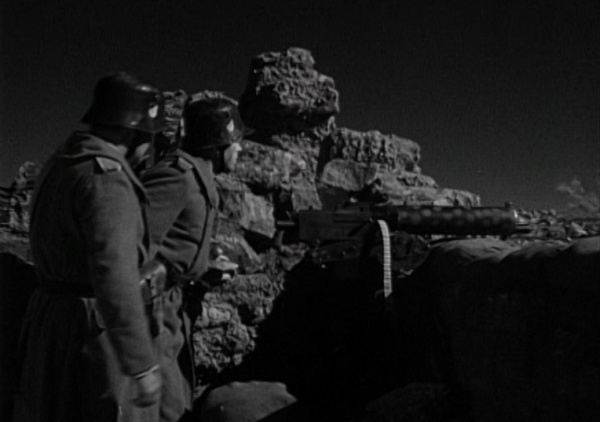 A rather clumsy attempt to camouflage a Browning M1917 with snowflake-like camo design in the desert…
Retrieved from "https://www.imfdb.org/index.php?title=Desert_Rats,_The&oldid=1316396"
Categories: