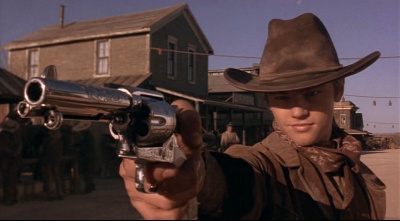 Leonardo DiCaprio as Fee "The Kid" Herod with his Cimmaron Single Action Army revolver in The Quick and the Dead (1995).

Leonardo DiCaprio as Billy Costigan pulls a Walther PPK/S in The Departed (2006).

Leonardo DiCaprio is an American film actor/producer who began his acting career at an early age, working regularly on television, until his breakthrough role appearing as Luke Brower in the series Growing Pains. He would then gain worldwide fame for his role as Jack Dawson in the 1997 blockbuster Titanic. Continuing his acting career through the ensuing decades, DiCaprio would star in such notable films as Gangs of New York, Catch Me If You Can, The Departed, Inception, J. Edgar, and Django Unchained. He has been nominated for six Academy Awards, for The Wolf of Wall Street, Blood Diamond, The Aviator, What's Eating Gilbert Grape, Once Upon A Time In Hollywood and The Revenant, the latter role of which he received in 2016 the Academy Award for Best Actor.