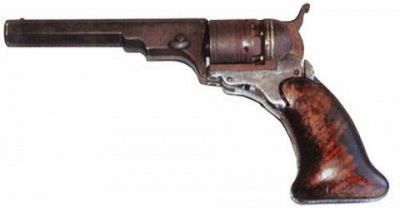 The Colt Paterson 1836 was the first handgun to incorporate Samuel Colt's patented revolver mechanism, and thus the first weapon that could be called a "revolver" in the modern sense. While hand-advanced flintlock revolvers date back hundreds of years earlier and Colt is believed to have been inspired by the flintlock revolver designs of Elisha Collier, Colt's was the first to connect the actions of advancing and locking the cylinder to cocking the hammer, and also incorporated percussion cap ignition, the most advanced method of the day.

It was far better than the cheap revolver "Pepperbox" derringers of the time, which Mark Twain famously remarked were safer to stand in front of than anywhere else. The gun's full potential was realized when Texas Rangers on horseback used them to effectively dispatch renegade Indians with them and soon the pistol was a hit, leading to the production of the Colt Walker. Further improvements and vastly higher production numbers would lead to better Colt designs such as the Colt Dragoon series.

In his book American Gun: A History of the U.S. in Ten Firearms, Chris Kyle describes the Paterson as the "grandfather" of Colt's Single Action Army revolver.

The Colt Paterson 1836 has been used in the following films: