The Vengeance of the Winged Serpent (La vengeance du serpent à plumes) is a 1984 French/Mexican adventure comedy directed by Gérard Oury and starring Coluche as Loulou Dupin, a middle-aged loser. He falls in love to a girl who appears to be a member of a leftist terrorist organisation, and this turnes Loulou's life upside down.

The following weapons were used in the film The Vengeance of the Winged Serpent (La vengeance du serpent à plumes):

A guard fires at guerrillas who attack the prison car.

One of the guerrillas fires at guards.

Another guard with revolver.

A driver of the car is shot.

Note the shape of the front sight.

A Mexican police comissioneer runs with a revolver in hand in the final scene.

A guerrillas with an SAA in holster.

Laura (Maruschka Detmers) is armed with a revolver in the scene in Chichen Itza. Later her revolver is hold by Pako (Rodolfo De Souza) and then by Alvaro (Luis Rego). The revolver appears to be Smith & Wesson Military & Police.

Laura aims her revolver at Loulou.

A side view of the revolver.

Alvaro holds the revolver in the final scene.

A revolver is seen in a holster of a policeman.

Valerie (Dominique Frot) is armed with a stainless steel revolver during the exchange of the kidnapped Alix Lefebure for Pako.

In the scene in Mexican church Loulou finds a revolver.

Ratoff (Philippe Khorsand) (at the left) and Mustapha (Farid Chopel) carry revolvers tucked at their belts.

French police comissioneer Goretto (François Dunoyer) (at the right) fires his revolver in the final scene.

A Mexican police detective fires his revolver in the final scene.

While in Paris, Mustapha (Farid Chopel) carries a Walther PPK.

Mustapha takes his pistol from a drawer.

M1911A1-style pistols are seen in hands of Mexican Military police personnel in the final scene.

An MP fires his pistol (at the right).

MAT-49 SMGs are seen in hands of French police. Several MAT-49s are among the firearms hidden in Loulou's apartments.

A Japanese member of the terrorist group (Takashi Kawahara) carries a MAT-49 with folded magazine on sling.

Several M3 "Grease Gun" are seen among the weapons hidden in Loulou's apartments. In the final scene a Mexican soldier fires an M3, fitted with perforated barrel shroud. It's hard to say if it's a pure movie prop (and what's the reason of such decoration) or if it's some Mexican-used version of M3.

A Mexican soldier with an M3 with perforated barrel shroud.

An MP40 is seen among the weapons hidden in Loulou's apartments.

A M1921A Thompson is used by one of the Mexican prison guards. In the final scene at least one Mexican soldier holds a Thompson.

A Thompson is seen in hands of a guard.

A barrel of Tommy Gun is seen at the left.

In the scene in Chichen Itza Pako (Rodolfo De Souza) is armed with a Madsen M50. Later it is used by Loulou Dupin (Coluche).

A close view of the Madsen.

A folding stock is seen.

In the scene of exchange the kidnapped Alix Lefebure (Ged Marlon) for Pako Laura (Maruschka Detmers) is armed with an Uzi.

In the abovementioned scene Ratoff (Philippe Khorsand) is armed with a Sa. Vz.61 Skorpion. 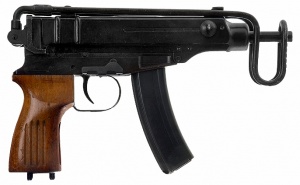 A Sawn-off Double Barreled Shotgun is seen among the weapons hidden in Loulou's apartments.

A shotgun is seen next to M3 SMG.

During the arrest of Pako, the leader of the terrorists, in Orly Airport several French policemen carry Ruger AC556 rifles.

AC556 is seen at the left. Note the distinctive barrel.

A Ruger AC556K is used by Norbert (uncredited), one of the terrorists, in the scene of exchange the kidnapped Alix Lefebure for Pako.

Most guerrillas are armed with lever action rifles, among which many Winchester Model 1873 rifles can be seen.

Uberti replica of a Winchester 1873 carbine

The guerrilla leader (Jorge Luke) strikes the door of the prison car with the buttstock of his rifle.

Guerrillas after the shootout.

At least one of the Mexican soldiers is armed with a FN 1924 Mexican Mauser Carbine in the final scene.

Mexican soldiers fire bolt action rifles in the final scene. An FN 1924 Mexican Mauser Carbine is seen in center. Note the short barrel, the shape of the top barrel band, the turned down bolt handle and the sling swivel below the handguard.

A Mexican soldier fires a rifle (seen at the background next to muzzle of the revolver). The rifle seems to be a bolt-action due to the position of the soldier's hand.

Two Heckler & Koch G3s are seen among the weapons hidden in Loulou's apartments.

Two G3s are seen next to Mustapha (Farid Chopel).

An Armalite AR-10 is seen among the weapons hidden in Loulou's apartments.

An AR-10 is seen among other firearms.

An F1 hand grenade is used by Laura (Maruschka Detmers) to destroy a lorry with newspapers. Some more F1s are seen among the weapons hidden in Loulou's apartments.

A grenade is thrown in the lorry.

Several grenades are seen among various explosives while Norbert makes a bomb.

In one scene a rifle, fitted with a rifle grenade launcher, is seen in hands of a policeman. It is probably Tromblon VB.