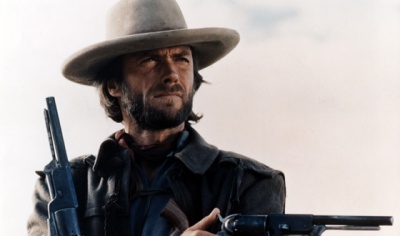 Clint Eastwood with a pair of Colt Walker 1847s as Josey Wales in The Outlaw Josey Wales (1976). 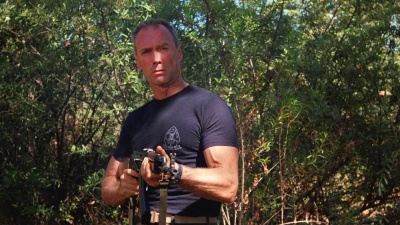 Clint Eastwood wields a Smith & Wesson 4506 as Detective Nick Pulovski in The Rookie (1990).

Clint Eastwood as William Munny takes aim with a Spencer 1860 Carbine in Unforgiven (1992).

Clint Eastwood is the American actor/director known for his numerous roles in such Western films as Pale Rider, High Plains Drifter, and Joe Kidd in addition to starring as The Man with No Name in a trilogy of films directed by Sergio Leone. He would later star as SFPD Inspector Dirty Harry Callahan in five feature films from 1971 until 1988. Eastwood would go on to become a prolific feature film director as well, helming such films as Unforgiven, Heartbreak Ridge, The Rookie (1990) as well as the 2014 war drama American Sniper. Eastwood has received four Academy Awards, both for Best Director and Best Picture, for the 1992 film Unforgiven and 2004's Million Dollar Baby. He also has featured several of his children in his films, including daughters Alison Eastwood and Francesca Eastwood, and sons Kyle Eastwood and Scott Eastwood.

Please visit here for the films in the IMFDB directed by or starring Clint Eastwood.