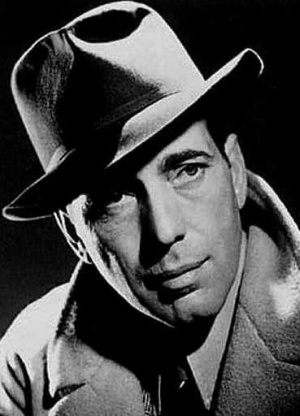 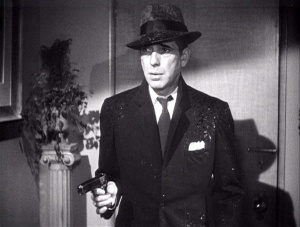 Humphrey Bogart (1899-1957) was born in New York City on Christmas Day to a well-to-do family. His father, Belmont, was a surgeon, and his mother, Maud, was a well known illustrator. Bogart had a strict upbringing and had frequent troubles at school. In 1918 he was expelled from the Phillips Academy, and so he joined the Navy and served during World War One. He started acting on Broadway in the 1920s, and made his first movie in 1930. For a long time he played supporting roles, but he gained the attention of the critics with his performance as the gangster Duke Mantee in the play "The Petrified Forest". When Warner Brothers adapted the play to the screen in 1936, Lesley Howard, that star of the movie, insisted on the casting of Bogart. After the success of The Petrified Forest, Bogart entered a contract with Warner Bros. However Bogart was typecast at playing gangsters and other heavies in movies throughout most of the late 1930s. In 1941, The Maltese Falcon finally brought success to Bogart as a leading man, and he became one of the top stars of Warner Bros. overnight. Bogart married four times, the longest of which was his last one, with actress Lauren Bacall, whom he met on the shooting of To Have and Have Not. In the late 1940s, Bogart ended his contract with Warner Bros. and founded his own production company, Santana. He was nominated for a Best Actor Oscar three times, and won in 1951 for The African Queen. Bogart was a firearms collector in real life. He owned a small but impressive collection of antique and modern pistols and rifles. Humphrey Bogart died on January 14 1957 from esophageal cancer.