The following weapons were used in the film Choice of Arms:

A Smith & Wesson Model 27 with 4" barrel is used by Sylvain Constantini (uncredited) during the ambush at Serge Olivier (Pierre Forget) and Mickey (Gérard Depardieu). Mickey takes Sylvain's revolver and uses it throughout the film. 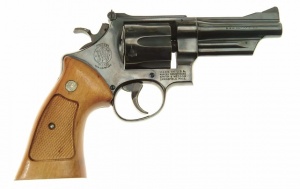 Mickey holds the revolver after the shootout.

In one scene Jean (Christian Marquand) gives a Smith & Wesson Model 29 with 6" barrel to Noel Durieux (Yves Montand) who carries it until the final. 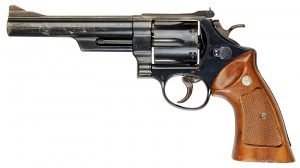 Smith & Wesson Model 29 is seen in the top row.

A Colt Python with 4" barrel is used by inspector Sarlat (Gérard Lanvin) after he looses his Browning Hi-Power. Python is also seen in hands of Andre (Jean-Claude Bouillaud) and in Jean's (Christian Marquand) armoury. Though according to the story these are different revolvers, all three seem to be the same movie prop.

Andre stops a gang of hoodlums.

Sarlat draws his revolver in the night scene.

A Colt Python is seen in the second row at the right.

Three snub nose revolvers are seen in Jean's armoury. They seem to be Smith & Wesson Model 36s. Two of them have square butts and lack logo on the grip so they can be not genuine Model 36s but some clone of European origin.

Two snub nose revolvers are seen in the top row and one more in the bottom row.

In the final scene one of police inspectors is armed with a snub nose revolver that also can be a Smith & Wesson Model 36.

The man in the middle (in green jacket) holds a snub nose revolver.

A Walther PPK is used by Mickey (Gérard Depardieu) during the prison break. A PPK is also seen in Jean's armoury.

Mickey holds his pistol while his car is under fire.

He fires from the car window.

A PPK is seen in the middle row.

Roland Davout holds his pistol while trying to start his car. Note a good trigger discipline.

Noel Durieux's pistol, loaded magazine and a box of cartridges. While the magazine is loaded with .45s, the box contains .38 Sp cartridges.

The pistol in Noel's car.

A close view of the pistol. The inscription "Combat Commander" is seen on the slide.

A Colt is seen among other firearms in Jean's armoury.

A Browning Hi-Power "Type 73" is carried by inspector Sarlat (Gérard Lanvin) until Mickey (Gérard Depardieu) disarms him. Mickey then uses Hi-Power during the bank robbery.

Sarlat aims his pistol at Mickey.

Some pistol is seen in Jean's armoury.

A pistol in holster is seen among the ammo boxes.

A pump action shotgun is seen among other firearms in Jean's armoury.

A security guard with shotgun is seen at the left.

A high-capacity magazine tube can be seen.

A double barreled shotgun is seen in Jean's armoury.

A double barreled shotgun is seen among other firearms in Jean's armoury.

A "Tommy Gun" is seen at the left.

In the final scene two police detectives are armed with bolt action sniper rifles. A rifle with sniper scope is also seen in Jean's armoury.

A man at the right holds a sniper rifle. Next to him is commissair Bonnardot (Michel Galabru).

The same sniper aims his rifle.

Two men on both sides of a tree hold sniper rifles.

A rifle with scope is partially seen on the bottom.

An M1 Carbine is seen in Jean's armoury.

An M1 Carbine is seen at the left.

An M16A1 is seen between double barreled shotgun and pump action shotgun.

A close view of the front sight.

A Model 24 Stielhandgranate is seen in Jean's armoury.

A grenade is seen in the bottom. 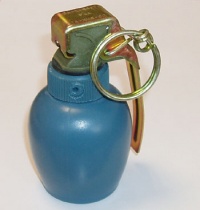 A blue colored hand grenade is seen in the bottom.

In one scene Commissaire Bonnardot watches news on TV that shows unrest in some foreign country.

M2HB heavy machine gun is mounted on the turret of the armoured car. A coaxial machine gun also can be seen.

A closer view of the M2HB.

One of the men behind the armoured car holds a gun that resembles Sten SMG.
Retrieved from "https://www.imfdb.org/index.php?title=Choice_of_Arms&oldid=1377462"
Categories: