Far from Men is a French 2014 movie directed by David Oelhoffen. 1954: A rebellion is simmering in Algeria that will lead to war between the Algerian independence movement and the military of the French colonial power. Daru, who formerly served in the French army, is now a French teacher in a remote village in the Atlas Mountains. A soldier asks him to take the farmer Mohamed to the nearest police station; the man is accused of being a rebel and murderer, facing execution. Together, Daru and Mohamed make their way through the mountains, in the middle of the icy winter, while horsemen and villagers pursue them, blood vengeance in mind. Slowly, the fleeing men begin to develop an understanding of each other.

The following weapons were used in the film Far from Men:

René (Yann Goven) owns an Mle 1892 Revolver which he gives Daru (Viggo Mortensen) to defend himself.

The grip of the revolver is seen in René's pocket on the left.

Daru took the revolver to his bed, knowing full well that his uninvited guest was trying something stupid.

One moment later, he looks out the window to see what Mohamed is doing outside.

After a brief gunfight, he checks the situation outside with the revolver in his right hand. 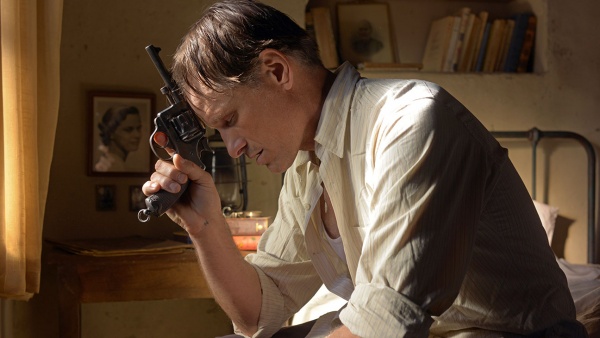 A promotional picture of the revolver and Daru.

The two leaders of the Algerian rebel group have MAC Mle 1950 pistols.

The main leader aims the MAC pistol telling the French soldiers that he has a hostage.

As Daru is on his way to the cave's entrance, he keeps aiming at him.

Slimane (Djemel Barek) watches the leader with his MAC pistol in hand.

The best view of the pistol while still aiming at Daru.

Slimane is pinned down by the French soldiers.

A 12 Gauge Double Barreled Shotgun is the primary weapon of Daru. Many other characters are also seen with double-barreled shotguns.

Daru fires his shotgun at a flying bird.

The shotgun slung over his back.

He wields it during the shootout at his school.

Repelling an ambush offers a close-up of the rear part.

A front view of the muzzle.

While hiding from an Algerian, he readies his gun.

Daru's shotgun in the hands of the rebel leader, who also has a 12 Gauge in his hand.

Daru and Mohamed taking a rest.

A French soldier (Antoine Laurent) is seen with an MAT-49.

The French soldier encounters Daru and Mohamed with his MAT-49.

A closer view of the SMG as he gave the order to hold fire.

Another distance view of the MAT 49 lowered by him.

At least, two other French soldiers can be seen with M1A1 Thompsons.

The soldier between Daru and Mohamed aims the Thompson.

A very close view of the buttstock and rear sight.

After their job is done, the soldier to the right and his comrades leave the skirmish place.

A German MP40 is wielded by one French soldier.

The soldier to the far left approaches Daru with his MP at the ready.

An Algerian horseman carries a Berthier Mle 1892 Artillery Carbine which is taken by Mohamed (Reda Kateb) after an encounter.

The Berthier carbine over the Algerian's shoulder while riding.

Surprised by Daru, he immediately targets both of them.

Mohamed offers the Berthier to Daru, who refuse this gift.

The Algerian rebel to the far right holds the Berthier which has just been taken away from Mohamed.

The same rebel fires the carbine at French soldiers.

Some Algerian rebels are armed with MAS-36 rifles.

A MAS-36 slung by a horseman heading to the two suspicious persons.

A close-up of the striking muzzle in front of Slimane.

Another rifle, which is also often carried by several rebels is the Karabiner 98k.

The rebel in the center carries a Kar98k over his back while searching Daru.

Side view of the scene, as he puts Daru's MAS revolver in his belt.

Another view of the carried Karabiner of the same rebel.

Two rebels defend themselves from the French ambush.

The long Lebel rifle is seen on the rebel's shoulder on the right.

The same rebel from a distant view.

A slightly better view of the rifle during the march.

Some of the Algerian rebels appear to be armed with Moroccan Mauser Mle 1950 rifles manufactured by FN Herstal and ordered for police forces in the 1950s.

A rebel holds his Mauser in his hand as he prepares to leave.

Another rebel walks by the talking leaders.

A Charleville Musket is carried by one rebel, that is never seen fired.

The Algerian behind Mohamed carries the Charleville.

M1917 Enfields are also used by Algerian rebels and, at least, one French soldier.

To the right, the barrel, and the typical front sight are visible.

The striking rear sight ears are seen on the far right.

The French soldier in the background, next to Daru, has an Enfield rifle over his back.

A Lee-Enfield Mk. I* rifle is very briefly seen slung by a rebel.

The Lee-Enfield over the rebel's shoulder. The rifle to the left is the Berthier Mle. 1892.

The box magazine is seen as he gets shot down.

Some M1 Garands are also used by two rebels.

One of the rebels aims his Garand at the cave's entrance.

A distant view of the same rebel on the right covering his leader.

Another rebel fighter holds his Garand while pinned down.

The two rebels realized that they could not continue their fight and raised their rifles as a sign of surrender.

A French soldier has an M1A1 Carbine that is seen very briefly visible in some scenes.

The grim-looking soldier starring at Mohamed carries an M1A1 over his back.

A view of the carbine's top side held by the soldier on the left.

A few moments later, the soldier shows Dua's weapons to the Lieutenant. The stock is now folded.

A few unknown rifles are seen in the hands of Algerian rebels.

The slung rifle on the right. This rifle appears to be a type of a Mosin Nagant Rifle.

A different rifle with a golden-plated muzzle and side-mounted sling swivels that looks like a Berthier or Lebel carbine.