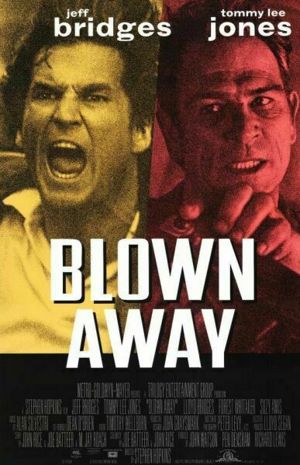 Blown Away is a 1994 action film directed by Stephen Hopkins and starring Jeff Bridges as Jimmy Dove, a Boston PD bomb tech whose life is threatened when an IRA bomber (Tommy Lee Jones) escapes prison and comes to the city to expose Dove's past. The film's cast includes Lloyd Bridges and Forest Whitaker.

The following weapons were used in the film Blown Away:

A Colt MK IV Series 70 is used by an M.I.T. student who commits suicide, leaving his ex-girlfriend trapped with a bomb in the computer lab. 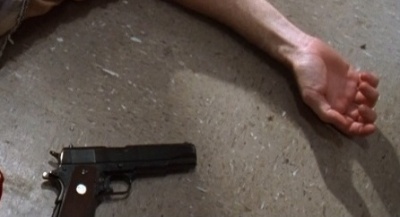 The dead M.I.T. student with the MK IV Series 70 he used to kill himself lying nearby

A Generation 2 Glock 17 is the sidearm of Jimmy Dove (Jeff Bridges) throughout the movie. Glock 17's are also carried by all of the other Boston P.D. officers, including Franklin (Forest Whitaker).

Gaerity smiles as the Glock is put to his head.

Dove holding his Glock on Gaerity.

A Mossberg 590 Mariner shotgun is used by Blanket (Ruben Santiago-Hudson) to detonate the bomb that kills him.

During Jimmy Dove's flashbacks to his days as an IRA member in Belfast, the British Army soldiers that he sees are armed with L1A1 SLR rifles, the British version of the FN FAL.

In Jimmy Dove's flashback, one of the IRA members killed accidentally by Ryan Gaerity's (Tommy Lee Jones') bomb is armed with an M1928A1 Thompson Submachine gun.

IRA members being killed by Gaerity's bomb; the one on the right in the air has an M1928A1 Thompson

Another of the slain IRA members killed by the bomb in Dove's flashback is armed with a sawed-off Mossberg 500 shotgun.

An IRA member lies dead with his sawed-off Mossberg 500 shotgun nearby
Retrieved from "https://www.imfdb.org/index.php?title=Blown_Away&oldid=1115684"
Categories: