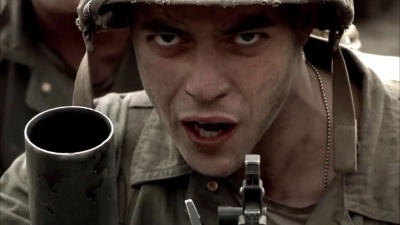 Rami Malek as Merriell 'Snafu' Shelton sights the M2 Mortar in The Pacific.

Rami Malek is an American actor whose television roles including appearances in such series as The Pacific, 24, and Over There and such films as The Little Things and No Time to Die in addition to his starring role in the USA Network series Mr. Robot. In 2019, he received the Academy Award for Best Actor for his role as Freddie Mercury in the 2018 film Bohemian Rhapsody.