Emperor is a 2013 American-Japanese drama film directed by Peter Webber (Hannibal Rising). On the orders of General Douglas MacArthur, Japan expert General Bonner Fellers is sent to the devastated Tokyo of the immediate post-war period. There, he is to search for Japan's main war criminals and investigate the situation of the Emperor of Japan. Although Emperor Hirohito is highly valued by his people, he is accused of serious war crimes. Fellers should help make a decision of special magnitude: Should the Emperor be brought to justice and sentenced to death?

The following weapons were used in the film Emperor:

The Colt M1911A1 is used by U.S. Army soldiers, including General Fellers (Matthew Fox), who keeps one in his holster.

Fellers with his holstered Colt on his way to the palace.

Hideki Tojo (Shôhei Hino) is seen with a historically accurate Colt 1903 Hammerless Pistol after he fails to shoot himself.

The wounded Tojo with his left hand on the Colt.

Japanese soldiers use Arisaka Type 38 rifles, most prominently when MacArthur (Tommy Lee Jones) is greeted at Atsugi Air Base near Yokohama by a street of 2,000 Japanese soldiers on August 30, 1945. During Koichi Kido's (Masato Ibu) flashback, IJA soldiers and Imperial Guards are seen fighting with Arisaka rifles during the Kyūjō incident. Later, boxes full of Arisakas can be seen at a Tokyo harbor.

MacArthur:"Not your usual surrender formation."
Fellers:"They avert their gaze for their Emperor too, sir. They are paying you the ultimate respect."
MacArthur:"I know."
Japanese soldiers guarding the street as MacArthur arrives in Tokyo. The rifles to the right have two central barrel bands instead of one, which could be a hint that some Arisakas are mock-ups.

An IJA soldier shoots an Imperial Guard member with his Arisaka.

At least some Arisaka Type 99 are seen at the end of the movie.

US troops are armed with M1 Garands throughout the film.

US soldiers carry Garands occupy their HQ in Tokyo.

A closer, but blurry, view of an M1 Garand.

The M1 Carbine equipped with the late WWII bayonet lug is also used by US soldiers.

U.S. soldiers assembling in the HQ great hall have M1 Carbines slung over their shoulders. To the right, the bayonet lug is seen on an M1 Carbine carried by a Technician Fourth Grade (Sergeant).

Another soldier to the right walks by with an M1 Carbine over his shoulder.

The M1A1 Thompson is briefly seen carried by some U.S. troops.

Thompsons are held by the soldiers getting out of a truck.

What appears to be a Type 92 heavy machine gun is seen at the Imperial Palace. 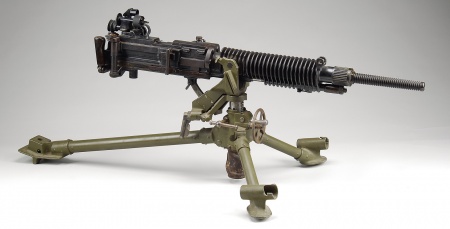 The Type 92 seen at the right at a distance.

Two Japanese Type 11 75 mm AA guns can be seen near the airbase road.

The AA guns on the left.

Type 3 wrecks on the left.

The Type 3 in the background.

A pair of Oerlikon 20mm Cannons are seen at the Tokyo harbor.

An Oerlikon on the left.

What appears to be a British Ordnance QF 2-pounder Anti-Tank Gun is seen being loaded onboard a ship. 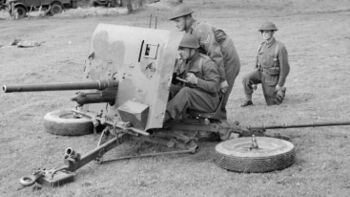