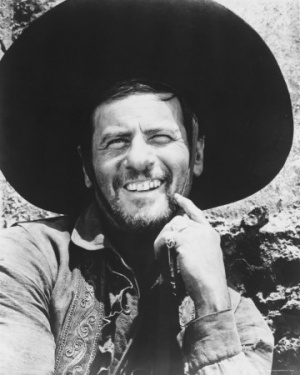 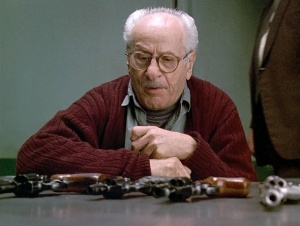 Eli Wallach as Calvera holds the SAA in The Magnificent Seven (1960).

Eli Wallach as Frankie Scannapieco holds a Tommy Gun in The Brain (1969).

Eli Wallach (born on December 7, 1915) was an American film, television and stage actor of Jewish-Polish descent. Already a Tony Award winner, Wallach became famous when cast as the evil bandit Calvera in legendary western The Magnificent Seven (1960). Director Sergio Leone would subsequently cast him in The Good, The Bad, and The Ugly (1966). He would continue to act in films for the next four decades including Mackenna´s Gold (1969), The Salamander (1981) and even reuniting with Clint Eastwood in Mystic River (2003). His final role was in the 2010 sequel Wall Street: Money Never Sleeps. Wallach passed away at the age of 98 on June 24, 2014.