Romancing the Stone is a 1984 adventure film starring Kathleen Turner as Joan, a romance novelist who gets caught up in a real life South American adventure when she is forced to find a mysterious treasure in order to rescue her sister. During her quest, she is assisted by Jack Colton (Michael Douglas), a bird smuggler. The film was directed by Robert Zemeckis (Back to the Future) and the cast included Danny DeVito and Zack Norman. Douglas, Turner and DeVito would later reunite for the 1985 sequel The Jewel of the Nile.

The following weapons were used in the film Romancing the Stone:

Jack Colton (Michael Douglas) carries a left-handed Remington 870 Wingmaster shotgun with shortened barrel as his main firearm in the film. (Michael Douglas himself is not left-handed.) In the first scene featuring the shotgun he fires it nine times without reloading, even though the gun does not hold that many rounds.

Jack Colton (Michael Douglas) firing his Wingmaster at his target who just escaped via the front of the bus.

Colton flicks the safety off his Remington. Here, the Remington logo is clearly seen.

Colton walks away with his shotgun. Note the ejection port is seen on the left side.

A good view of the shortened barrel.

A nickel-plated Smith & Wesson New Model No.3 is used by Juan (Alfonso Arau) when Jack and Joan Wilder (Kathleen Turner) go to his villa. It appears to be a Japanese contract version: [1].

Zolo turns it at Jack.

Zolo fires over the windshield.

Santos (José Chávez), one of Zolo's men, uses what appears to be a standard M1911A1 as his sidearm during the bridge scene. 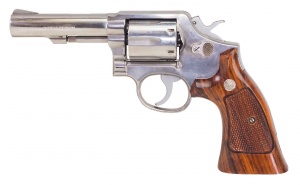 Ralph with the revolver.

One of Zolo's troops carries an IMI Uzi.

The soldier on the right holds an Uzi to Ira's head.

The soldier on the right holds an Uzi on Ira and Ralph.

An M1921 Thompson Submachine Gun is seen used by one of Ira's men.

The man on the left wields a Thompson. Note the simple front sight and muzzle, as compared with the later Thompson SMG that had an elaborate compensator.

Colonel Zolo recruit some members of the local Police Force and at least one use the FN FAL rifle.

One of Zolo's troops opens fire with the FN FAL. In this scene the gun jams and the shooter has to clear the chamber.

Several Ruger Mini-14s are used by Zolo's personnel and Ira's men. One of them is seen used by Jack Colton (Michael Douglas). These Mini-14s are 'GB' or 'Government Barrel' variants, featuring the distinctive barrel with flash-hider and bayonet lug also used on the selective-fire Ruger AC556.

Held by the soldier on the right.

Colton holding the Ruger Mini-14 while ducking around a corner.

The Mini-14 just out of Colton's reach.

Colton aims at Zolo but is out of ammo.

The Valmet M71S rifle (standing in for a Kalashnikov Variant) is seen used by Zolo's Men & Ira's Men.

A Valmet M71S is held on Jack by the soldier on the left.

A brief shot of a Valmet (middle soldier) with a full length magazine. Note also the wooden furniture.

Though very difficult to spot due to lack of screentime, one of Juans henchmen seem to carry the Winchester 1894.

The man on the far left shows his Winchester.

One of Juan's henchmen carry an unknown bolt-action rifle with a bent bolt-handle. It might be a Mauser derivative.

The henchman showing his rifle. Note the bent bolt-handle.

Same henchman and rifle, second from the right. The rifle looks like it has been shortened.