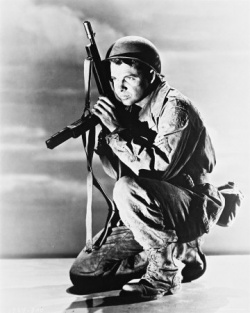 Audie Murphy was a US Army infantryman who became one of the most decorated soldiers of World War II. In addition to receiving the Medal of Honor, Murphy received thirty-two foreign and US decorations during his service. Following his retirement from the service, he came to Hollywood and acted in several Westerns. In addition, he portrayed himself in the 1955 biographical film To Hell and Back. For a more detailed biography, please visit this page.