The Smith & Wesson Model 15 "Combat Masterpiece" was in common use with police and private security officers from the 1950s to the 80s. The four inch barrel configuration was manufactured throughout its production history (1949-1999).

The Model 15, and later the stainless version, the Model 67, was issued to officers of the LAPD for many years. It was, at the same time, a standard issue to pilots in the United States Air Force as well as the Air Force Security Police. The Air Force would continue to use it for dog training, due to the lack of a blank adapter for the M9, and only began phasing them out in March of 2019 when the M17 and M18 (which had drop in blank fire kits) entered service.

It was a counterpart of the Smith & Wesson Model 10 with adjustable sights and a "target" action. It is also the "duty" version of the Smith & Wesson Model 14 "Target Masterpiece". The biggest difference between the Model 15 and Model 14 was the Model 15 had a four inch barrel and the Baughman quick draw front sight while the Model 14 was initially only available with a six inch barrel and the Patridge front sight. The Patridge was not conducive to a "snag-free" quick draw while the Baughman was.

Chambered in .38 Special only, it has only approximately 50% power of the modern .357 Magnums. This gun is also the ancestor of the Smith & Wesson Model 19 "Combat Magnum".

The Smith & Wesson Model 15 and variants can be seen in the following films, television series, video games, and anime used by the following actors: 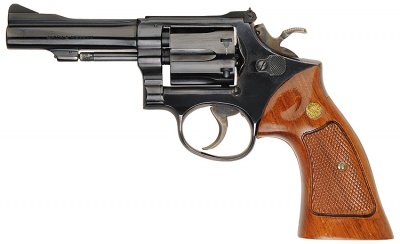 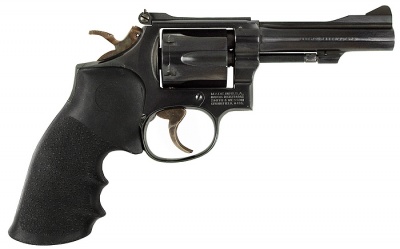 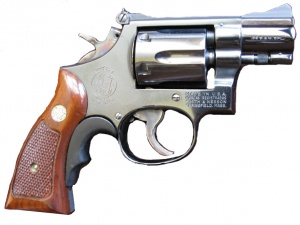