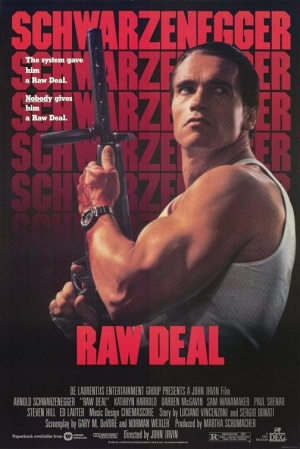 Raw Deal is a 1986 action film starring Arnold Schwarzenegger as Mark Kaminsky, a disgraced former FBI agent who is given a chance to go undercover as a mobster in order to find the government mole who was responsible for leaking information that led to the death of a witness and several FBI agents, one of which also happened to be the son of Kaminsky's friend, retired FBI Senior Agent Harry Shannon (Darren McGavin). Raw Deal was helmed by British director John Irvin, whose other works include The Dogs of War and Hamburger Hill. Raw Deal was Schwarzenegger's next film to capitalize on his hit movie Commando (1985), however it was only a moderate commercial success, owing a lot to the previous hit movie for its ticket sales. In Schwarzenegger's filmography, it is considered one of the action star's weaker films, despite the presence of several veteran actors and actresses in supporting roles and achieving a sort of cult film status for its quirky lines and action sequences. Not to be confused with the 1948 crime drama or the 1977 Western of the same name.

The following weapons were used in the film Raw Deal (1986):

In the climax of the film, Mark Kaminsky (Arnold Schwarzenegger) goes to his hotel room and unpacks an arsenal of weapons hidden in a storage bag for his suit. One of the weapons is a Heckler & Koch HK94 semi-automatic carbine, the civilian version of the famous MP5. His gun is the A3 model, which has a collapsible stock, as well as a ventilated barrel shroud, and a vertical fore grip mounted just to the front and slightly below the main sight. When he carries out his assault at the mine and later on Patrovita's hideout, the weapon is fired on full-auto, suggesting that it was converted by a Class III manufacturer to a legal full auto gun for the film. One detail that also reveals the conversion of a Semi auto carbine into a full auto gun is the lack of a paddle release for the magazine (which was standard on all original MP5s). It takes some fitting and the acquisition of a replacement H&K paddle, and many armorers just didn't bother.

Schwarzenegger is also seen brandishing this same weapon (or perhaps another, identical weapon) in publicity images and on the poster for the movie, seen above, albeit with no magazine loaded in the gun. A notable goof is that the weapon has the "slimline"-type handguard when Kaminsky is seen loading it in his hotel room, but for the rest of the film, it has the "tropical" or "wide"-type handguard. 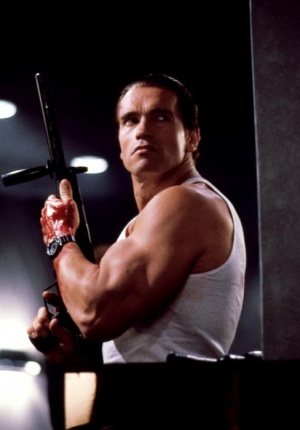 Kaminsky slaps a magazine into his HK94. Note the "slimline"-type handguard.

Kaminsky driving through the quarry, popping bad guys with his HK94 on full-auto. His HK94 now has the "tropical" handguard.

He doesn't seem to have a problem firing the HK94 with only one hand, as demonstrated here.

An International Ordnance MP2 machine pistol is used by Kaminski during the casino shootout. The International Ordance MP2 had a front grip that doubled as an extra mag holder. This portion has evidently been removed for the film. The pistol is basically a shortened STEN tube with a magwell/pistol grip very similar to that of an M-11/9mm smg. The muzzle brake aids with control on full auto fire mode, especially helpful when the foregrip was removed. 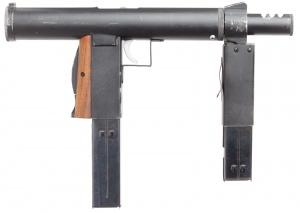 Kaminsky loads a magazine into his MP2.

An extreme close-up of the machine pistol as he puts it back in the bag.

Kaminsky grabs the machine pistol before using it to shoot out the windshield of his car.

Kaminsky opens fire on the mobsters with his MP2.

The mobsters are also seen wielding submachine guns that might appear at first to be Uzis (some with fixed wooden buttstocks, others with folding stocks). However, a close-inspection of the receivers reveals that they are actually MAC-10s that have been visually modified to resemble the Uzi, fitted with Uzi barrels, front and rear sights, forward grips, and stocks. These exact same prop weapons also appear in several other Hollywood movies, including The Dogs of War, The Killer Elite (1975) and Stripes.

In the opening hit on a mob witness, a mobster opens fire with the MAC-10 mocked up to resemble the Uzi. This particular weapon is fitted with a fixed stock.

A close-up of the same mobster's "Uzi".

When a bus pulls up and opens fire on Patrovita and his bodyguards, the distinctive barrel and forward grip of the fake Uzi is seen as one of the machine guns.

In the final casino shootout, Kaminski uses the mock Uzi. His "Uzi" is fitted with the adjustable stock.

One of Petrovita's soldiers fires on Kaminski with an actual MAC-10 in the final casino shootout.

The mobster on the left opens fire on Kaminsky with his MAC-10.

One of the other weapons which Kaminsky has in his suit storage bag is a Dan Wesson Model 15 revolver. Most notably, he uses the weapon to kill the driver of a huge off-road dump truck who is trying to run him down while he's holed up in a trailer. 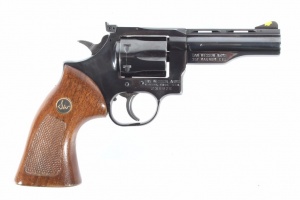 Kaminsky checks the load in his Dan Wesson revolver

Raising his Dan Wesson revolver with one hand, Kaminsky prepares to finish off the truck driver.

Several Patrovita soldiers use Dan Wesson Model 15 in the final shootout with Kaminsky. 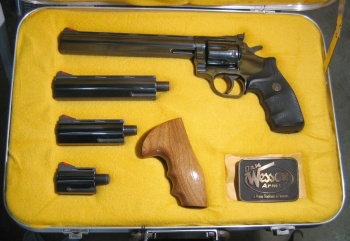 One of Patrovita's soldiers (Sven-Ole Thorsen) gets ready to take on Kaminsky with his Dan Wesson revolver.

A Patrovita soldier fires his Dan Wesson. His handgun has a squared lug which is a characteristic of Dan Wesson revolvers.

One of Patrovita's soldiers fires a Smith & Wesson Model 10HB.

A Patrovita soldier fires his S&W.

Harry hits the ground with his Colt after he's wounded in the ambush.

A Smith & Wesson Model 15 is held by one of Patrovita's soldiers during the Chicago PD raid on a hideout.

A Smith & Wesson Model 15 is held by one of Patrovita's soldiers during the Chicago PD raid on a hideout.

FBI Special Agent Blair Shannon (Steve Holt) is seen holding a Smith & Wesson Model 15 Snub in the beginning of the film. At the end, Kaminsky takes a S&W off the floor and gives it to Baxter (Joe Regalbuto), telling him to "resign or be prosecuted". Chicago cop Baker (Ed Lauter) also carries a Smith & Wesson Model 15 Snub during the apartment raid on Petrovita's men.

The revolver seen on the casino floor.

"Resign or be prosecuted. Any way you want it." Kaminsky takes a S&W off the floor and gives it to Baxter. 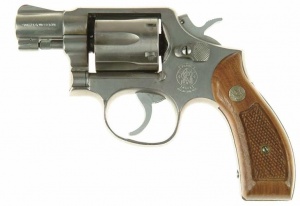 Patrovita and his soldiers prepare to take on Kaminsky.

Patrovita is on the left side with his Smith & Wesson.

A female Chicago undercover cop surprises a Patrovita lookout by drawing a Charter Arms Off Duty revolver on him. It could either be the undercover, or the off duty. 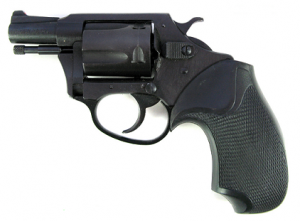 Kaminsky uses a 3-inch barreled Astra 357 in some scenes of the movie. 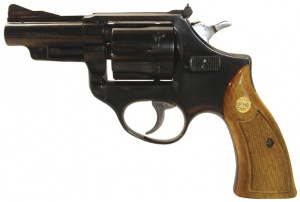 An Astra 357 with a 3 inch barrel is pulled out by Kaminsky. Note the shape of the hammer and the rounded front of the frame, different of the square frame of the S&W N-frame

The Astra 357. is pulled on the limo driver. Note the distinctive shape of the hammer

A stainless Colt M1911A1 is held by one of the Chicago police officers during the raid on the Patrovita hideout.

On the far right, the officer in red holds the pistol.

The last weapon in Kaminsky's weapons cache is a Mossberg 500AT shotgun fitted with a riot barrel with a heavy choke and a pistol grip. This is likely the same shotgun used in Code of Silence.

Kaminsky (Arnold Schwarzenegger) works the action on his Mossberg 500AT.

Kaminsky's Mossberg 500AT Shotgun cocked and ready for action.

Kaminsky uses his Mossberg to take out Patrovita.

What appears to be a Mossberg 500 shotgun is carried by one of the Chicago police officers during the raid on a Patrovita hideout.

The shotgun held by the officer during the raid.

One of the mob hitmen at the film's beginning uses a 12 Gauge Double Barreled Shotgun to eliminate one of the FBI agents. A sawed off double barreled is used during the attempt on Harry's life.

One of the mob hitmen at the film's beginning uses a 12 Gauge Double Barreled Shotgun.

A sawed off double barreled is used during the attempt on Harry's life.

Among the weapons carried throughout the film by the mobsters are MGC M16 assault rifles - identifiable by the fact that they don't fire and they have the fake forward assist and upside down three pronged flash hider.

The MGC M16 Assault rifle: a non-firing metal replica built by the Model Gun Corp of Japan and one of the most used non-firing replicas of the M16 in movies and television.

One of the thugs at the mine brandishing an MGC M16 replica, identifiable by the fake forward assist and upside down three-pronged flash hider.

When the Patrovita guard fires on Kaminsky, the MGC is changed out for an M16A1.

The same thug aims his M16A1 at Kaminsky's car.

The same thug fires at Kaminsky's car. Note that the MGC is changed out for an M16A1 as the shells are seen ejecting from the side.

The mobsters are also frequently seen using some type of CAR-15 variation that appears to resemble an XM177, but it's actually a converted AR15 SP1 carbine made to look like an XM177. These are the same guns seen in The Dogs of War (Special Effects Unlimited, the company which supplied weapons for that film, were also the armorers on this film).

One of the quarry thugs firing at Kaminsky's car with a CAR-15-type gun.

Kaminsky fires the Sporter in the casino shootout.

Marvin Baxter (Joe Regalbuto) grabs a discarded Sporter when he sees Kaminsky coming towards him.

Another mob hitman is seen sniping with a semi-automatic rifle fitted with a suppressor and scope. This is either a military M14, or (more likely) an M1A, the semi-automatic civilian version of the M14 (manufactured by several manufacturers over the years, but the term M1A is copyrighted to Springfield Armory. Other makers of the Semi-auto M14 rifle are Federal Ordnance, Fulton Armory, Rock Island Armory and Norinco/Poly Technologies of China.)