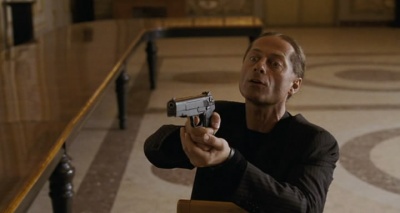 Levan Uchaneishvili with a Dracula md. 98 pistol as Jensen in Shadow Man (2006).

Levan Uchaneishvili (born December 15, 1958) is an Soviet, Georgian and American actor. In 1980s he appeared in Soviet movies and in 1990s moved to USA where appeared in such movies as Independence Day, Air Force One, Blade and Virus. In 2000s he again appeares in Russian and Georgian movies.