Tough Guys is a 1986 comedic crime film directed by Jeff Kanew (V.I. Warshawski) and marked the final pairing of legendary actors Burt Lancaster and Kirk Douglas, who star in the film as Harry Doyle and Archie Long, two aged criminals who are released from prison after a 30 year sentence and decide to pull off one last heist.

The following weapons were used in the film Tough Guys:

During the scene in the bank two robbers (Larry Mintz and Dick Hancock) are armed with Smith & Wesson Model 19 Snub Nose revolvers. Harry and Archie disarm them and somehow manage to keep the guns for themselves, using the revolvers during the armored track robbery and the highjacking on the train. In Harry's dream Sgt. Deke Yablonski (Charles Durning) holds same looking revolver. The same revolvers are also seen in hands of LAPD officers, Sheriff deputies and Border Patrol agents. 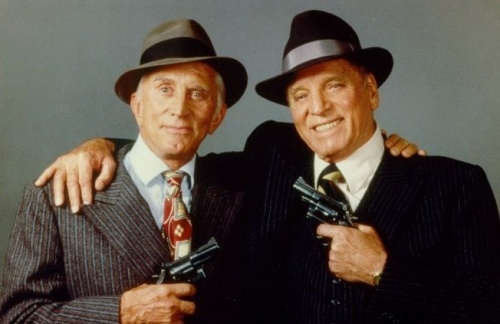 Archie and Harry hold their revolvers in a promotion still.

He threatens Harry. The grip can be seen.

Now the situation has changed to the opposite.

Archie picks up the revolver of incapacitated robber.

Harry aims his revolver at armored truck guard. Due to a continuity error in this scene his revolver switches from Model 19 to Model 36 and then back again.

In Harry's dream Yablonski, dressed as the train engineer, aims the supposed Model 19.

Harry holds the revolver during the highjacking of the train.

A deputy at the right aims his revolver.

A Border Patrol agent aims his revolver at approaching train.

Harry surprises the armored trucj guard with his revolver.

Belle (Alexis Smith) disarms Yablonski, taking him for a hitman.

Jimmy Ellis draws his revolver when Harry and Archie remember him about the "old good time".

Two men at the left and the one at the right are armed with supposed S&W Model 15 revolvers.

The guard at the left holds the Python.

Some revolvers are seen only partially so they hardly can be identified.

A revolver with engraved grips is partially seen during the opening credits.

A holstered revolver of a prison guard is seen at the left.

An M1911A1 is partially seen during the opening credits. In the final scene several sheriff deputies and border patrol agents are armed with M1911s. The Mexican police captain (Rick Garcia) carries a bright chrome plated M1911.

A magazine and lot of pistol and revolver cartridges are seen during the opening credits.

A sheriff deputy (at the left) aims his 1911 at approaching train.

The Mexican captain holds his bright 1911.

When Harry and Archie visit their old buddy Dick Schultz (Simmy Bow), the latter draws the M1911A1 on them. Next moment the pistol reveals itself as a toy gun.

Schultz opens the door. The pistol is tucked in his pants.

The second armored track guard carries Uzi SMG. He is disarmed by Archie who uses the Uzi during the train highjacking.

Archie takes the Uzi from the guard.

Elderly, short-sighted hitman Leon B. Little (Eli Wallach) carries the Sawed-Off Double Barrel Shotgun throughout the moive. In the scene in the train his gun is briefly hold by Richie Evans (Dana Carvey).

The first appearance of Leon B. Little.

Leon fires his shotgun in the scene in the train.

Richie holds Leon at gunpoint with his own gun.

The sawed-off stock is seen.

Mossberg 500 shotguns are used by LAPD officers and sheriff deputies.

The Mossberg 500 is seen in the police car.

What appears to be the Mossberg 500 is seen at the far right.

A police officer fires his shotgun.

A deputy holds the Remington 870.

Another deputy with the Remington 870.

A SWAT officer appears from the car with AR-15 Sporter in hands.

SWAT officers with AR-15s on the bridge. A sniper in center is armed with bolt action rifle.

A close view of the AR-15 Sporter in hands of a SWAT officer.

A SWAT officer fires his AR-15 in semi auto mode. The spent brass is seen in midair.

Another good view of the AR-15 Sporter.

A Sheriff's deputy holds the AR-15 Sporter with sniper scope.

Mexican policemen aim their M16s (supposedly the same AR-15 Sporters) at the background.

A police sniper is armed with what appears to be a Steyr SSG 69.

A sniper is seen in center.

He aims the rifle.

Another view of the gun.
Retrieved from "https://www.imfdb.org/index.php?title=Tough_Guys&oldid=1443507"
Categories: