The following weapons were used in the film Jaws:

Quint (Robert Shaw) keeps an M1 Garand aboard his boat and is seen using it during the shark's night attack. Chief Martin Brody (Roy Scheider) uses the Garand against the shark at the climax of the film. Several Coast Guardsmen are also armed with M1s, most notably when they surround the two boys wearing a fake shark fin.

Quint (Robert Shaw) fires his M1 Garand at the shark when it rams Orca during the night.

Brody with his Garand slung.

Brody fires Quint's M1 Garand at the shark as it charges the sinking Orca in the climax.

A very good side view of the M1 Garand as Brody fires it.

"Smile you son of a...!" Brody fires the last shot from the Garand, ejecting the clip.

One of the men patrolling the waters on the Fourth of July is armed with an M1 Carbine. The rifle, which is often without a magazine loaded, appears to be fitted with adjustable rear sights as seen on post-WW2 M1 Carbines, but without the bayonet lug.

On the left, one of the men patrolling the waters on the Fourth of July is armed with an M1 Carbine.

Note the man carries his rifle without the magazine loaded.

When posing with what they believe to be the shark causing all the carnage, one of the men in the group (at the far right) carries what appears to be an Carcano M91/41. Not implausible; the movie was filmed in 1974 and war souvenir firearms were still very plentiful and affordable.

When posing with what they believe to be the shark causing all the carnage, one of the men in the group (at the far right) carries what appears to be an Carcano Rifle.

The rifle is seen on the far right.

In a deleted scene, the laughing shark hunter holds the rifle.

A Remington 700 is seen in the hands of another shark hunter posing with the shark. In a deleted scene, this person is seen holding the rifle as he fights with other hunters on the waters.

A Remington rifle is held by a hunter standing near the shark.

On the far left, a Remington 700 is seen in the hands of another shark hunter posing with the shark.

In a deleted scene, the shark hunter uses the rifle to fight with other hunters on the waters.

In a deleted scene, the shark hunter aims the rifle.

Winchester Model 1892 rifles are seen in the hands of some shark hunters as well as some of Brody's deputies.

The hunter in the light blue jacket holds the Winchester.

On the right, deputies aim their rifles at the two boys wearing fake shark fins.

The Winchester is seen on the right.

Another shark hunter is seen with what appears to be a a Winchester Model 62 .22 LR pump action rifle

The man in the glasses just behind Brody holds what appears to be a .22 Winchester rifle.

Chief Brody (Roy Scheider) uses a Smith & Wesson Model 15 revolver as his issued sidearm and uses it to fire several shots at the shark as it passes the Orca.

Chief Brody (Roy Scheider) checks his S&W Model 15 when the shark rams into the Orca during the night.

Brody fires his Model 15 at the shark as it passes the Orca.

A closeup shot of Brody aiming his revolver at the shark. As seen in the film's outtakes, this particular revolver failed to fire more than a few times, much to the frustration of actor Roy Scheider.

A deleted scene shows a shark hunter firing into the water with the revolver.

During the chaotic point in the movie, when the fishermen descend on the town in search of the reward on the shark, one of the hunters carries what looks like a Stevens 311A 12 Gauge Double Barreled Shotgun. This is from a deleted scene that can be viewed in the 30th Anniversary Edition's extras features.

The shark hunter in the blue jacket and hat on the left carries the shotgun.

In a deleted scene, Brody makes sure that the same shark hunter has a permit for his double barreled shotgun.

In a deleted scene, a shark hunter is seen with the shotgun.

What appears to be a field variant of the Ithaca 37 is used by another shark hunter in a deleted scene.

The shark hunter with the long-barrel Ithaca 37.

The hunter wields the shotgun.

The harpoon gun used by Quint (Robert Shaw) is a Greener Light Harpoon Gun with a nickel finish. He stores the rifle in its original take-down case, and the line holder has been removed from the forend and the reel is instead attached to the ship to handle bigger fish like sharks. 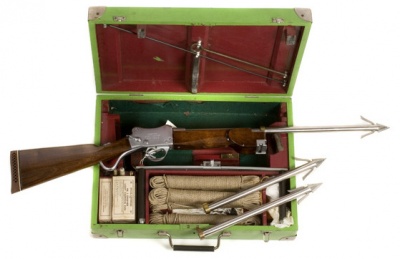 Quint with his Greener Light Harpoon Gun when he waits for Hooper (Richard Dreyfuss) to tie up the barrels.