John Turturro holds a nickel plated M1911A1 as Aspanu Pisciotta in The Sicilian (1987). 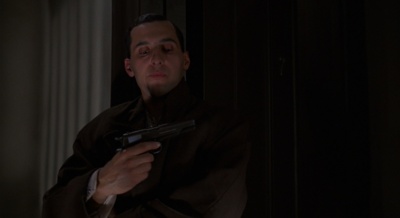 John Michael Turturro (born February 28, 1957) is an Italian-American actor, writer and director who has appeared in several films directed by Spike Lee, including Do the Right Thing (1989), Mo' Better Blues (1990) and Jungle Fever (1991) as well as several films directed by the Coen Brothers, including Miller's Crossing (1990) and Barton Fink (1991), The Big Lebowski (1998), O Brother, Where Art Thou? (2000) in addition to his role as Agent Reggie Simmons in four Transformers films. He won an Emmy award for his role as brother Ambrose Monk in the television series Monk. He also is the older brother of actor Nicholas Turturro and cousin of actress Aida Turturro.