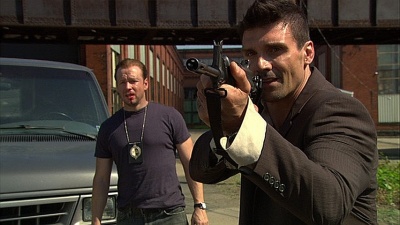 Frank Grillo wields a Steyr AUG A3 as Brock Rumlow in Captain America: The Winter Soldier (2014).

Frank Grillo is an American actor who has appeared in such films as Boss Level, End of Watch and Homefront (2013) in addition to his role as Leo Barnes in two features within The Purge film series. He also appeared as Brock Rumlow, aka "Crossbones" in several films within the MCU. He returned to voice Rumlow in the Disney+ animated series What If...?.