Survival of the Dead

The following firearms can be seen in Survival of the Dead: (2010) 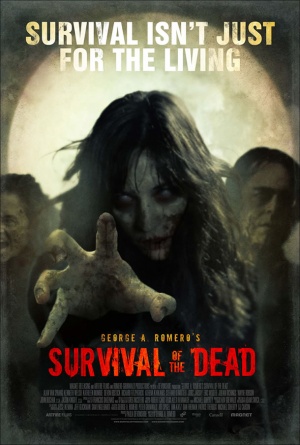 The Single Action Army is used by several characters. It's the weapon of choice for Sgt. Crocket (Alan Van Sprang) and Seamus Muldoon (Richard Fitzpatrick).

The Smith & Wesson Model 15 is used by James O'Flynn (Julian Richings) throughout the movie.

A distraught husband uses a Smith & Wesson Model 28 on his wife to prevent her from coming back.

A Smith & Wesson Model 19 is used by D.J. (Josh Peace) to bust open a lock near the end of the movie.

What appears to be a Smith & Wesson Model 10 is used by a fisherman as part of his "catch & release" program.

What appears to be a Beretta 92 F/FS is used by Patrick O'Flynn (Kenneth Welsh) and Tomboy (Athena Karkanis).

O'Flynn (Kenneth Welsh) with his Beretta.

While searching cars on a ferry for zombies the former soldiers find a woman who decided to go out on her own terms with the use of a Glock 17.

A Remington 1866 Derringer is Patrick O'Flynn's (Kenneth Welsh) ace up his sleeve. 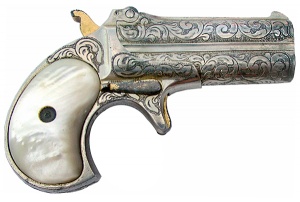 O'Flynn (Kenneth Welsh) gets the drop on Sgt. Crocket (Alan Van Sprang) with his Remington 1866 Derringer.

Sgt. Crocket (Alan Van Sprang) uses what appears to be a Webley & Scott Flare Pistol to dispatch a zombie. 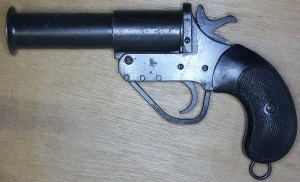 Sgt. Crocket (Alan Van Sprang) with his Webley and Scott Flare Pistol. Just another day at the office.

It appears that the former National Guardsmen are using M16A4 rifles.

Sgt. Crocket (Alan Van Sprang) makes sure that O'Flynn (Kenneth Welsh) knows that he is unhappy with him.

Tomboy (Athena Karkanis) aims her M16A4. In this scene, it appears to be a rubber prop.

Tomboy with her M16A4 in action.

The Winchester Model 1866 "Yellow Boy" is Muldoon's (Richard Fitzpatrick) weapon of choice and he carries it throughout the movie.

Muldoon (Richard Fitzpatrick) and his men.

At the beginning of the movie Patrick O'Flynn (Kenneth Welsh) uses a Winchester Model 1873 "Short Rifle" with the octagon barrel.

Multiple characters use the Winchester Model 1894.

It appears that one of Muldoon's (Richard Fitzpatrick) men uses a Mossberg 500 throughout the movie.

A Short barreled Side by Side Shotgun (Sawed Off) is used by a murderous redneck. It's interesting to note that it almost looks exactly like the one used by Denzel Washington in Man on Fire.

At the beginning of the movie one of Patrick O'Flynn's men uses a 12 Gauge Double Barreled Shotgun.

12 Gauge Double Barreled Shotgun can be seen on the right.