Fire Birds (also known as Wings of the Apache) is a 1990 action film starring Nicolas Cage and Tommy Lee Jones as US Army Apache helicopter pilots who battle drug cartels. With support from the Department of Defense, the film was one of the first to feature the actual AH-64 Apache.

The following weapons were used in the film Fire Birds:

There are several appearances in the film of the M1911A1, first in the hands of the drug cartels' mercenary pilot Eric Stoller (Bert Rhine) in briefing photos of him, then seen in holsters on South American & U.S. Drug Enforcement Agency operatives during the mission towards the end of the film. Little can also briefly be seen carrying one when he arrives in South America. 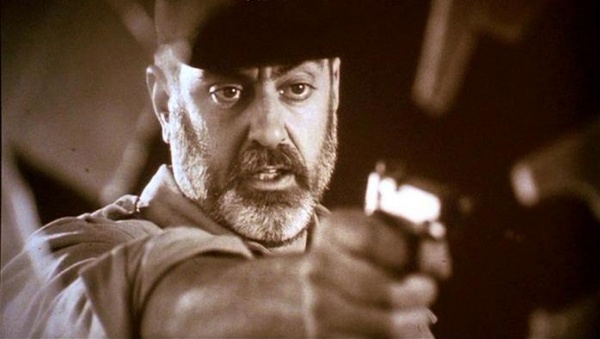 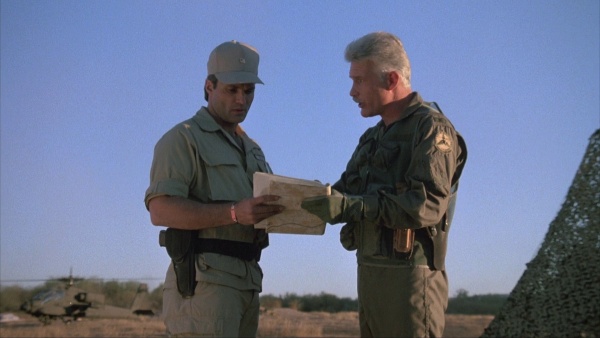 A South American operative (left) with a holstered M1911A1. 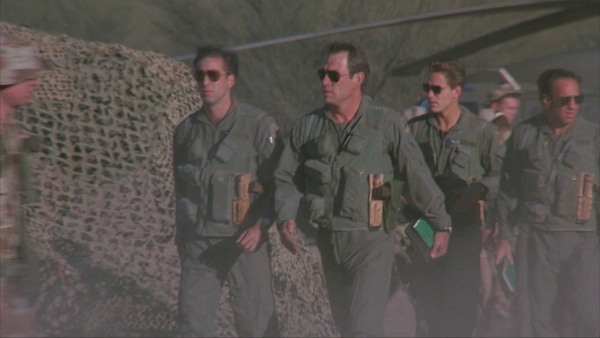 Most of the U.S. helicopter pilots can be seen armed with Smith & Wesson Model 15 revolvers as their sidearms, another anachronism since Army chopper crews would carry semi-automatics such as the M1911A1 or M9 Beretta as their issue sidearms in the time the movie is set (1990). 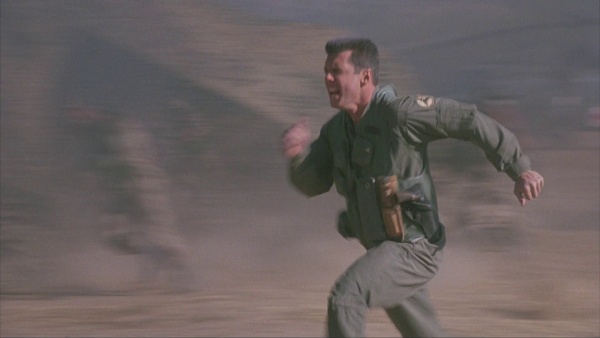 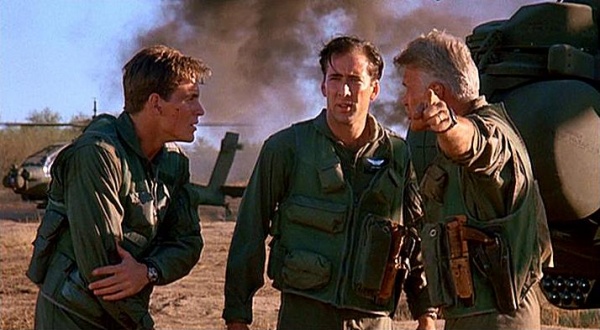 There are several appearances of IMI Uzi submachine guns in the film, primarily in the hands of South American operatives, as well as Stoller in a briefing photo. 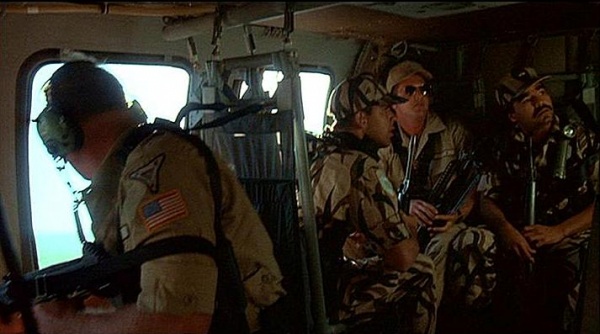 A U.S. DEA agent (left) armed with an Uzi 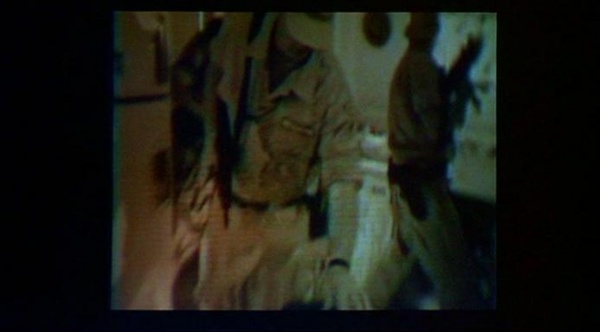 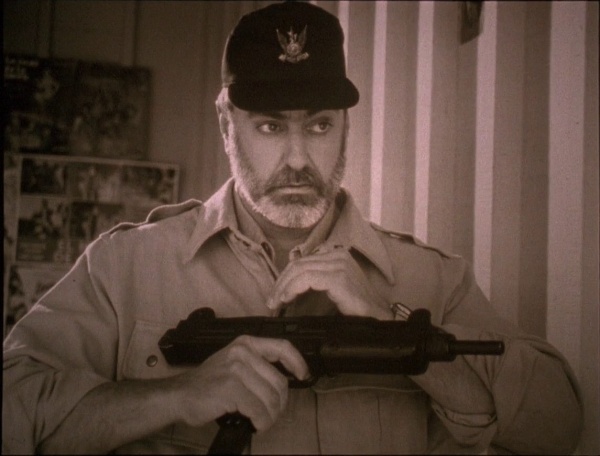 Eric Stoller brandishing an Uzi in a briefing photo. Note that the folding stock appears to be removed in this shot

During the mission near the end of the movie, U.S. Army soldiers can be seen carrying M16A1 Rifles, though none are fired on-screen. The M16A1 was transitioned out for the M16A2 during the time of the film, set in the early 1990s. 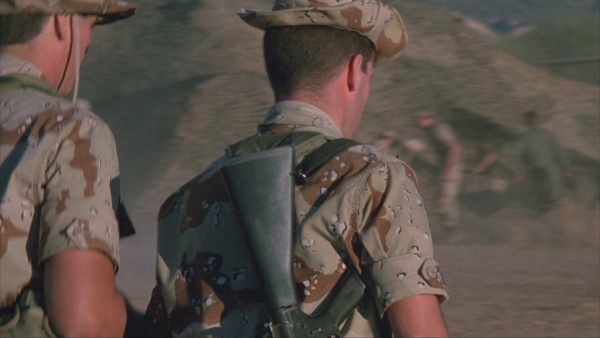 A U.S. Army soldier carries an M16A1 slung on his back 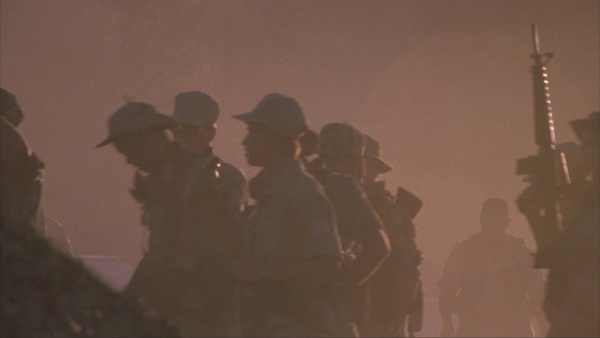 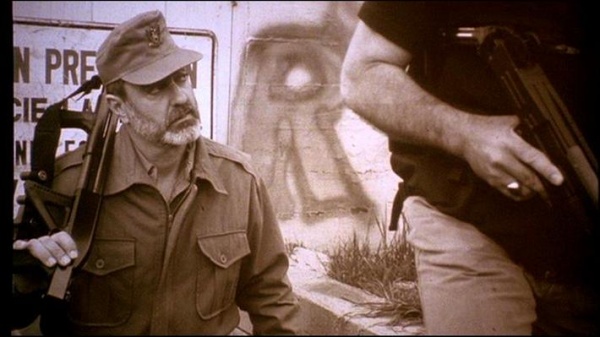 Stoller carrying a customized Smith & Wesson 3000 in a briefing photo

At the beginning of the film, a member of an ill-fated D.E.A./South American anti-drug operation can be seen carrying an M60 machine gun while riding in a UH-60 Blackhawk helicopter which is shot down by Stoller. 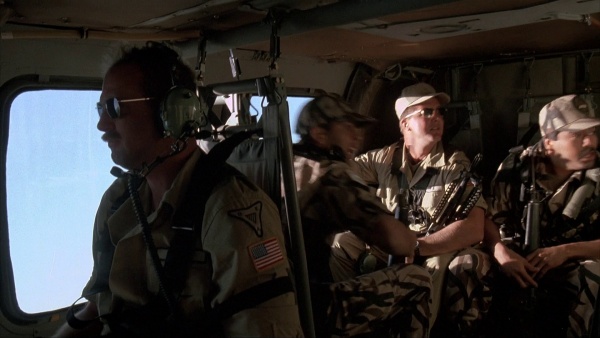 As the primary antagonist of the film, Eric Stoller flies a "Scorpion attack helicopter" (in reality a McDonnell Douglas MD 500 Defender) armed with a 2.75" rocket pod and a Browning M3 heavy machine gun in a SUU-12/A gun pod. Stoller uses this pod to shoot down Little's AH-64 Apache by knocking out the tail rotor and damages Chief Warrant Officer Jake Preston (Nicolas Cage)'s Apache, resulting in his gunner, Chief Warrant Officer Calvin Breaker (Bryan Kestner) being wounded when a round penetrates the cockpit. 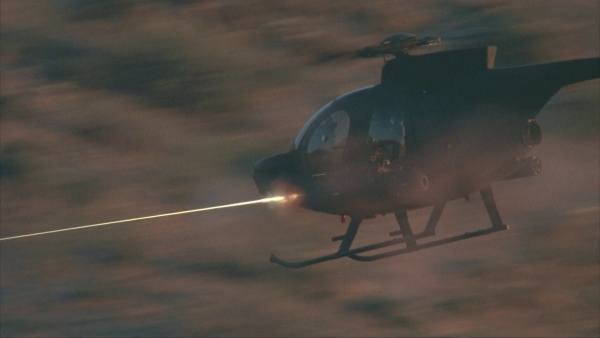 At the beginning of the film, Preston can be seen flying a Cobra attack helicopter armed with two nose-mounted GE M134 Miniguns in the M28 turret system. The Cobra proves to be no match for Stoller's Scorpion and Preston barely escapes alive. This is an AH-1S (MOD) variant (see note below), the first of four AH-1S variants. The other three were later re-designated P, E, and F in the late 1980s after the retirement of UH-1 Huey variants freed up some letter designations. This unusual weapon configuration was previously used on the original AH-1G Cobra while most other Cobra variants replaced this armament with the M197 Vulcan 20mm rotary cannon.

Special Note: The aircraft pictured is an AH-1S (MOD) belonging to the 1-285 Attack Helicopter Battalion that was stationed at Silverbell AHP, Marana, AZ. You are correct that the dual minigun configuration for the M28 turret is unusual. Ordinarily the left hand gun would be a 40mm grenade launcher. However we went with the dual minigun because it looked "cool". In practice the left hand minigun was prone to jamming, additionally the 40mm was an excellent suppressive weapon and was actually more reliable in combat. By the way, that's me in the back seat (User:132.79.9.16). 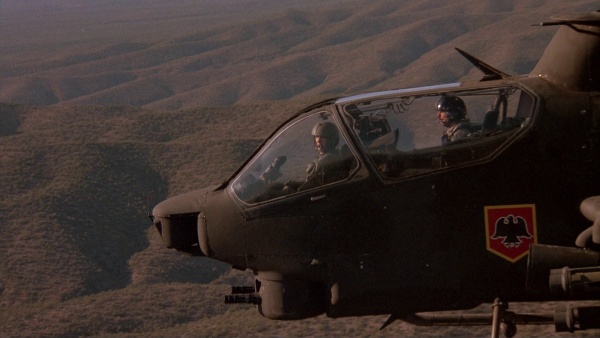 The secondary weapon of the AH-64 Apache throughout the film is the M230 Chain Gun. The M230 is used alongside the Apache's 2.75" unguided rockets during air to air engagements (even though the Stinger missiles mentioned below would be a far better choice against aircraft than unguided rockets). 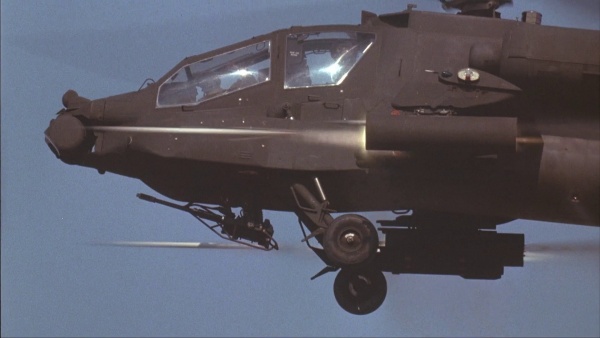 An Apache fires a volley of 2.75" unguided rockets with the M230 chain gun visible. 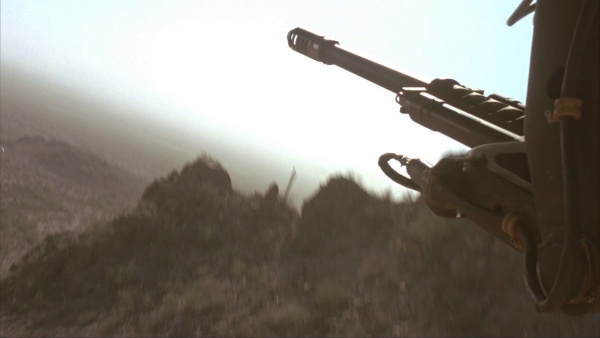 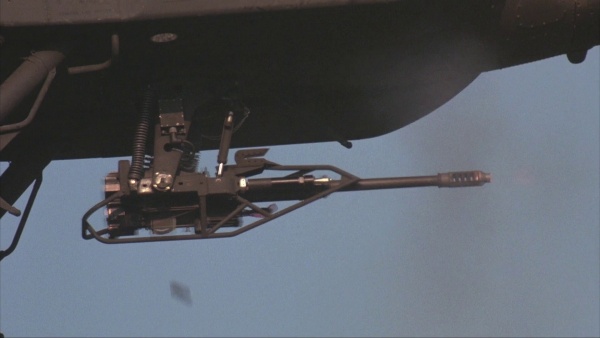 The M230 chain gun being fired.

In addition to the M230 chain gun mentioned above, the Apache helicopters in the film are also armed with FIM-92 Stinger missiles when deployed to South America. After the Apache flown by Chief Warrant Officer Brad Little (Tommy Lee Jones) is shot down, CWO Billy Lee Guthrie (Sean Young) lands her helicopter to assist him, and the two are attacked by an enemy J35J Draken fighter jet. Little then instructs her to remove one of the still-functioning Stinger missiles from his AH-64 Apache and attach a gripstock unit to it so it can be shoulder-launched: this is readily possible as the air-launched Stinger (AIM-92 or Stinger ATAS) is identical to the ground version, even retaining the sighting unit. This is one of the earliest appearances of an actual FIM-92, as previous launchers seen in film and television were actually the discontinued FIM-43 Redeye. It is also a rare case of a Stinger in film appearing with a real gripstock unit, rather than a fabricated one fitted to a spent launch tube. 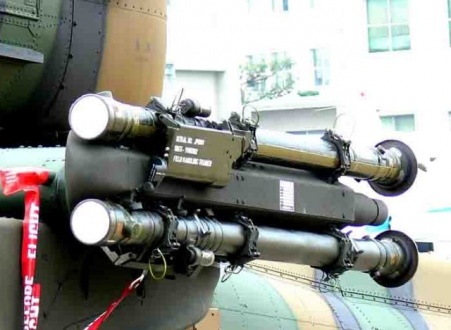 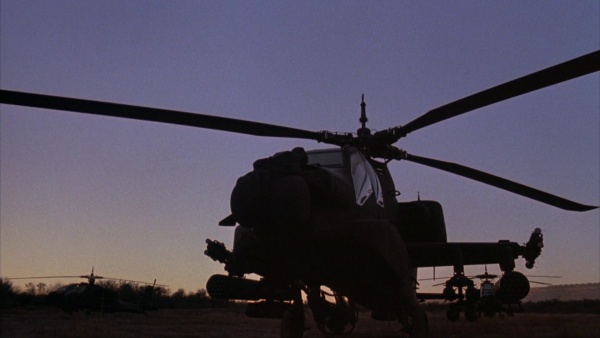 An AH-64 Apache with four Stinger missiles mounted two each on the wingtips. 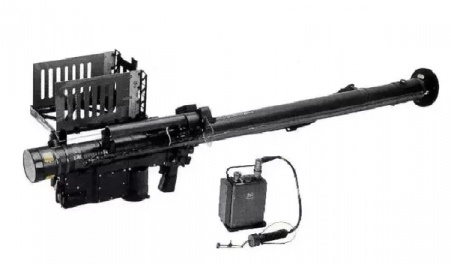 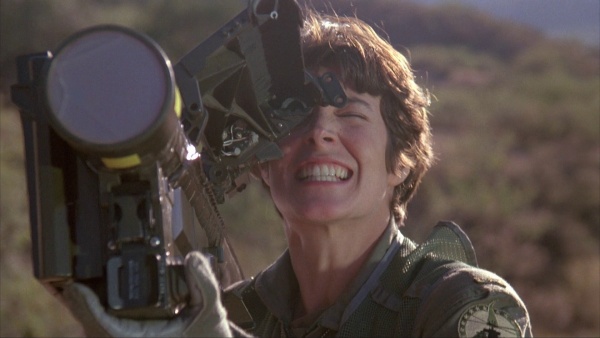 CWO Billy Lee Guthrie aims the salvaged FIM-92 Stinger at the enemy fighter jet. Unlike most films, the gripstock unit is a real one with a front-mounted latch assembly.

In addition to the nose armament, Preston's Cobra is also armed with eight BGM-71 TOW missiles mounted in groups of four on the outboard pylons. These missiles are not fired though, as Preston has no chance to return fire during Stoller's ambush. 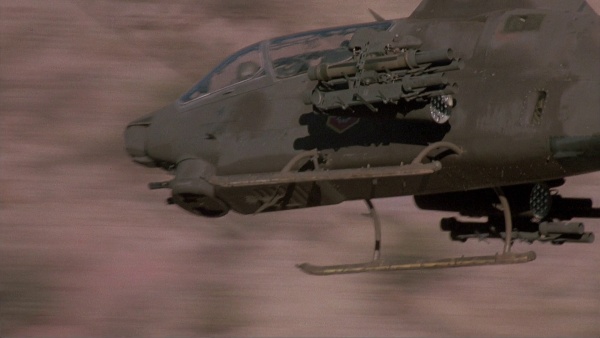 The AH-1S Cobra is seen armed with BGM-71 TOW missiles.

At one point in the film, Little devises an unorthodox method of helping Preston overcome his eye dominance problem which is hindering his training on the Apache; blindfolding his dominant eye and forcing him to drive a Humvee at high speed using only his other eye, the protagonists having several near-misses with other vehicles on the base, including an M2 Bradley armed with an M242 Bushmaster chaingun. 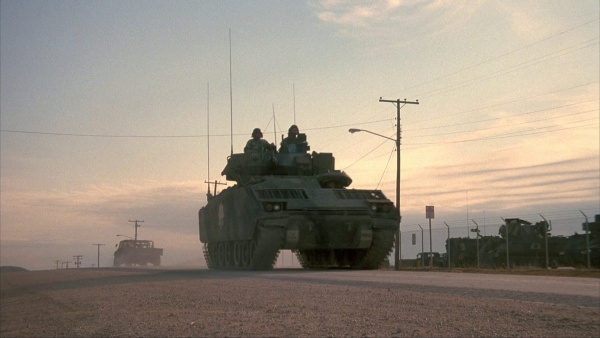 Preston has a near-miss with an M2 Bradley, armed with an M242 Bushmaster chaingun. The Bradley's twin TOW missile launcher can also be seen folded on the side of the turret

The J35J Draken that attacks Little and Guthrie can be seen armed with ADEN cannons as its primary armament, firing them at the pilots several times, though fails to score any hits before being dispatched by Guthrie. 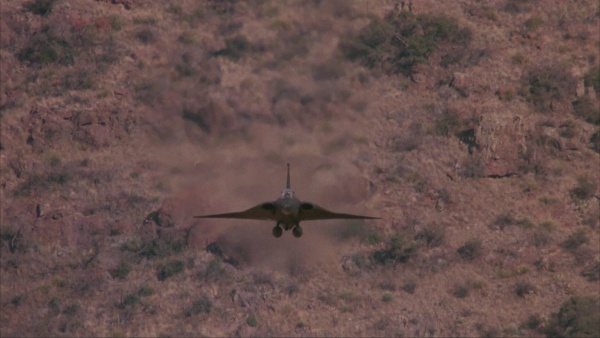 The J35J Draken can be seen armed with ADEN cannons as its primary armament.
Retrieved from "https://www.imfdb.org/index.php?title=Fire_Birds&oldid=1368354"
Categories: