Cash Truck (USA release title; the original title is Le convoyeur) is a 2004 French crime movie directed by Nicolas Boukhrief. The main character, Alexandre Demarre (Albert Dupontel), starts his work as a guard for an armored cash transport car company. The company was the victim of three robberies during the last year, and Alex Demarre seems to have some connection with these robberies...

In 2021, a Hollywood remake of this film directed by Guy Ritchie was released under the title Wrath of Man.

The following weapons were used in the film Cash Truck: 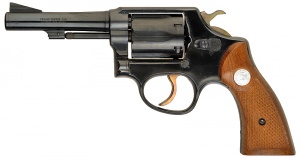 A revolver is seen in the armory.

He aims at empty space but is told by his partner Jacques Mazard (Jean Dujardin) (in the car) not to do it.

Alex at the shooting range.

Demarre's revolver is disassembled for cleaning.

Alex holds his revolver during the attack on the armored car.

A wounded La Belette (Julien Boisselier) fires his revolver in the final scene.

In one scene, Alex Demarre (Albert Dupontel) fires a Smith & Wesson Model 15 at the shooting range.

When the armored car is attacked, one of the guards (uncredited) is seen with a Smith & Wesson Model 28 revolver.

The guard draws his revolver.

A closer (though a little blurry) view at the revolver.

A close view at the business end of Mazard's revolver.

One of the Arab robbers who tries to rob an armored car carries a snub nose revolver with target sights.

Various unidentified revolvers are seen in the armory.

The armorer (Michel Trillot) holds a snub nose revolver. Four more revolvers are seen behind him.

The armorer (Michel Trillot) is seen with a snub nose revolver in several scenes.

The armorer examines his revolver.

The armorer fires his revolver in the final scene.

Heckler & Koch USP pistols are carried by several robbers in the flashback and in the final scene. They are fitted with sound suppressors and sometimes with tactical flashlights. In the final scene, Alex Demarre (Albert Dupontel) and Jacques Mazard (Jean Dujardin) also use USP pistols, taken from slain robbers.

The leader of the gang of robbers (Karim Traikia) holds a USP during the flashback scene.

He fires his pistol. 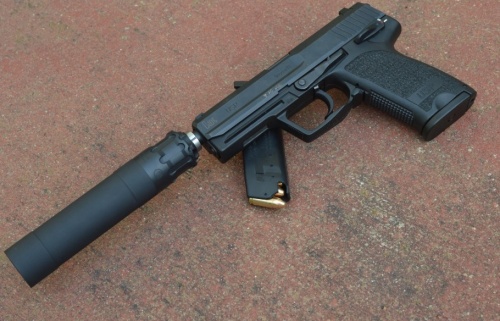 A robber and Alex Demarre fire at each other. Both are armed with suppressed USPs.

A wounded robber tries to reach for his pistol.

The leader of the robbers aims his pistol.

Jacques Mazard with a suppressed USP.

In the final scene, all of the robbers are armed with FN P90 SMGs, mostly fitted with sound suppressors.

A suppressed P90 is seen next to Alex Demarre's head.

A robber fires his P90 at a guard inside the armored car.

The leader of the robbers (Karim Traikia) holds his P90.

During the struggle between Alex Demarre and the lead robber, the P90 appears to be substituted with a rubber prop.

The barrel and suppressor of the P90 is bent.

In the next moment, they are straight again.

In the flashback scene, several robbers are armed with Heckler & Koch MP5A3 SMGs.

A robber aims his MP5 at Alex Demarre. Another robber with an MP5 stands next to the armored car.

A robber with MP5A3 runs to the armored car...

...and fires through the broken window.

Remington 870 Field Gun pump-action shotguns are used by Nicole (Claude Perron), Bernard Jaubert (François Berléand), and some other guards. This gun is a left-handed model.

Nicole, the only female guard, takes a shotgun from the armory. Several more shotguns are seen in the background.

A closer view at the pump.

A shell holder is seen on the buttstock of Bernard's shotgun.

Bernard (in the foreground) and Butagaz (Gilles Gaston-Dreyfus) (in the background) with shotguns.

A closer view at Bernard's shotgun.

Bernard fires at Arab robbers with the battlecry "Charles Martel!"

Nicole with the shotgun.

Bernard aims his shotgun in the final scene.

Bernard is blinded with a flashbang grenade.

Bernard holds his shotgun during the end credits.

A sawn-off Remington 870 shotgun is used by one of the Arab robbers during the attempted robbery of an armored car.

A robber waits in ambush.

A close-up view of the muzzle.

A Double Barreled Shotgun is seen in the armory.

A double barreled shotgun is seen behind the armorer (Michel Trillot).

A Sawn-off Double Barreled Shotgun is used by one of the Arab robbers during the attempted robbery of an armored car.

A robber at the left holds a sawn-off shotgun.

He fires his weapon.

A flashbang grenade on the floor. 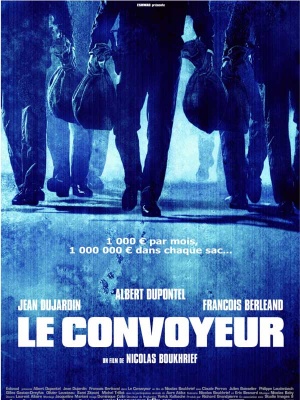