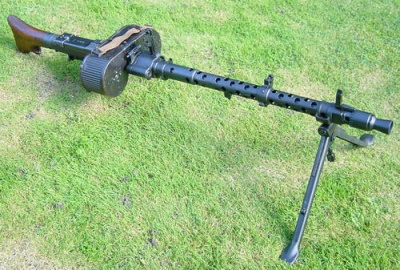 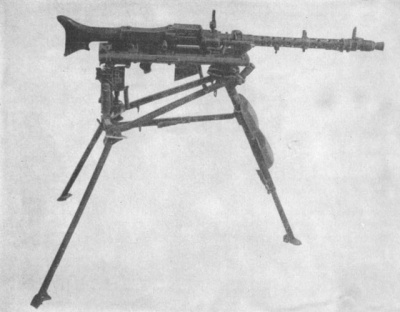 The MG34 is a general-purpose machine gun produced by Germany during the Second World War. The forerunner of the more widely produced MG42, the weapon was noted for long production times due to use of time-intensive machined parts, but remained in production alongside its replacement throughout the war. It was developed to fit a tactical concept called the "universal machine gun," wherein the same weapon would be used in both the light and medium machine gun roles: what is today known as a general-purpose machine gun.

A variation of the gun, the MG34 Panzerlauf, was commonly used as secondary armament on German tanks, since the MG42's barrel change system could not easily be operated when it was mounted. This version lacked a stock, featured an armored barrel shroud and could be fitted with a solenoid for remote firing. Tanks carried a kit to allow the Panzerlauf variant to be converted for ground use, including a stock and bipod.

The MG34 could use several different feeding variations: for use as a medium machine gun, it was issued with loose 250 round metal belts with disintegrating links (which could be linked together as desired). When employed as a light machine gun it was instead used with a drum called the Gurttrommel 34 which mounted to the left side of the weapon and contained a 50-round belt. It could also use 75 round saddle drum magazines called Patronentrommel 34. To use the latter, the standard feed cover had to be replaced with a magazine holder. This feeding variant was mainly used early in the war and often when the MG34 was utilized as AA gun or mounted on a tripod. Later in the war those were not supplied anymore as they were very complicated to reload and even needed a tool for this, and the ability to use this magazine was eliminated entirely on the MG42.

Capacity: 50 round belt drum, 75 round twin drum (with replacement receiver cover), belt (typically issued as 50 or 250 round)