The Heckler & Koch G36 and variants can be seen in the following films, television series, video games, and anime used by the following actors:

The original G36 was adopted by the Bundeswehr in 1996 and remains their standard service rifle, though it is currently slated for replacement with the System Sturmgewehr Bundeswehr project aiming to complete candidate evaluation by November 2018 with a contract to be awarded in May 2019. This is a result of issues noticed in Iraq and Afghanistan where heat would result in severe performance degradation to the point of the rifle shooting 40-inch groups at 110 yards after running through two magazines.

The G36V, formerly known as the G36E, is the export version of the G36, and differs in that its carry handle lacks the dual optics found on the original G36 (although the dual-sight carry handle is available as an aftermarket accessory and can be fitted to a G36V). This version also has a different bayonet mount.

Heckler & Koch G36KV - 5.56x45mm. This is one of the screen-used weapons for the series 24: Live Another Day. The rifle is fitted with an EOTech XPS3 holographic sight, EOTech magnifier and custom suppressor. Special thanks to Cohort Film Services.

The G36K is the shortened carbine version of the original G36, introduced in 1997. As with the G36, it is available in an export version known as the G36KV (formerly G36KE), which does not come with the dual-sighted carry handle from the factory. 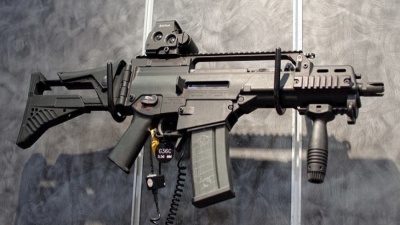 The G36C is the most compact member of the G36 family; it was introduced in 2001, and differs in that it comes with a shorter 9" barrel (compared to 18.9" on the original G36 and 12.5" on the G36K). The G36C also has a rail-top carry handle that lacks the optical sight(s) of the earlier G36 models, though G36/G36K carry handles will fit on the C model (and likewise, G36C carry handles can be fitted to the larger variants).

The MG36 was a light support weapon variant produced in small numbers for trials with the Bundeswehr, fitted with a bipod handguard, 100-round C-Mag double-drum, and a heavyweight barrel for sustained fire. The trials led the Bundeswehr to conclude that the heavy barrel did not offer a substantial enough increase in performance to justify adoption and in 1995 rejected the MG36 in favour of using a regular G36 with bipod handguard and C-Mag as a squad-level support weapon. Only a few hundred MG36s were ever made.

The MG36 is externally identical to a normal G36 with a bipod handguard; the different heavyweight barrel is not visible from the outside.

Video games would often depict a hybrid of the MG36 with G36C rails and designate them MG36. While this is not impossible on paper, realistically, due to the overwhelming rarity of the weapon, and that the weapon's rejection occurred in the same year as MIL-STD-1913 was standardised, it would be more or less impossible for an MG36 to have ever been fitted with a C-type rail carrying handle. Because of this, IMFDB currently only identifies weapons in the original MG36 configuration as MG36 (the only possible variation would be the sights, which may be export or original sights, as an export MG36E variant did exist). The video game depictions would instead be better described as a G36 in a light support weapon configuration.

Factory Heckler & Koch SL8-1 - 5.56x45mm. This is the first of the US import variants, and thus has the longer proprietary magazine dictated by its single stack magazine well.

Heckler & Koch SL8-1 Tactical Match Rifle - 5.56x45mm. This was the first aftermarket conversion of the SL8-1 rifle in the late 1990s with a custom "re-black" of the synthetic stock, custom cut for the ventilation holes in the forearm.

Heckler & Koch SL8-1 Tactical Sniper Rifle, Aftermarket "re-black" of the grey synthetic body of the SL8 and upgraded with G36 high capacity magazine well and G36 bipod - 5.56x45mm. However, most snipers use the 10 round magazines when they fire from the prone position.

Heckler & Koch SL8-4 - 5.56x45mm. This variant is not imported into the US due to its double stack magazine well, which allows it to use flush fitting 10 round magazines.

Heckler & Koch SL8-5 - 5.56x45mm. This variant is not imported into the US due to its double stack magazine well, which allows it to use flush fitting 10 round magazines.

Heckler & Koch SL8-6 Commercial rifle - 5.56x45mm. This is the newest version of the SL8 imported into the US. Now the rifles come in black, straight from the H&K Factory and have a semi-raised rail handle (a 'compromise rail' that takes elements of the SL8 and the G36C/G36K Scope mounting systems). Early models are marked "SL8-1" due to using the same moulds, later models are simply marked "SL8".

The Heckler & Koch SL8 rifle was the company's attempt at selling a commercial 'sportsman' rifle based on the military G36 design. They removed the 'offending' assault rifle type features to enable them to sell within Europe and the United States. What many see as an 'emasculated' G36 rifle, was the form of the weapon that was approved for import by the BATFE in the United States.

There are two groups of SL8 variants: European and Canadian weapons (SL8, SL8-4 and SL8-5) which feature a standard double stack magazine well, and the American import versions (SL8-1 and SL8-6) which have a single stack magazine well requiring proprietary 10 round magazines.

See here for a brief guide to identifying these different variants. Heckler & Koch has another variant of the SL8 rifle that has a shorter threaded barrel, designed for a Suppressor, called the SL9. Airsoft companies and Video Games routinely mis-identify or misname these rifles.

The Heckler & Koch SL9SD is semi-automatic rifle, gas-operated bolt with rotary bolt head using.300 Whisper. The cartridge will fit and feed from all standard 5.56×45mm NATO magazines. Also, under the forend of the HK SL9SD, there are rails for installing bipods.

The HK243 is another version of the military G36 designed for the civilian market. The HK243 is a semi-automatic rifle that fires the .223 Remington cartridge and can be modified to accept STANAG magazines. It has a unique boot that is design to thwart easy conversion to fully automatic, as per German law. HK243 is the European designation of the rifle; an American export version, dubbed the HK293, has been planned but not released.