The following weapons were used in the film The Hunger Games: Mockingjay - Part 2:

Some Peacekeepers are seen with FN P90s. 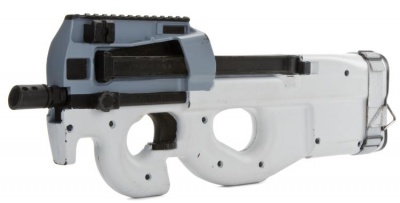 The Peacekeeper at left carries a P90.

Peacekeepers can be seen with their standard-issue FN F2000 Tactical assault rifles with white furniture. At one point, Gale (Liam Hemsworth) takes one off a peacekeeper.

Several Peacekeeper vehicles are armed with a Browning M2HB machinegun. What appear to be modified M2's are used remotely as booby traps.