Jurassic Park III is a 2001 sci-fi adventure film directed by Joe Johnston and the second sequel in the Jurassic Park franchise. Eight years after the 1993 Isla Nublar Incident, Dr. Alan Grant (Sam Neill) continues his research on the Velociraptor, however he faces constant pressure by the ensuing infamy of the incident. He is asked by Paul Kirby (William H. Macy) to be a tour guide for him and his wife Amanda (Téa Leoni) to Isla Sorna, though there is more to the Kirby's and their journey than it seems. However, when their plane crashes due to an incident involving a Spinosaurus, the survivors must find a way off the island. The film co-stars Alessandro Nivola, Trevor Morgan, Michael Jeter, John Diehl, Bruce A. Young, and Laura Dern who reprises her role as Ellie Degler née Sattler. The Jurassic film franchise would return 14 years later with 2015's Jurassic World.

The following weapons were used in the film Jurassic Park III:

A Heckler & Koch USP is seen in Udesky's (Michael Jeter) vest holster. Udesky is then seen in the background when the T. rex encounters the Spinosaurus trying to draw out his USP, but inadvertently drops it. 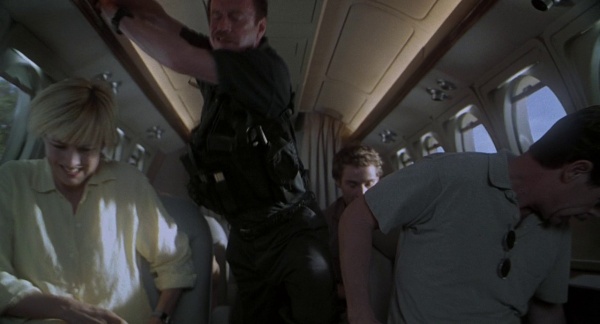 At the film's beginning, a mercenary named Cooper (John Diehl) demonstrates a heavy caliber sniper rifle that is described (in the closed captioning) as an "Iron Horn 20 millimeter". In reality, the rifle appears to be a Barrett M82A2 .50 caliber sniper rifle, the bullpup variant of the Barrett M82 series. When first testing it at an aircraft boneyard, Nash says that this sniper rifle fires 20mm high-explosive incendiary rounds, is gas-operated and uses a rotating bolt. The rifle is fitted with an AN/PAS-13 Thermal Weapon Sight (TWS), Harris bipod and multi-ported muzzle brake. The rifle can be heard being fired off-screen several times during the first encounter with the Spinosaurus, but none of the rounds seem to hit their mark as the dinosaur appears unharmed. 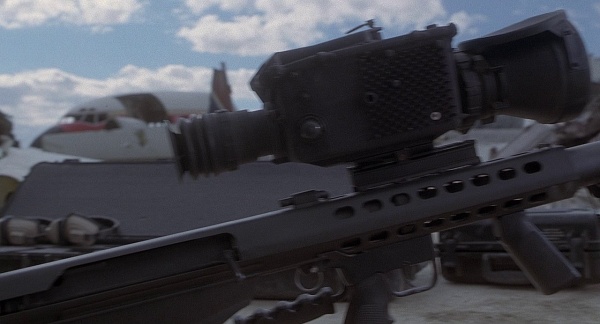 The camera pans across the "Iron Horn" rifle (in reality a Barrett M82A2). Note the AN/PAS-13 TWS attached. 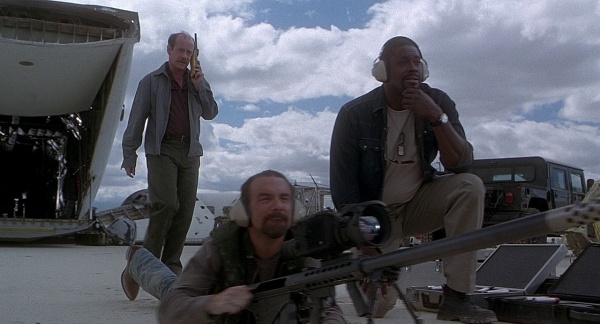 Cooper (John Diehl) racks the bolt on the "Iron Horn 20 millimeter" (as the closed captioning indicates). 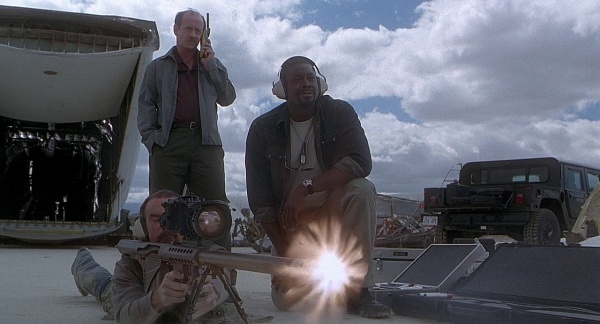 Cooper fires the sniper rifle. While dirt is seen displacing when fired, it appears that the muzzle flash (as well as the displaced dirt) is a CGI enhancement, given that the bolt does not cycle. 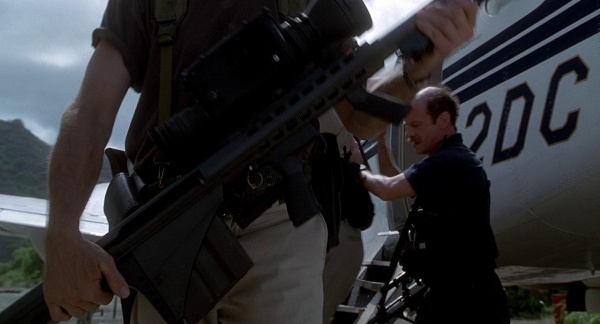 Cooper readies the the rifle when they first land on Isla Sorna. 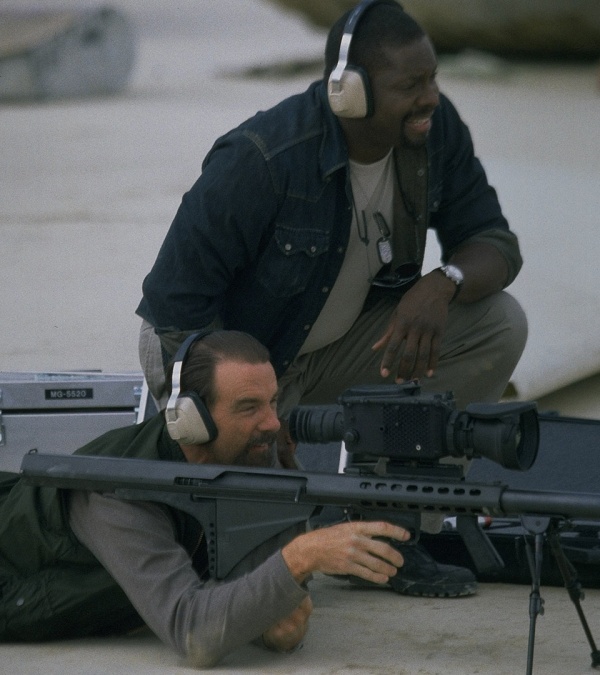 The pilot and second mercenary M.B. Nash (Bruce A. Young) is seen armed with an Heckler & Koch SL8-1 rifle fitted with a single stack 10 round magazine and an M68 Aimpoint red dot scope. 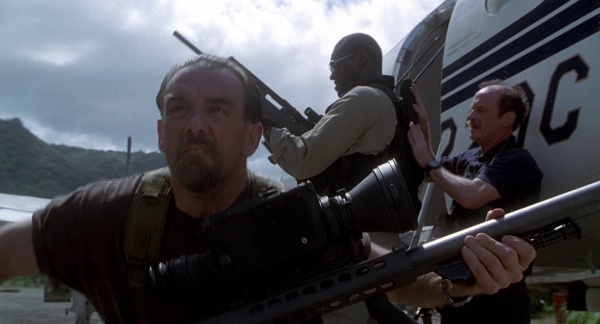 Nash (Bruce A. Young) loads up his Heckler & Koch SL8-1 to set up the perimeter. 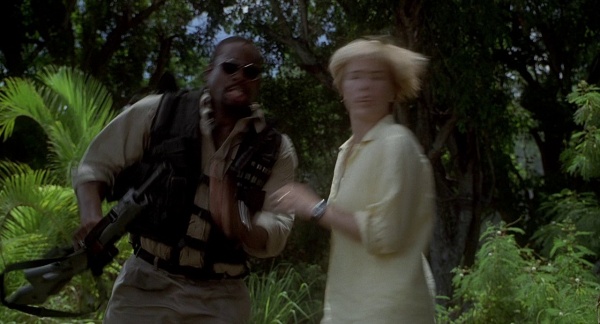 Nash runs back to the plane with his SL8-1 in hand.

Co-pilot and mercenary Udesky (Michael Jeter) is seen armed with a Steyr AUG A1 assault rifle fitted with a 42-round magazine. It is rendered useless from the plane crash. 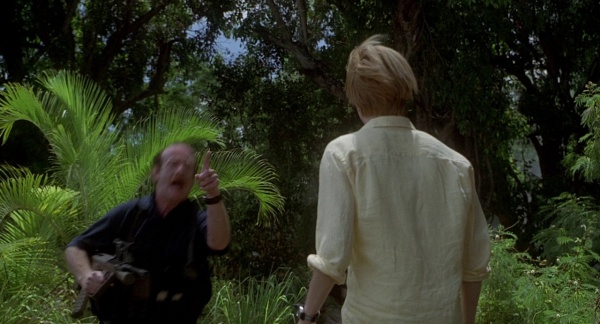 Udesky runs for the plane with his AUG in hand. Note the 42-round magazine and folded up foregrip. In the next shot, there is a continuity error, as the grip is folded down.

The US Marines who land on the beach of Isla Sorna are armed with M16A2 Rifles. Many of them appear to have A1-style (teardrop) forward assist buttons (but in the late 1980s and 1990s these were common field repair items on A2s). Most are likely rubber props. Some of the extras exhibit proper gun safety training by keeping their fingers off the triggers, while others do not. Some of the Marines were played by real Marines based at MCB Kaneohe Bay in Hawaii. 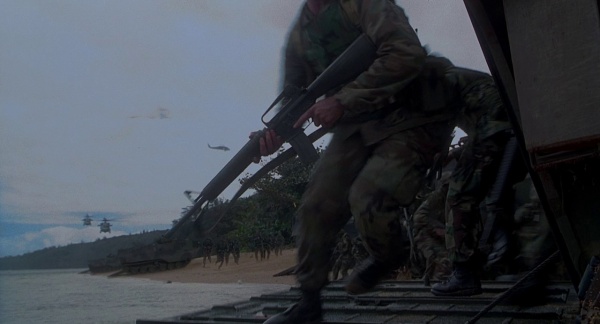 A US Marine dismounts from an APC armed with an M16A2; note how he keeps his finger off the trigger. 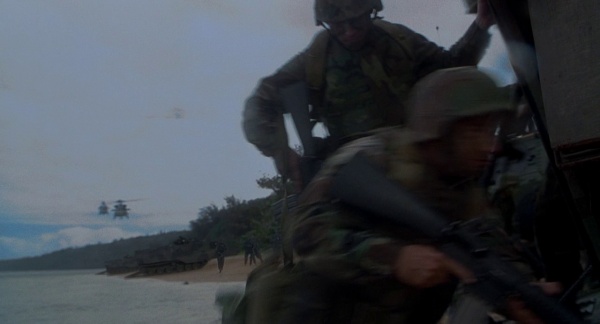 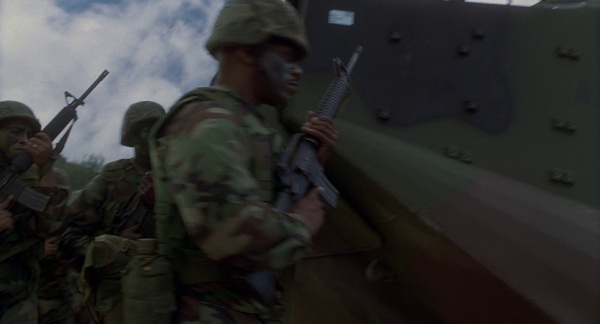 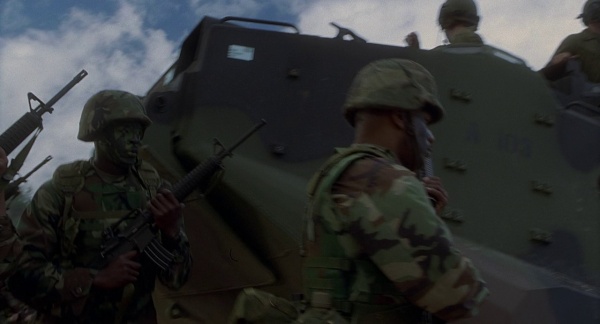 A US Marine armed with an M16A2; he keeps his finger on the trigger which in real life goes against military training/proper firearms handling. Also note the M16A1 (teardrop style) forward assist button. Of note, it also appears the Marines are wearing the Interceptor Body Armor, which would make this one of the very first appearances of the IBA in film (the movie having been filmed in late 2000 using real Marines, which might explain why).

Nash is briefly seen with a pistol gripped Maverick Model 88 when he rushes to start the plane. 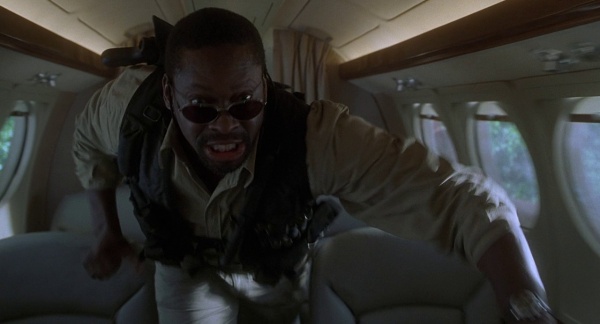 Nash rushes to the cockpit to start the plane with a Maverick Model 88 on his back. 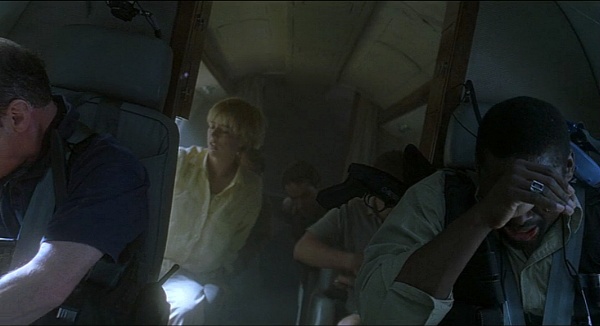 Nash with the shotgun slung. Note the lack of the switch safety at the top rear of the receiver in this shot, indicating it is a Maverick and not a Mossberg 500 Cruiser.

The Amphibious Assault Vehicles used by the Marines are armed with turret-mounted Mk 19 grenade launchers. 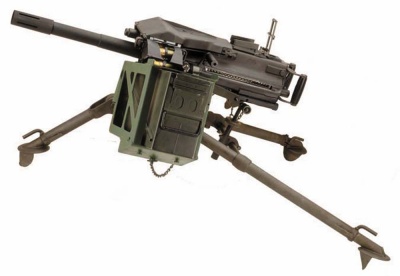 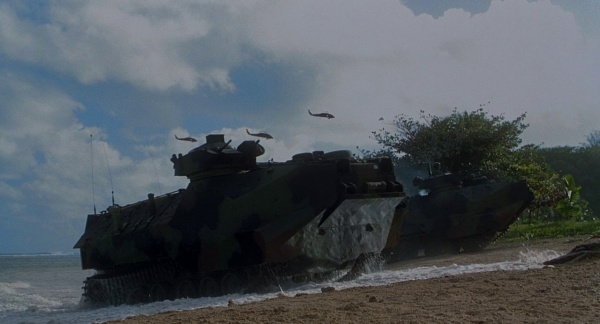 A Mk 19 Grenade Launcher is mounted on the right on top of the AAVs.

A Browning M2HB is mounted on the left on top of the AAVs.

Dr. Alan Grant (Sam Neill) finds an Olin 25mm flare gun and uses it to ignite the boat fuel around the Spinosaurus in the water, ending its attack on the group. It should be noted that in real life, submersion under water would render the flare too damp to fire. The gun used is based an older model that was commercially available under the Winchester "Olin" brand before it became Orion. These flare pistols had a black satin finish and bright orange grips, which are the inverse colours of the current Orion models with white and blue colours. 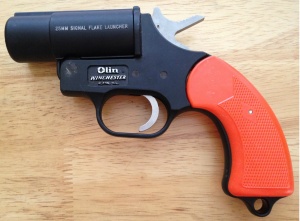 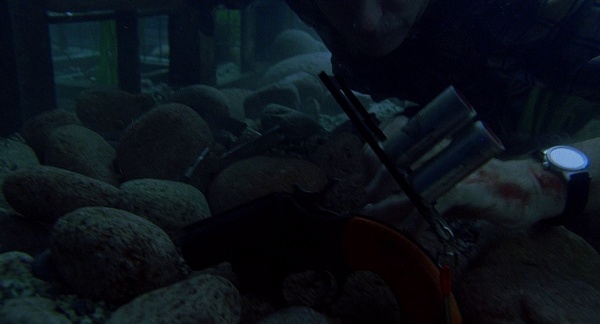 An Olin flare gun falls out of the tool box for Alan to find. Note the half loaded flare stripper clip as well. 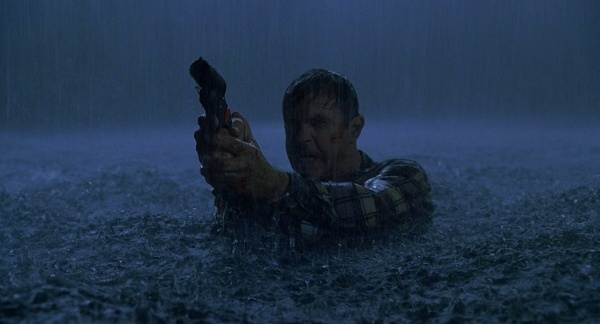 Grant fires the Olin flare gun at the Spinosaurus, igniting the boat fuel around it.
Retrieved from "https://www.imfdb.org/index.php?title=Jurassic_Park_III&oldid=1502096"
Categories: