The Heckler & Koch HK series of machine guns appears in the following films, video games, and anime used by the following actors:

A belt-fed general-purpose machine gun based on the Heckler & Koch G3 rifle.

Magazine-feed-only version of the HK21. A variant of the HK11 has been adopted in limited numbers by the German military as the G8. 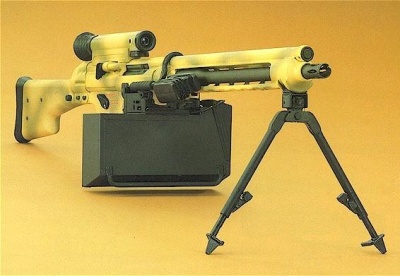 The GR9 is a belt-fed light machine gun using the 5.56x45mm cartridge, and based on the HK23. It is capable of semi-automatic (single shots) as well as fully-automatic fire. Its most distinctive characteristics are its finishes, permanently mounted scope, and the lack of iron sights. 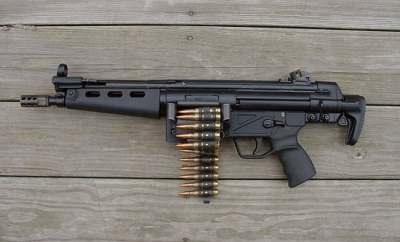 An unofficial short-barreled version of the HK21, made by FJ Vollmer & Company, Inc. Charging system has been changed. Ammo is fed via the M13 link designed for the M60 machine gun. Has a modified version of the MP5 "tropical" wide handguard. Only 30 HK51B's were ever made, 2 of which had quick change barrel systems.