The following weapons were used in the film Paragraph 78 (Paragraf 78):

Two agents can be seen armed with Glock 17 pistols, but never fire them.

The pistol's shape can be seen here.

Fox (Anastasiya Slanevskaya) carries a TSD Tactical M9X Tac pistol, which is an airsoft replica of the Beretta 92FS with a frame rail and compensator. At the film's climax, her pistol appears in the hands of Doctor (Yusup Bakhshiev) and Goodwin (Gosha Kutsenko). 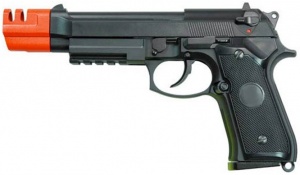 Fox (Anastasiya Slanevskaya) with the pistol.

Good view of the pistol's shape.

Lyuba (Stanislav Duzhnikov) with the shotgun.

Skiff (Vladimir Vdovichenkov) and Spam (Anatoliy Belyy) use AKMS rifles as their duty firearm. Their rifles are missing the AKM slanted compensator.

Good view of the rifle.

Main characters with the rifles.

Lyuba (Stanislav Duzhnikov) with the rifle on his back. Note the side folding stock and 5.45x39mm magazine.

Goodwin (Gosha Kutsenko) with the rifle on his back

Pay (Aziz Beyshenaliev) uses an M4 with a railed handguard as his main firearm.

Rifle in the background.

Pay (Aziz Beyshenaliev) during an ambush.

Goodwin (Gosha Kutsenko) and Festival (Grigoriy Siyatvinda) use the Heckler & Koch G36C as their duty rifle.

Festival (Grigoriy Siyatvinda) during an ambush.

Good view of the rifle.

Lyuba (Stanislav Duzhnikov) with the minigun.

Lyuba (Stanislav Duzhnikov) fires. The minigun is shown as being fired with no visible recoil.