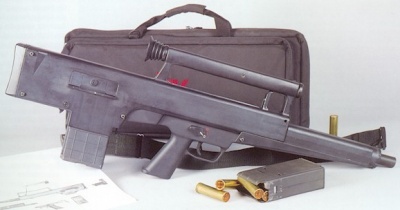 The Heckler & Koch CAWS (Close Assault Weapons System) is a bullpup magazine-fed combat shotgun. It was developed by Heckler & Koch and Winchester-Olin during the 1980s as part of the CAWS program, an attempt to salvage the failed SPIW program, and competed with the AAI CAWS. The project goal was an infantry arm designed for city combat at ranges of 100 yards or less, with the obvious stumbling block of what the soldier was supposed to do if his enemy was more than 100 yards away proving to be the project's downfall.

The HK CAWS was the only entry to really get anywhere, and was a fully ambidextrous select-fire shotgun using proprietary brass-cased 12-gauge rounds to avoid the issue of melted plastic fouling the action as might potentially happen with a full-automatic shotgun firing conventional plastic cased shells. It never proceeded beyond the prototype phase, and was not pursued further following the cancellation of the CAWS project. Work done on CAWS was, however, used in the design of the equally ill-fated bullpup 20x28mm grenade launcher for the XM29 Objective Individual Combat Weapon and ultimately led to the XM25.

The H&K CAWS can be seen in the following: