The Heckler & Koch VP70 is a German semi-automatic/burst fire pistol. The VP stands for Volkspistole ("People's Pistol", a designation that would similarly be used for the later Heckler & Koch VP9) and the 70 refers to its year of introduction, 1970. The VP70 has the distinction of being the world's first polymer-framed production handgun, beating out the much more well-known Glock pistol series by 12 years. The military version is able to use a detachable stock that acts as a holster when not in use, similar to the Mauser C96. Attaching this stock also allows the shooter to operate a selector switch which turns the pistol into a machine pistol firing three round bursts, with a cyclic fire rate of 2200 rounds per minute. The VP70 has extra deep rifling that allows gas to escape out the muzzle, reducing the velocity of ammo by over 10%. This loss in power makes the VP70 able to use 9x19 in a straight blowback action without making the slide excessively heavy. The VP70 saw limited use among a few police and military forces and was discontinued in 1989. Complaints were often leveled at its poor ergonomics and heavy double-action only trigger.

It was produced in two models, the VP70M (Militär, military) which was select-fire capable and the VP70Z (Zivil, civilian) which is semi-automatic only. Other than lacking the facility to take the stock, the civilian version's only functional difference is the inclusion of a cross-bolt safety at the base of the trigger guard; the military one instead relies on its double-action-only operation and resultant heavy trigger pull.

The Heckler & Koch VP70 and variants can be seen in the following films, television series, video games, and anime used by the following actors: 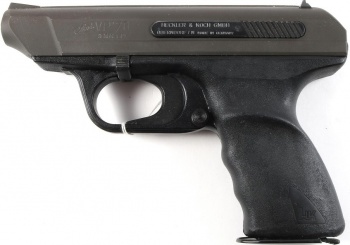 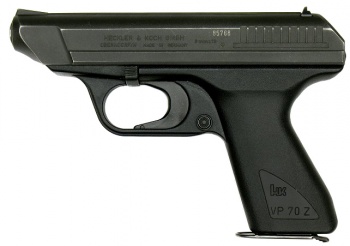