Gangster Ka is a 2015 Czech film directed by Jan Pachl based on the novel Padrino Krejčíř by Jaroslav Kmenta. The film is inspired by the true story of Radovan Krejčíř. Mobster Radim Kraviec, alias "Ka" (Hynek Cermák), has made his fortune through a billions-krone tax fraud scheme trading petroleum products and later seeks to dominate the state company Cepro, which is the strategic oil reserves of the Czech Republic. He did not turn to violence, until the abduction and killing of his father by a competing gang. This event turned him into a murderous monster. After a mysterious escape from his villa in the midst of a raid by the special police forces (URNA), he settles first in the Seychelles and later in South Africa, where he blackmails politicians and co-finances election campaigns.

The following weapons were used in the film Gangster Ka:

Radim Kraviec has a Heckler & Koch P30 hidden in his vault.

Kraviec put his gun to the head of hitman Sivak (Alexej Pysko).

Kraviec in a hotel room attends to the wounded Dardan (Predrag Bjelac) while holding his gun in his hand.

Dardan Circel (Predrag Bjelac) draws a Heckler & Koch P30 on the clerk in the bank.

The Heckler & Koch P30 is used as a sidearm by Detective Lanský (Filip Capka) when he arrests Dardan.

A thief aims at the driver of the car carrying the fake money with a Heckler & Koch P30.

Radim pulls a gun on Dardan Cirkel, which he had in his car.

Dardan uses a suppressed pistol to "dispose" of an inconvenient witness.

One thug (left) during the robbery of a car holds a Beretta 92FS Centurion.

A Beretta 92FS Centurion fitted with a silencer is also used by Sivak in his "work".

Dardan aims his pistol at the recently exposed police spies.

Hitman Sivák (Alexej Pysko) uses a Glock 17 while disguised as a police officer.

A Colt M1911A1 in the detective's hand before a police action.

Hakl (middle) aims his Colt at Dardan Cirkel (Predrag Bjelac) during his arrest.

Radim Kraviec pulls a Colt M1911A1 on a police spy.

Then, Kraviec puts the gun to the head of another police informant.

Kraviec, under the influence of anger, turns the gun on Dardan Circel.

A Sa vz. 61 Skorpion submachine gun is also seen in the movie.

The hired assassin fires a burst at Kraviec from a moving car.

An Ekol ASI Uzi submachine gun is fired at Kraviec by one of the Pakistani thugs (left). 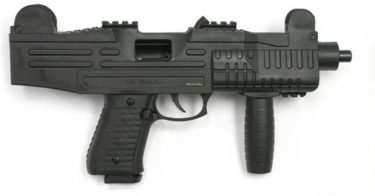 After the raid on Kraviec's home, an officer holds an MP5 to the left.

An URNA officer with a Heckler & Koch MP5A2 guards the front door of a bathroom.

A Heckler & Koch MP5SD2 is seen held by an URNA member in Kraviec's house.

An UNRA officer guards Kraviec with his Heckler & Koch MP5SD2.

Close up of the butt.

An UNRA member (left) is armed with a Heckler & Koch G36C.

One of the URNA members who force their way into Kraviec's house carries a Sa vz. 58.

An URNA officer armed with a Sa vz. 58 stands in the background in the middle.

The barrel of this weapon aimed at Kraviec.

Dardan Cirkel (Predrag Bjelac) and a gangster use a Fabarm SDASS shotgun.

Close up of the shotgun in the hands of one of the gangsters.

Dardan pulls a shotgun during an attack on the car transporting money.

Some of URNA members carry a Winchester 1300 shotgun.