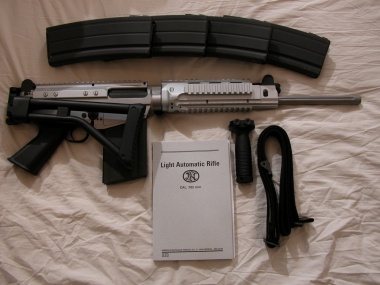 The IMBEL IA2 weapon system is an updated version of both the 5.56 MD-97 and 7.62 NATO M964 A1 MD-1 ParaFAL with new polymer furniture. Development primarily focused on the 5.56 version, though a 7.62 version was also developed in parallel. The carbine versions of the weapon have been adopted by the Brazilian Armed Forces as their new standard rifle.