Danger Close: The Battle of Long Tan is a 2019 war movie which dramatises the actions of D Company, 6th Battalion of the Royal Australian Regiment on 18th August, 1966 during the Vietnam War. After resisting a Vietcong artillery attack on the 1st Australian Task Force base in Nui Dat, Delta Company of the 6th Battalion, Royal Australian Regiment lead by Major Harry Smith is sent out to scout the nearby rubber plantation at Long Tan in order to root out the source of the mortar attack. What was supposed to be a routine patrol quickly devolves into a desperate fight for survival for the scattered Australians as more than a thousand Vietcong fighters descend on their position.

Not to be confused with the similarly named docu-drama, The Battle of Long Tan, which chronicles the same historical battle.

The following weapons were used in the film Danger Close: The Battle of Long Tan:

Major Harry Smith (Travis Fimmel) carries an M1911A1 as his sidearm during the action at Long Tan.

During a close-quarters engagement, Major Smith draws his sidearm.

Smith readies his M1911A1 for another enemy rush.

The AK-47 is one of the main rifles carried by Vietcong forces throughout the film. Sgt. Bob Buick (Luke Bracey) picks up an abandoned AK-47 and is seen using it later.

A Vietcong soldier falls with AK-47 in hand. Note the missing cleaning rod.

Sgt. Bob Buick (Luke Bracey) with a captured AK-47 slung over his bag.

Sgt. Bob standing to with his captured AK-47. The fire selector is set to semi.

Several Vietcong soldiers proning with their AK-47s. This appears to be a reversed shot as the charging handle/ejection ports are on the left side instead of the right.

A Vietcong trooper rushing out of the brush wildly firing his AK-47.

The L1A1 is the main weapon of the Australian Defence Force soldiers, often referred to as the "SLR" ("Self-Loading-Rifle"). These rifles appear to be early-British L1A1s due to the wooden furniture as well as long vent holes on the handguard, as opposed to genuine Aussie FALs that have more-rounded handguards with smaller round vent holes.

An ADF soldier prones with his L1A1 when 11 Platoon comes under fire.

"One round left!" An ADF soldier aims his L1A1 without a loaded mag, but still a round left in the chamber.

An reserve soldier stands to with his SLR when the 1st Australian Task Force base at Nui Dat is put on full alert.

2nd Lt Geoff Kendall (Travis Jeffrey) desperately holds his empty SLR like a club as they brace for another Vietcong wave.

Armoured infantry disembark from M113 APCs with their L1A1s.

The M16 appears being carried by many of the Australian troops. In one scene, a Vietcong soldier is seen firing a captured M16.

Pte. Paul "Largie" Large (Daniel Webber) looks on in horror after he negligently discharges his M16 rifle during the mortar attack on the 1st ATF base.

Maj. Smith (Travis Fimmel) inspects and loads Pte. Large's M16 after dressing him down for the latter's ND incident. During this scene, Pte. Large states his preference for carrying an M16 over an L1A1 due to the former's lower weight.

A trio of Vietcong soldiers take firing positions around 11 Platoon, the left one using a (presumably) captured M16.

Sgt. Bob Buick (Luke Bracey) with his issued M16 as he is on the radio.

A Mosin Nagant M91/30 Sniper Rifle with an attached PU 3.5x scope is used by a Vietcong sniper to ambush 11 Platoon.

A Vietcong sniper sets his Mosin rifle aside in a hut's attic.

The rifle barrel pokes out from the straw hut.

The sniper takes aim through the PU scope.

Vietcong troops in the film carry a mix of SKS and Norinco Type 56 rifles with underfolding bayonets.

A Vietcong patrol wanders around the Long Tan plantation, some with slung SKS rifles. The lead scout seemingly has an original Russian SKS with a blade bayonet

A trio of Vietcong soldiers take firing positions around 11 Platoon, the one in front holding a SKS.

A Vietcong soldier fires his SKS from a prone position. This one has a "pig sticker" spike bayonet, making it a Chinese Type 56 carbine.

Pte. Large encounters a pair of female auxiliaries with SKS rifles slung on their backs. Various militias participated in the Battle for Long Tan in casualty-clearing and resupply roles for the Vietcong.

A Vietcong soldier fires his SKS at Australian helicopters.

Several Vietcong troops are seen with StG-44 rifles. While this may seem like a curious choice, in fact, many old Wehrmacht firearms such as the MP40, MG34 and Karabiner 98k had been seized by Soviet forces during WWII and later redistributed to their communist allies in the early years of the Cold War, including North Vietnam during the Indochina conflicts.

The Vietcong soldier on the far left with his StG-44 as the rest of his platoon retreats.

A Vietcong soldier carries his StG-44 into battle.

The soldier fires his StG-44. 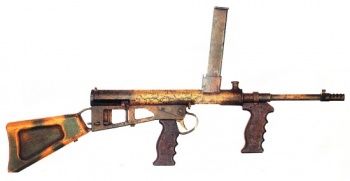 A soldier sets his Owen Gun down during a lull in the fighting.

Another APC commander fires his M2. In the actual battle, many of the M113s lacked gun shields due to logistical shortages and the APCs themselves being in various states of disrepair, therefore risking the gunners to direct enemy fire.

A Goryunov SG-43 on a Sokolov mount is used by a Vietcong heavy machine gun team.

A Vietcong gunner fires the SG-43 while his assistant helps to feed the belt.

Shot of the gunner through the shield's viewport.

The Vietcong MG team relocates their SG-43 toward the Australian's field HQ.

A RAAF Huey with a mounted M60 machine gun on the side doors.

A close-up of the Huey's door-mounted M60.

Pte. Eglinton hip-fires his M60 at the sniper's hut.

The door-gunner of Albatross-1 fires his mounted M60.

2WO Jack Kirby (Alexander England) fires his M60 in a slow-motion sequence.

Several red and yellow versions of the M18 smoke grenade are used by ADF troops during their engagement at Long Tan. 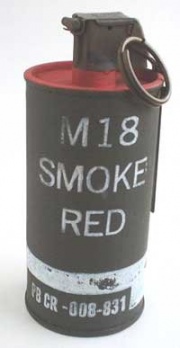 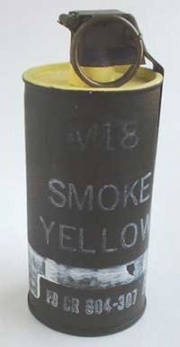 A thrown (and apparently faulty) M18 smoke grenade fizzles out and eventually fails to produce any red smoke. 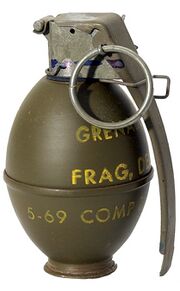 A sack of Type 67 stick grenades are seen lying abandoned in a hut.

A satchel of Type 67 stick grenades lie at the bottom of the hut.

A L5 howitzer ready to fire. Note the lack of gun shield.

A L5 firing in slow-mo, giving us a detailed look at its massive muzzle blast.

Vietcong soldiers are seen using a Granatwerfer 34 Mortar during their opening attack on the Australian base at Nui Dat. The Australian artillery coordinators refer to them as "82s". 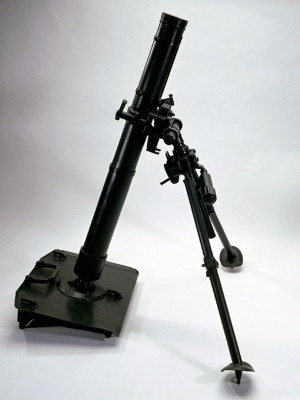 A Vietcong mortar team cower around their mortar piece as New Zealand counter-battery fire rages around them.

The mangled, bloodied mortar piece is seen when the advance party investigates the site.

A Vietcong soldier uses a RPG-2 during the battle for the plantation.

A Vietcong soldier readies his RPG-2.

He is later killed mid-reload, dropping the RPG-2 on his own body.
Retrieved from "http://www.imfdb.org/index.php?title=Danger_Close:_The_Battle_of_Long_Tan&oldid=1372245"
Categories: