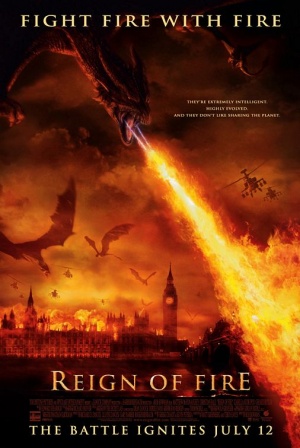 The following weapons were used in the film Reign of Fire:

Quinn Abercromby (Christian Bale) keeps an Ulriks Mauser Tyrannosaurus Rex or T-Rex rifle in the massive .577 Nitro cartridge and is seen with it several times in the film, most notably when he faces the Bull Dragon and fires at it. Like the .600 Nitro double rifle in The Lost World: Jurassic Park, it is an expensive and rare gun that is custom-crafted by expert gunsmiths. The gun is said to have such vicious recoil and overwhelming firepower that even hunters in Africa only keep it as a back-up gun in case of a charging animal. Even with such immense firepower, the rifle manages to do little more than make the dragon mad. When looking closely at the front sight, it appears they used more than one rifle in the film as the front sight changes in some shots.

Quinn's rifle resting up against the table.

Quinn with his T-Rex rifle in hand. Noted hooded sight.

Quinn readies his rifle as a dragon flies over.

Quinn loads his rifle with the massive .577 Nitro rounds which the gun can only hold two of!

Quinn hides from the dragons in London with his T-Rex rifle in hand.

Quinn prepares to run out and face the Male Bull dragon with his .577 rifle.

Quinn fires the rifle at the Bull dragon, which does nothing but make it mad. After two shots, he carelessly throws the priceless rifle to the ground.

The British variant of the FN FAL rifle, the L1A1 SLR is seen in the hands of several of the castle refugees when the Americans first arrive.

A British refugee armed with an L1A1 SLR.

Creedy (Gerard Butler) with an L1A1.

One of the British refugees is seen armed with an Norinco Type 56-1 rifle.

A British refugee aims his Norinco Type 56-1 when the Americans arrive.

One of the refugees with the Norinco Type 56-1.

One of the refugees is handed a Lee-Enfield No. 1 Mk III* rifle when the Americans arrive and is later seen with it.

One of the Refugees hands out a Lee-Enfield No. 1 Mk III* rifle.

One of the refugees armed with the Lee-Enfield No. 1 Mk III* rifle.

A refugee is seen in the background with a Steyr-Solothurn S1-100/MP34 submachine gun.

One of the refugees is handed an M1 Thompson and she is later seen loading it while riding on the American tank.

A refugee pulls an M1 Thompson out of the weapons crate.

A refugee loads up her M1 Thompson.

One of the refugees is seen armed with an MP40 submachine gun.

A refugee hands out an MP40.

One of the refugees armed with an MP40.

One of the refugees hands out a Sten Mk II submachine gun.

A Refugee hands out a Sten Mk II in one hand, and an M1 Thompson in the other.

Denton Van Zan (Matthew McConaughey) uses a Mossberg 500 Cruiser with a super-short barrel and a Tacstar fore-grip on the pump as his main weapon throughout the film, keeping it slung at his hip like an over-sized sidearm.

Van Zan awaits a dragon attack with his shorty Mossberg 500 at the ready. Note the Tacstar pistol grip.

Van Zan fires his shorty Mossberg 500 at the dragon.

Van Zan dives backwards from the dragon's fire, firing his Shorty 500 which appears like a post-production edit. If you look closely the pistol grip has broken off in his left hand, it is magically reattached in the next shot.

When Van Zan enters the construction shaft in London, the shot appears to be reversed based on how the ejection port is on the other side of the Shorty 500.

A clear shot of Van Zan's Shorty 500 is finally shown when the three search the construction shaft.

A number of Americans are seen armed with the Franchi SPAS-12 shotgun during the film.

An American soldier armed with a Franchi SPAS-12.

American soldiers fire their SPAS-12s at the dragon.

One of the British refugees is armed with a Winchester Model 1897 shotgun.

A refugee prepares for a dragon attack with a Winchester 1897 shotgun in hand.

Many of the Americans can be seen armed with Ultimax 100 Mk. 2 machine guns fitted with 30 round magazines. Van Zan keeps one slung over his back along with his Shorty Mossberg 500. When facing the Bull dragon during the film's climax, Alex Jensen (Izabella Scorupco) uses one to distract it long enough for Quinn to ready his Crossbow.

An American to the right armed with an Ultimax 100 Mk. 2 machine gun.

Van Zan keeps an Ultimax 100 slung on his back.

Americans ready their Ultimax 100 machine guns for a dragon attack.

Americans fire their Ultimax 100s at the dragon.

Alex fires her Ultimax at the Bull dragon to distract it long enough for Quinn to load his Crossbow.

Americans keep Browning M2HBs mounted on the top of their tanks.

An American cocks his Browning M2HB as they approach the British refugee castle. A Saracen APC is pictured in the background.

Browning M2 (mocked up as DShK)

The machine gun mounted on Van Zan's Chieftain tank is a Browning M2 visually mocked up to resemble the DShK heavy machine gun although close inspection of the receiver and belt box, as well as some other small features reveal that it is an M2.

Quinn looks through his rifle scope at Van Zan's tank. Note how it is clearly a Browning M2 mocked up as a DShK.

Van Zan stands on his tank with the mocked up M2.

A close up of the fake DShK barrel on the Chieftain tank.

While bows aren't usually considered firearms, bows with Magnesium Phosphate C4 arrow tips are a different story. Van Zan and Quinn both use these crossbows when facing the Bull Dragon at the film's climax. Van Zan tells Quinn that the only way to kill it is to wait when it breathes fire, because only then does it expose its chest. Van Zan almost hits the Bull while standing on a tower, but it breathes fire and the arrow only manages to ignite its flame early, damaging its mouth and causing it to breathe smoke. When Quinn faces it, he loses his arrows whilst doing a Judo roll away from the dragon as it strikes. He manages to grab one of the arrows, and right before the Bull torches him, he fires it into the dragons mouth, blowing up its napalm valve and severing its head.

Van Zan readies his Crossbow while on top of the tower.

Van Zan aims down the Crossbow.

Unfortunately Van Zan's shot is halted by the dragon's breath, which instead of killing it, burns its mouth and causes it to smoke. Sadly, the dragon recovers and Van Zan does a super jump right into the Bull's mouth when it strikes.

Quinn tries to cock the Crossbow, which appears to be harder to pull back then Van Zan made it look.

Quinn waits for the opening to fire his Crossbow into the dragon's mouth.

The explosive bolt goes right into the Bull's mouth.

The bolt ignites the Bull's napalm valve and its head becomes severed in the explosion.

When killing the first dragon, Van Zan mans a large vehicle mounted Harpoon Gun and fires it just as the dragon flies over the hill, killing it with a harpoon to the chest.

A first person view of the sights shows that the gun is clearly not too dependable accuracy wise.

When searching the construction shaft in London, Van Zan uses a Flare Launcher to fire flares ahead of the tunnel. The weapon itself is a Defense Technology L8 Single Shot 37mm Launcher with an extended barrel.

Van Zan fires the Flare Launcher around a corner.
Retrieved from "http://www.imfdb.org/index.php?title=Reign_of_Fire&oldid=1486829"
Categories: