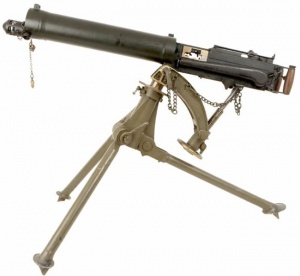 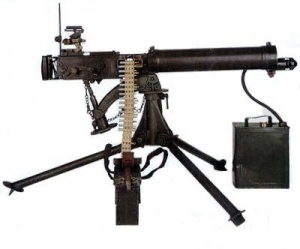 The Vickers Machine Gun, or simply Vickers Gun, is a British medium machine gun made by the Vickers company, chambered in .303 British caliber. It was a further development of the Maxim machine gun developed in 1885 by Hiram Maxim, whose patent the company had purchased in 1896, and was manufactured from 1912.

Thus was born the Vickers R.C. GUN, CLASS C, Model 1908 "Light Pattern" and after much testing and some modification, the gun was adopted as the standard "Vickers Machine Gun .303 Mark I" in the British Army on November 26, 1912. The Vickers machine gun used standard British .303 caliber ammunition and was popular with soldiers for its reliability and solid workmanship. The Vickers Gun was the standard heavy machine gun of the British Army in World War I. It became the standard weapon in the British Empire and Commonwealth for the next 55 years and remained in service virtually unchanged. The machine gun was offered for various calibers and sold worldwide. 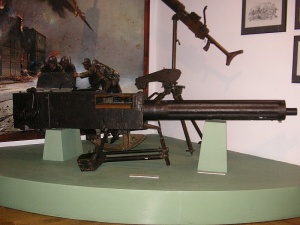 Vickers .50 machine gun - Essentially the Mk1 but chambered in .50 caliber. Mounted on Armored Vehicles and used as Navy AA until supplemented by the Besa and Oerlikon 20mm Cannon - 12.7x81mm

The Type 97 aircraft machine gun appears in the following films and video games: