Midway is a 2019 World War II film directed by Roland Emmerich that follows the events leading up to the Battle of Midway in 1942, where the US Navy attempted to prevent the ships of the Imperial Japanese Navy from taking over the strategic air station on Midway island in the Pacific. The events of this battle had previously been chronicled in the similarly-named 1976 film. The cast includes Ed Skrein, Woody Harrelson, Luke Evans, Mandy Moore, Patrick Wilson, Tadanobu Asano, Etsushi Toyokawa, Nick Jonas, and Dennis Quaid.

The following weapons were used in the film Midway:

U.S. pilots and officers can be seen with holstered Colt M1911A1 pistols.

Col. James Doolittle with his Colt in holster.

A Mauser C96 can be seen in the holster of Chinese Major (Philip Fu-Kang Wang) of the Guerrilla fighters.

Closer view of the front sight.

The Marine on the right attempting the cycle the rifle.

The two Marines on the right fire their rifles.

The Navy soldier on the left.

The Karabiner 98k is seen in the hands of Chinese Guerrilla fighters. Some of them are equipped with late war welded barrel bands.

What appears to be a water-cooled version of the Browning M2HB machine gun is seen also.

The water-cooled M2 on the left.

The Browning in the middle next to the camera tripod.

Two Type 93 Heavy Machine Guns can briefly seen onboard the Agaki and Hiryu. 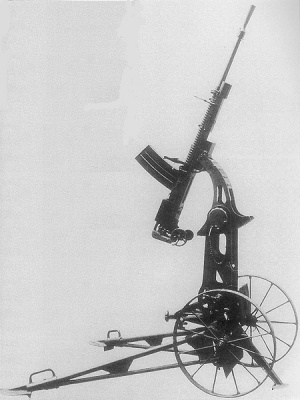 A sailor mans the Type 93 on the aircraft carrier tower.

The Browning M2 Aircraft heavy machine gun appears in the film as the primary armament of the B-25 Mitchell bombers commanded by Col. James Doolittle (Aaron Eckhart).

The Browning M2 Aircraft heavy machine gun appears in the film as the primary armament of the B-25 Mitchell bombers commanded by Col. James Doolittle (Aaron Eckhart).

First person view of James Murray's Brownings during the battle.

During the attack on Pearl Harbor, Japanese D3A "Val" dive bombers and B5N "Kate" torpedo bombers can be seen with Type 92 light machine guns, a Japanese copy of the Lewis Gun, for the tail gunners.

A cockpit view of an A6M fighter.

Japanese "Zero" fighters are also armed with Type 99 cannons mounted in the wings.

Japanese "Zero" fighters are also armed with Type 99 cannons mounted in the wings.

US sailors can be seen with a 1.1"/75 caliber gun on the USS Enterprise. 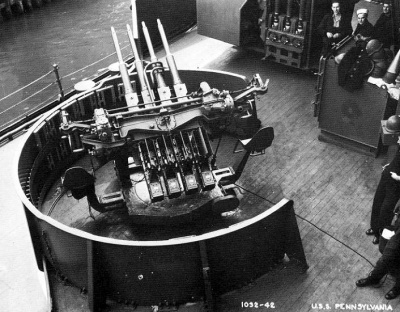 A sailor inserts a magazine into the gun.

US sailors can be seen operating the 1.1"/75 caliber gun.

Close up of the firing barrels.

US Navy ships at Pearl Harbor are also armed with Oerlikon 20mm Cannons. These are anachronistic for the period, not being adopted by the Navy until mid-1942. At the time of the Pearl Harbor attack the Navy's primary light antiaircraft gun would have been the water-cooled version of the Browning M2 heavy machine gun.

The Oerlikon 20 mm Cannon is seen on the right mounted on the Arizona.

Sailors on the Enterprise load a cannon with its drum magazine. 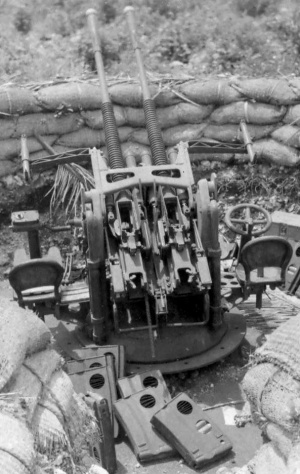 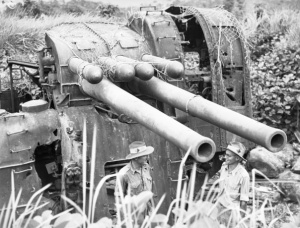