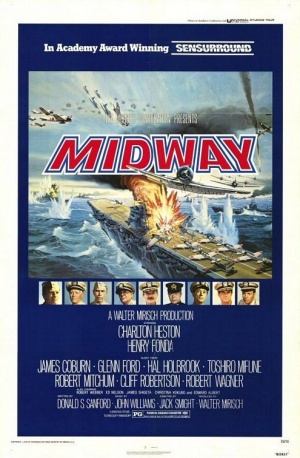 Midway is the 1976 World War II film that recounted the events of one of the most significant naval battles fought in the Pacific during the war. Telling the story from both sides, an all-star cast was assembled for the film including Charlton Heston, Henry Fonda, James Coburn, Hal Holbrook, Robert Mitchum, and Toshirô Mifune. Also notable were early performances from Erik Estrada and Tom Selleck.

The film makes use of both wartime color stock footage from 1942 newsreels and footage taken from previous World War II films including Thirty Seconds Over Tokyo, Away All Boats, Battle of Britain (including some footage of exploding German aircraft), the Japanese Toho-produced Storm Over the Pacific, and Tora! Tora! Tora!. Almost all carrier scenes, including some of Japanese carriers, show the USS Lexington (CV-16), which would later play Japanese and American carriers again in Pearl Harbor.

In a Q&A session for the movie Independence Day: Resurgence recorded in May 2016, director Roland Emmerich announced that his next project would be a a new feature film about the battle, which was released in November of 2019.

The following weapons were used in the film Midway (1976):

US Navy personnel on Midway Island including Captain Cyril Simard (Larry Pennell) and his aide (Tom Selleck) are seen carrying the M1928A1 Thompson.

On the right, Captain Cyril Simard (Larry Pennell) and his aide (Tom Selleck) are seen carrying M1928A1 Thompsons during the attack on Midway Island.

During the attack on Midway Island, US Marine Corps personnel use M1903 Springfield bolt-action rifles.

A Marine with the M1903 Springfield during the attack on Midway.

The Browning AN/M2 is mainly seen used as the flexible rear gun on US Navy Dauntless Dive Bombers.

The tailgunner fires the Browning AN/M2.

The Browning M2 Aircraft heavy machine gun is used by US Marine Corps personnel defending the island of Midway as well as the primary armament of U.S. fighter aircraft.

The water-cooled version of the Browning M2HB machine gun is seen used on the US Navy battleships and carriers during the battle.

The water-cooled M2 is seen in the background.

A sailor defends the island with the Browning M2. This is actually footage taken from the film Tora! Tora! Tora!.

Oerlikon 20mm Cannon also are seen used on US Navy ships during the battle, including the three surviving aircraft carriers Enterprise, Yorktown, and Hornet.

Oerlikon 20mm Cannon also are seen used on a US Navy aircraft carrier during the battle. This is wartime stock footage.

The Japanese A6M "Zero" fighters that engage US Navy planes are seen armed with Type 97 Aircraft machine guns. This is not the same as the Imperial Japanese Army Type 97 light machine gun.

Japanese sailors defending their carriers from the US attack are seen firing Browning M2, .50cal machine guns, mocked up to appear as Type 1 heavy machine guns.

Japanese sailors defending their carriers from the US attack are seen firing Browning M2, .50cal machine guns, mocked up to appear as Type 1 heavy machine guns.