The Remington 1858 New Army is a percussion revolver manufactured by Remington & Son and offered in .36 (Navy) or .44 (Army). It was used widely during the American Civil War from 1862 onwards. It was used primarily by Union soldiers, and widely favored over the standard issue Colt Army Model 1860 by those who could afford it, due primarily to its durability. The high numbers produced for the war and (officially) being a non-standard pattern made it common on the surplus market, with Bannerman still offering them for cheap ($1.75 in 1903, less than a new single shot .22 rifle) into the early 1900s. This ensured it saw use in the American West and beyond, both in its original percussion configuration and as a metallic cartridge conversion. While reproductions can quickly swap out cylinders for quick reloads, the handfitted nature of the originals made this of dubious plausibility. 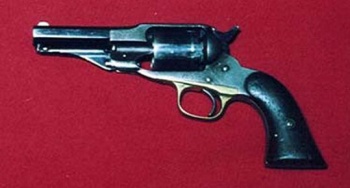