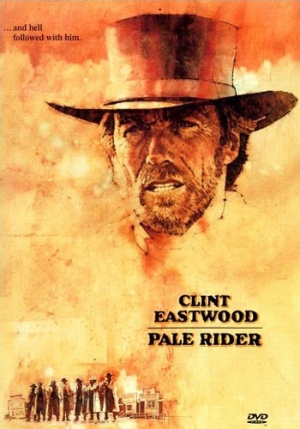 The following weapons were used in the film Pale Rider:

Preacher (Clint Eastwood) carries a Remington 1858 New Army with a cartridge conversion as his sidearm in the film, and carries several pre-loaded cylinders to use like a modern speed loader.

Preacher reloads his revolver by completely changing the cylinder.

Preacher shoots Deputy Mather (Billy Drago) with his Remington 1858 after hiding behind a water trough.

Preacher (Clint Eastwood) uses a Remington 1858 Pocket .31 caliber as a backup, carrying it stuck into his belt. The gun used has had a regular trigger with trigger-guard fitted in place of factory stud-trigger. Like all the other guns in the film, it is converted to fire metallic cartridges. 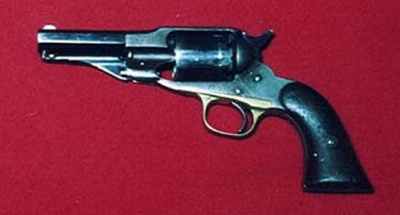 A closer shot of the Remington Pocket stuck in Preacher's belt as he draws his full sized Remington on Stockburn (John Russell).

Stockburn (John Russell) has six "deputies" who carry Colt 1860 Army revolvers that are converted to fire metallic blank cartridges. Many other characters in the film carry them as well, including Josh LaHood (Chris Penn).

Josh LaHood tries to draw his Colt 1860 Army on Preacher but is too slow.

Josh tries to pick up his Colt Army after it is shot from his hand but is shot in the hand by Preacher. Note how you can see metallic cartridges in the cylinder. 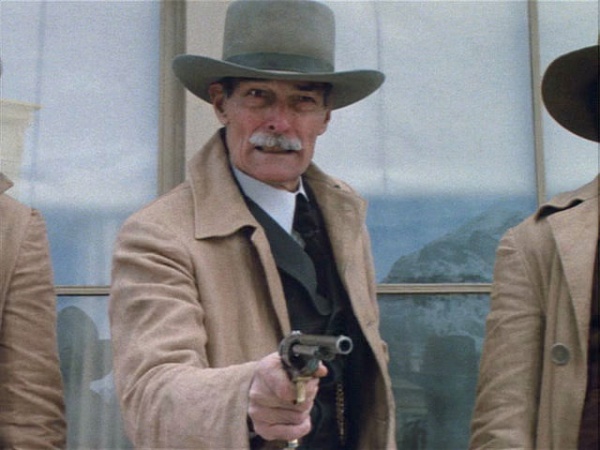 Stockburn (John Russell) shoots Spider's gold clump. Note the frame ring-mounted rear sight, an indication this is a Richards conversion, and not a Richards-Mason.

Stockburn (John Russell) kills Spider with a head shot, since a hail of his deputies' bullets apparently isn't enough to kill him.

Stockburn (John Russell) tries to draw his Colt Army after being shot up by Preacher.

Spider Conway (Doug McGrath) has a Colt Paterson 1836 tucked in his belt while visiting the town and tries to draw it when his clump of gold is shot by Stockburn (John Russell).

A Colt Paterson 1836 is tucked in Spider's belt.

One of LaHood's thugs kills gold panners' cattle with a Single Action Army 7 1/2" Cavalry revolver at the start of the film.

One of LaHood's thugs kills cattle with his Cavalry Single Action Army.

Hull Barret (Michael Moriarty) carries a Sharps 1874 rifle, referred to as a "Buffalo Gun" in the film.

Josh LaHood (Chris Penn) tries to shoot Preacher (Clint Eastwood) with a Trapdoor Springfield 1873 Saddle Ring Carbine but is disarmed by Club (Richard Kiel) before he can fire.

Josh peaks out the window at Preacher while holding his Trapdoor Springfield.

A Kentucky Flintlock Rifle is seen in the hands of one of the gold panners in the small town.

A town member with a Kentucky Rifle.

Coy LaHood (Richard Dysart) tries to shoot Preacher (Clint Eastwood) from his office with a Winchester 1866 "Yellow Boy" mocked up as a Henry 1860 by removing the forend, but is killed by Hull Barrett (Michael Moriarty) before he can fire.

Coy readies his Winchester 1866 "Yellow Boy" mocked up as a Henry 1860. Note the loading gate on receiver and lack of magazine slit and follower on the tube, indications that it is not a Henry.