From Internet Movie Firearms Database - Guns in Movies, TV and Video Games
(Redirected from The Salvation)
Jump to navigation Jump to search

The Salvation is a 2014 Danish co-production Western movie directed by Kristian Levring and starring Mads Mikkelsen as Jon Jensen, a former Danish soldier and veteran of the Second Schleswig War who emigrates to the United States together with his brother Peter (Mikael Persbrandt). Jon's wife and son are brutally killed by a pair of outlaws. Jon exacts revenge on the villains, but one of them turns out to be a brother of local land baron and gang chieftain Colonel Henry Delarue (Jeffrey Dean Morgan). Delarue begins the hunt for Jon, forcing the residents of the town of Black Creek to cooperate.

The following weapons were used in the film The Salvation:

In the scene in the stagecoach, Lester holds Jon at gunpoint.

Lester's revolver on the floor.

Jon tries to defend his family.

Paul Delarue holds Lester's revolver during a standoff with Jon.

Tracker holds his revolver during the shootout with Voichek Borowski.

The bearded bandit is gunned down and drops his revolver.

Corsican holds his revolver in the final scene.

Another view of Corsican's revolver. In the next scene, the revolver switches to a Denix replica (see below).

In many scenes, Denix non-firing replicas of Single Action Army "Artillery" and "Cavalry" revolvers are used. 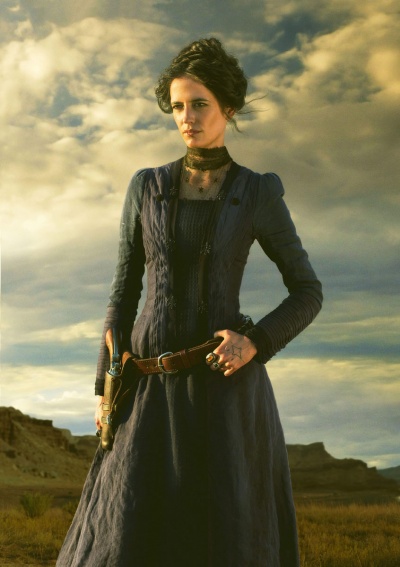 Madelaine (Eva Green) carries an "Artillery" (or maybe even a "Civilian") model in a holster in a promotional image. The grips match a Denix replica.

A "Cavalry" revolver is seen in the dead hand of a bandit. Again, the thick wooden grips allow to identify the gun as a Denix replica.

Madelaine holds a "Cavalry" revolver (may be a different prop with fake nickel finish). Note the imitation of cartridges in the chambers.

The plastic grips imitating ivory can be seen when the bandit drops the revolver. 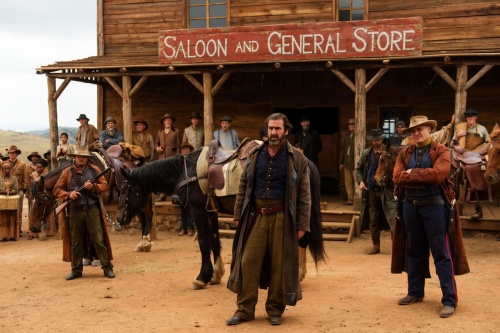 The same character (at the right) is seen in a promotional image with two matching revolvers in holsters.

Shopkeeper Voichek Borowski (Alexander Arnold) carries a "gold plated" "Cavalry" revolver in a holster during the shootout with the bandits.

About a dozen SAA revolvers of different models are seen in the Sheriff's office. The grey silumin surface, thick wooden and plastic grips allow to identify them as Denix replicas.

Paul's revolver is seen at the far left when he dual-wields his Remington and Lester's SAA revolver.

The Remington is seen at the background.

Jon takes a Remington revolver from the store.

Jon aims the revolver in the climactic scene.

Remington 1858 New Army - .44 caliber. Unlike the sample, the screen gun is nickel plated.

He kills one of the Black Creek residents to threaten the townspeople and make them to cooperate in the hunt for Jon.

The cylinder is empty but several more gunshots follow with sound and smoke.

The revolver is seen near Delarue's dead hand in the climactic scene.

A close-up of the receiver.

Jon aims the rifle at the corrupt Mayor Keane.

A good view of the rifle in Jon's hands.

Jon holds the rifle during the confrontation with the sheriff in the final scene.

Voichek Borowski (Alexander Arnold) is armed with a Winchester Model 1873 rifle during the shootout with Delarue's gang. In the climactic scene Jon's (Mads Mikkelsen) rifle switches between a Winchester 1876 and Winchester 1873 due to continuity errors.

Voichek holds his rifle during the shootout with the bandits.

Jon fires at the bandits during the shootout at Delarue's house.

Voichek aims at a bandit from the rooftop.

A close-up of Jon's rifle.

A general view of Jon's rifle.

After the attack in the stagecoach, Jon takes a Winchester Model 1873 carbine from the dead coachman.

One of Sheriff's deputies holds Peter at gunpoint with the carbine.

A bearded bandit (Langley Kirkwood) at the left fires after Peter. In most scenes, this character is seen with a Winchester Model 1866 (see below).

Henry Delarue takes a Winchester 1873 carbine from a gun rack and loads it.

Another view of Delarue's carbine.

Delarue aims at a wounded Jon in the climactic scene.

Madelaine fires and reloads a carbine.

She raises the carbine on Jon.

Bandit Jefferson (Anthony Oseyemi) holds a "Yellow Boy" carbine. His rifle looks somewhat unnatural and may be a Denix replica, but it is difficult to tell.

Sheriff Mallick (in center) holds a "Yellow Boy" carbine. His deputies are armed with Denix replicas with dull grey finish.

"Man With Cigar" (Nick Borain) (at the background) fires a "Yellow Boy" carbine.

The bearded bandit (Langley Kirkwood) reloads his carbine. The gun lacks the barrel band although the remaining groove in the handguard is visible.

The same character with a "Yellow Boy" carbine. This is a different prop, with the barrel band in place and more bright metal parts. This gun may also be a Denix replica.

The cigar-smoking bandit fires through the ceiling at Voichek, who is on the roof.

Corsican with the carbine.

Jack's carbine is seen on the ground. Again, the dull grey finish can be seen.

Carbines of two more dead bandits are seen on the ground.

Mrs. Whisler meets a suspicious stranger with a Spencer carbine in her hands.

One of the bandits holds a Coach Gun that looks similar to Colt Model 1878 but may be a Denix replica. A pair of similar guns can be seen in Borowski's store.

A bandit at the left holds a Coach Gun.

Another view of the same character holding the shotgun.

A Coach Gun leans against the wall in the store.

Another Coach Gun is seen in the gun rack in the store (in center).

A good view of the bandit's shotgun. The general appearance of the gun resembles a Denix replica.

Same bandit (at the left) holds the shotgun in a promotional image.

The gun rack in the Sheriff's office.

The gun rack in the store. A Coach Gun is seen in center (red arrow) while other guns are mostly Winchester Model 1866 carbines, some or even most of which seem to be Denix replicas.

The gun rack in Delarue's house. The guns are Winchester 1866 carbines, some of which are definitely Denix replicas.
Retrieved from "https://www.imfdb.org/index.php?title=Salvation,_The&oldid=1479782"
Categories: