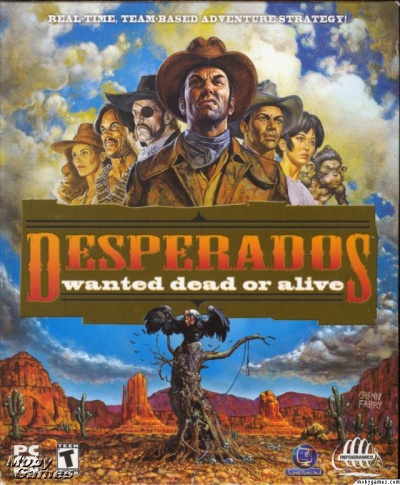 Desperados: Wanted Dead or Alive (2001) is a strategy game made by Spellbound Entertainment AG. Set in 1881, the main character is John Cooper, a bounty hunter, who is hired to capture a gang of train robbers. Cooper and his comrades set out to capture the leader of the gang, the mysterious El Diablo.

The game is essentially the same as the Commandos games, but with a wild west setting.

The following weapons were used in the game "Desperados: Wanted Dead or Alive":

Cooper's main weapon is a Remington 1858 New Army revolver. Doc McCoy also has a Remington New Army with long barrel, which the game calls the "Bluntline Special". Both guns have six bullets. It is also possible to add a telescope to Doc's revolver. Unlike all the other guns in the game, which have infinite bullets, the sniper revolver has a limited number of bullets, although it is possible to pick up more on some levels.

During some of the cutscenes other characters also carry Remington revolvers. 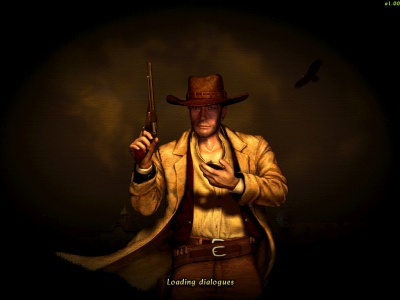 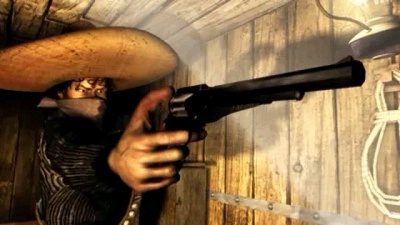 A bandit pulling his gun on one of the train guards in the opening cutscene.

In the intro cutscene for level 6, one of the card players pull an anachronistic Colt Trooper on Kate. 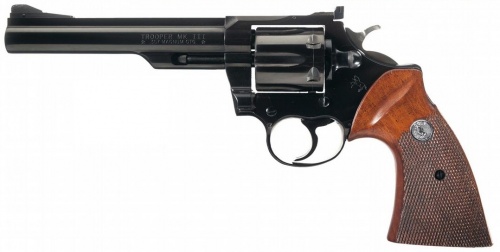 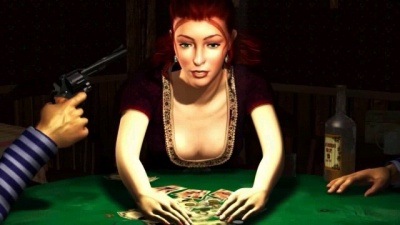 The card player pulls his Colt Trooper on Kate.

Sam carries a Winchester 1866 carbine, which has 12 bullets.

Sanchez carries a sawn off shotgun. Sanchez can also use the shotgun as a club to knock out enemies.

On some levels machine guns can be found. Although the game refer to these as Gatling guns, they actually appear to be based on the mockup Maxim 1895 machine gun from old westerns like Viva Django and Killer Kid, with a handle added to the top. Only Sam and Sanchez are able to use them. Sam can only use them, when they are fixed on a tripod, while Sanchez is strong enough to carry them around and fire them while standing. The machine guns have 200 bullets.

The Browning when Sanchez picks it up.

Sam usually carries around some dynamites, and is able to pick up some on some levels.