Cowboys & Aliens is a 2011 sci-fi western directed by Jon Favreau (Iron Man) and stars Daniel Craig, Harrison Ford, Sam Rockwell, and Olivia Wilde. The film was based on the graphic novel of the same name by Scott Mitchell Rosenberg.

The following weapons were used in the film Cowboys & Aliens:

Mose Claiborne draws his Colt 1860. Both Mose and Luke Claiborne (Matthew Taylor) are played by the real-life sons of Buck Taylor, who plays their father Wes.

The gang member next to Hunt (Walton Goggins) with a Colt 1860.

Percy with his revolver.

Jake with his newly acquired revolver.

A posse member draws his revolver during an alien attack.

Bronc (Julio Cedillo) with a Colt 1860 (Richards-Mason Conversion) after losing his Schofield.

Both Jake and Dolarhyde with pistols holstered.

Hunt (Walton Goggins) uses a 1848 Colt Dragoon throughout the film.

A gang member holds his revolver on Ella.

Another gang member with his Remington 1858.

A silhouette of Ella's Remington in the caverns.

Nat Colorado draws his revolver fighting off an alien.

Bronc (Julio Cedillo) carries a Smith & Wesson No.3 Russian Model. Doc (Sam Rockwell) later takes it and uses it as his sidearm, but returns it later in the film.

Bronc points his revolver at Doc.

Bronc back with his revolver. Doc now appears to be carrying a Colt 1860, but he never draws it.

A short-barreled 12 Gauge Double Barreled Shotgun is wielded at the beginning by Wes Claiborne, when the Claibornes confront a disoriented Jake Lonergan (Daniel Craig). He relieves Wes of it and fires it. Another one is used by Dolarhyde (Harrison Ford) during the attack on the town of Absolution.

Blurry shot, but shows more of the shotgun's detail. This shot only appears in the trailer, as a different take was used in the final cut.

Jake with the shotgun. This shot only appears in the trailer, as a different take was used in the final cut.

Nice cloud of smoke! This shot only appears in the trailer, as a different take was used in the final cut.

The shotgun can also be seen being used by Dolarhyde (Harrison Ford) during the attack on the town of Absolution. 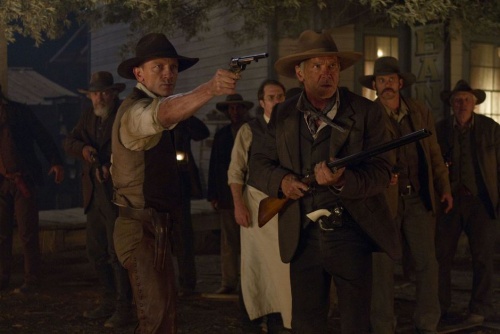 A production still from the same scene above.

Gang members with their Henrys.

The Apache on the left with his Henry.

The gang member on the right with a Henry.

The Apache on the right with his Henry.

Jake takes a deputy's Winchester Model 1866 "Yellow Boy" and turns it on the posse. It appears to be a saddle-ring carbine. Many other "Yellow Boys" are seen in the hands of various characters.

Jake with a Yellow Boy.

Sheriff Taggert with his Yellow Boy during the first alien attack.

An Apache with a Yellow Boy.

Nat Colorado with his Yellow Boy.

Jake tosses his Yellow Boy to Dolarhyde in the caverns.

A Spencer 1860 Carbine is used by both the preacher Meacham (Clancy Brown) and then passed on to Doc. Other characters use Spencers as well.

Meacham with his Spencer as he takes Jake's Colt 1860 away from him.

Meacham teaches Doc how to shoot. He says the Spencer is chambered in ".56-50," which would be correct.

A gang member with his Spencer.