Gettysburg is the 1993 war drama that depicts the events of the pivotal 1863 Battle of Gettysburg during the American Civil War. For the massive battle scenes, the production employed Civil War reenactors who provided their own kit, allowing the shooting of the scenes on a relatively modest budget, and making the uniforms and weapons seen remarkably accurate for the period. First airing as a two night event on the TNT network, Gettysburg was subsequently released on video as a four hour feature length film. Several characters from this film would return in the 2003 feature film prequel, Gods and Generals. Gettysburg is based on the novel The Killer Angels by Michael Shaara (whose son Jeff wrote the Gods and Generals novel).

The following weapons were used in the film Gettysburg:

The most commonly seen weapon in the film is the Enfield Pattern 1853, carried by Union and Confederate troops, often in the same unit as Springfields. Although this was common in the Confederate Army, the Union attempted to issue Enfields and Springfields separately to simplify logistics. Despite this, 36% of Union regiments at Gettysburg were armed with two or more types of weapons. For example, the 20th Maine had a mixture of Springfields, Enfields, and Austrian Lorenz rifles. In fact, at the time (and even more so after Gettysburg), the Confederate Army of Northern Virginia was more efficient in standardizing specific weapon calibers on a regimental level than the Union Army of the Potomac. 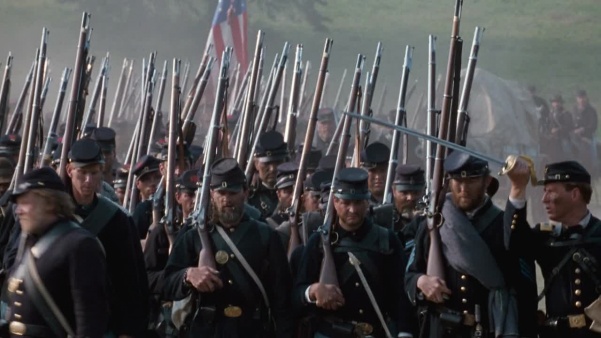 A view of marching soldiers' rifles, most of which are Enfields. 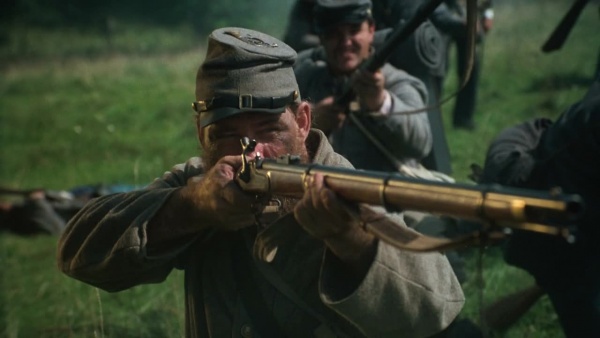 A Confederate soldier aims his Enfield. 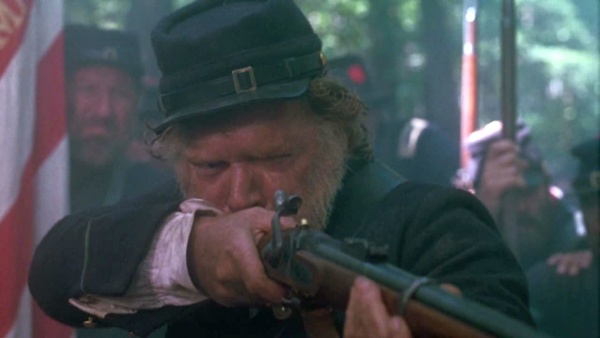 Several soldiers in the 20th and Armistead's Brigade are seen with Springfield Model 1842 muskets. Although this was a outdated weapon by 1863, several regiments at Gettysburg were still carrying Model 1842 muskets, most notably the 12th New Jersey and the Irish Brigade. 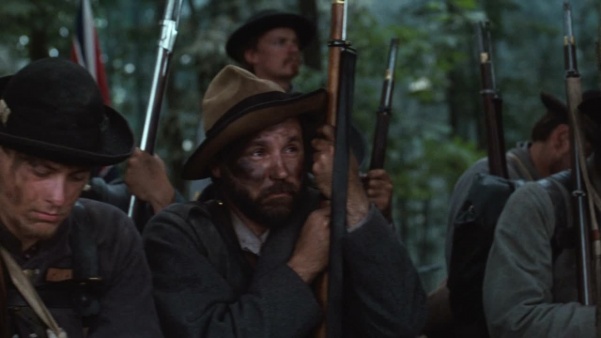 A Confederate soldier's Model 1842 Musket can be seen.

Both Union and Confederate soldiers use Springfield Model 1861 rifles throughout the film.

A view of marching soldiers' rifles. 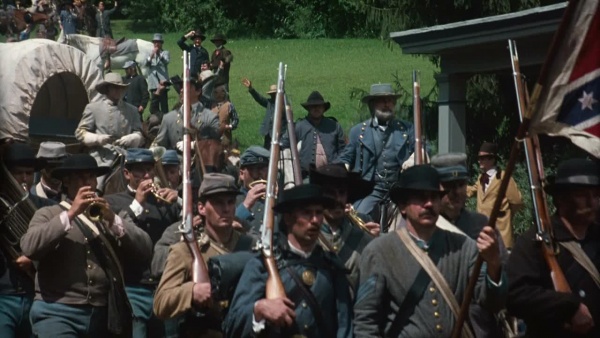 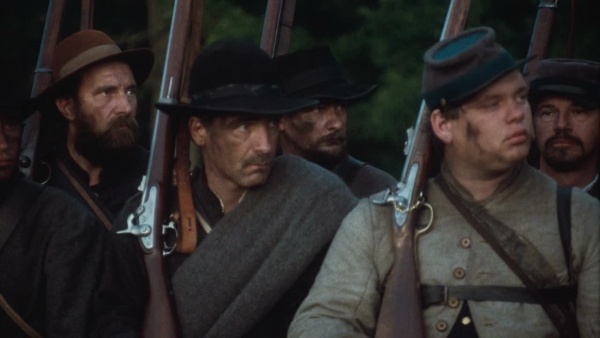 Soldiers of Pickett's division just before the famous charge on July 3rd. 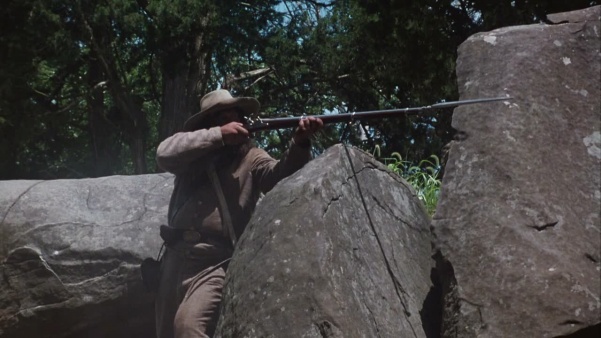 A Confederate soldier aims his Springfield.

At least one Confederate soldier can be seen armed with a Remington 1863 Zouave rifle. This is historically inaccurate: though 20,000 Remington Zouave rifles were produced, none were ever issued. They simply sat in storage until reenacting caught on, in the days before reproductions were widely available and affordable. 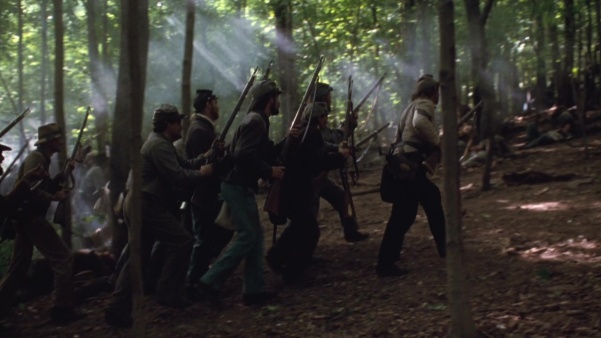 A Confederate soldier is seen advancing up Little Round Top with a Remington Zouave - notice the two barrel bands and brass patchbox.

Buford's Union cavalry use Sharps 1859 carbines along with Springfields (used by extras in infantry uniforms, suggesting not enough cavalry reenactors were available). Other than that, the Sharps is never seen in the movie again. 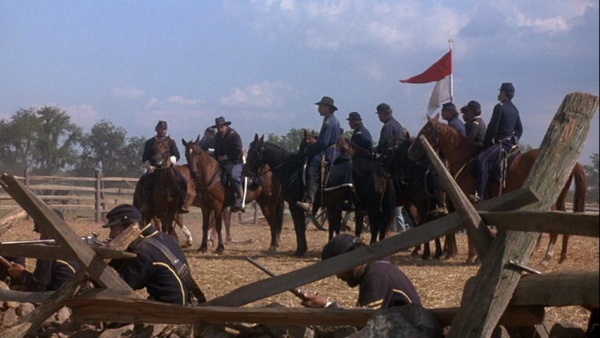 A detachment from the 1st US Sharpshooters, attached to the 20th Maine, can be seen carrying their distinctive Berdan model Sharps Rifles. 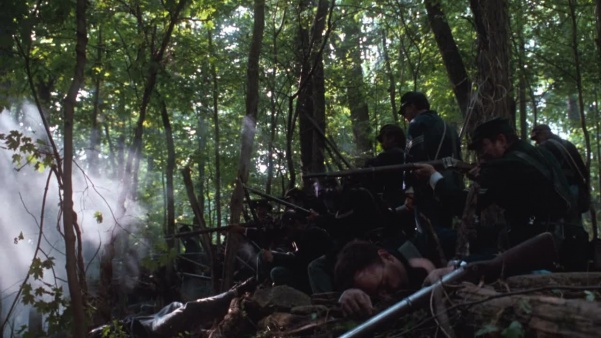 A green-uniformed Union soldier from the 1st Sharpshooters fires his Berdan Sharps rifle.

A Confederate sniper uses a scoped Whitworth Rifle to kill Union General Reynolds during the battle. The British-made Whitworth was considered the most accurate muzzle-loader available during the Civil War and prized by Confederate sharpshooters. 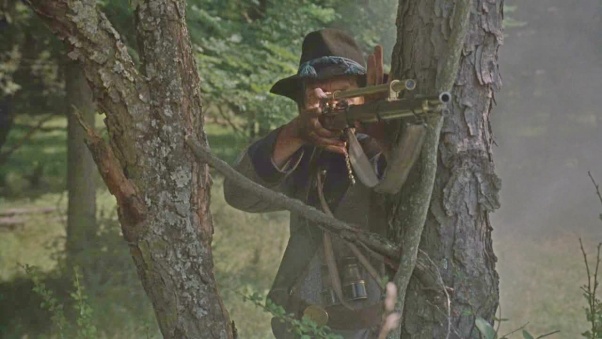 A least one Confederate soldier is seen with a M1841 Mississippi Musket before Pickett's Charge. 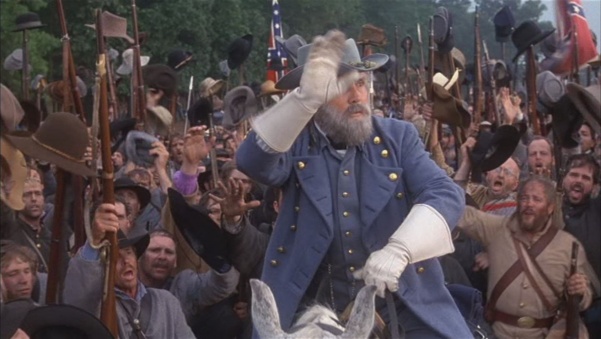 The soldier on the left next to Robert E. Lee (Martin Sheen) holds a Mississippi Musket. 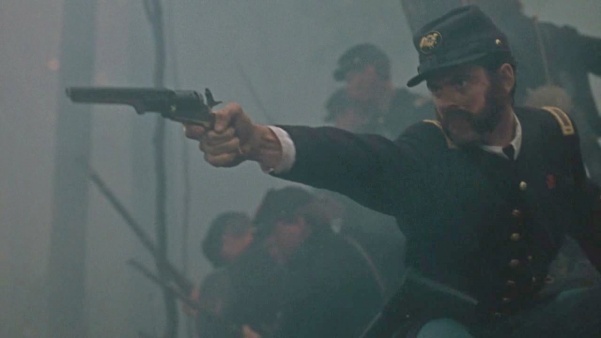 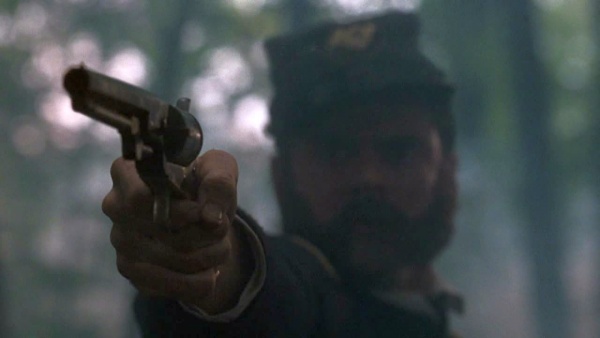 A close-up of Chamberlain's revolver.

Several Union officers use Colt 1860 Army revolvers. Joshua Chamberlain (Jeff Daniels) uses a Colt 1860 most notably at the Battle of Little Round Top. Joshua is seen reloading his Colt while waiting for the Confederates to charge again. Several other Union officers are seen using Colt 1860 Armys. 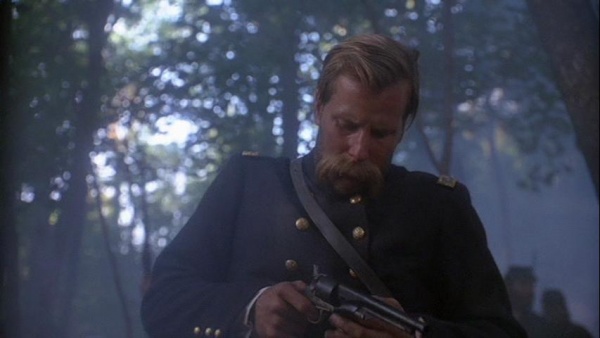 "...I remember that, as we struck the enemy's onrushing lines, I was confronted by an officer, also in front of his line, who fired one shot of his revolver at my head within six feet of me. When, in an instant, the point of my sabre was at his throat, he quickly presented me with both his pistol and his sword, which I have preserved as memorials of my narrow escape... " 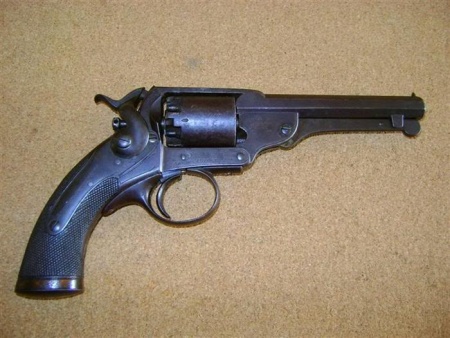 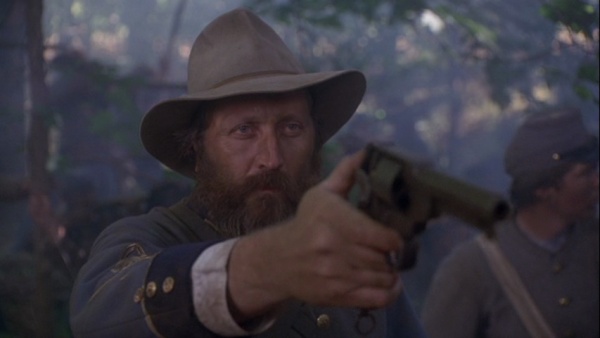 A Confederate Captain with a Kerr revolver.

A Union officer is seen firing a Remington 1858 New Army revolver immediately prior to the Little Round Top battle. 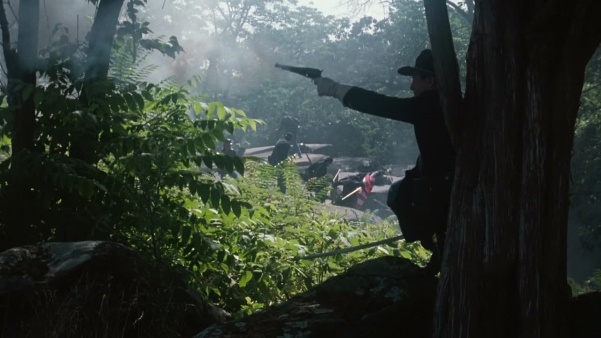 Captain Thomas J. Goree (Ivan Kane) is briefly seen with a white handled revolver that appears to be an anachronistic Colt Single Action Army. While certainly anachronistic for 1863, the fact it is never drawn, let alone fired, and appears only briefly may indicate it is simply a "holster stuffer" chosen because of its resemblance to more period-correct revolvers. 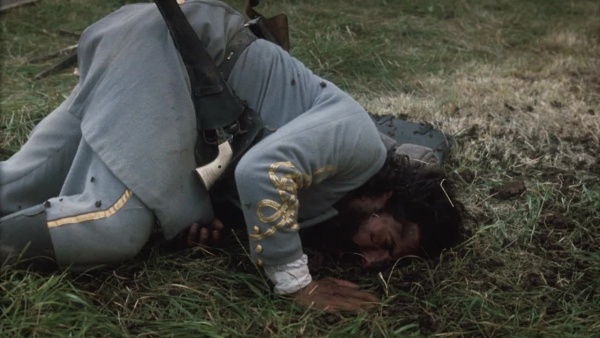 Goree is thrown off his horse and his holster opens, revealing his revolver in a brief scene.

Cannons are used in every battle scene, taking out several soldiers with each shot. 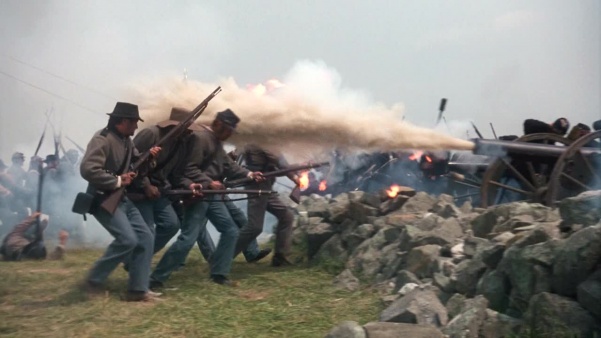 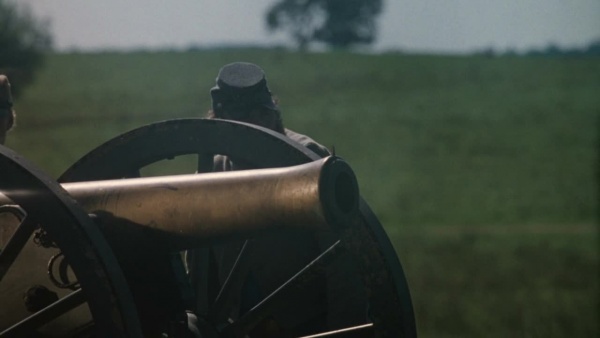 Close-up of a Union 12-pounder Napoleon. 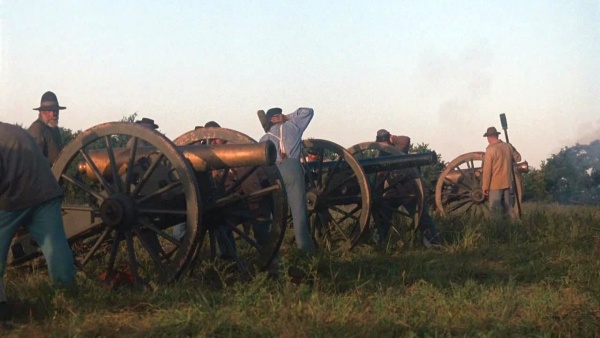 A Confederate battery consisting of two Napoleons and one Parrott Rifle.
Retrieved from "https://www.imfdb.org/index.php?title=Gettysburg&oldid=1536342"
Categories: