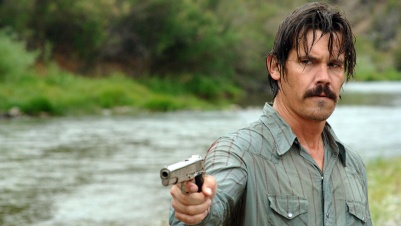 Josh Brolin holds a nickel Colt Government as Llewelyn Moss in No Country for Old Men (2007).

Josh Brolin as Matt Graver with a Daniel Defense M4A1 in Sicario: Day of the Soldado (2018).

Josh Brolin is an American actor whose credits include roles such as Thanos in several films in the MCU as well as Cable in the 2018 film Deadpool 2. He also has appeared in such films as The Goonies, No Country for Old Men, Jonah Hex, Sicario and its sequel, American Gangster and Milk, where his portrayal of Dan White would garner him an Academy Award nomination for Best Supporting Actor. He returned to voice Thanos in the Disney+ animated series What If...? He is also the son of actor James Brolin.