News of the World

News of the World is a 2020 Western movie directed by Paul Greengrass, based on the 2016 novel by Paulette Jiles, and starring Tom Hanks as Captain Jefferson Kyle Kidd, a former Confederate officer who meets orphaned girl Johanna (Helena Zengel) and accepts responsibility for taking the girl to her relatives.

The following weapons were used in the film News of the World:

Captain Jefferson Kyle Kidd (Tom Hanks) carries a Remington 1858 New Army revolver that he receives from his friend Simon Boudlin (Ray McKinnon). The revolver is a cartridge conversion. What appears to be a Remington 1858 is also seen in holster of Cavalry Lieutenant (Tom Astor).

A Cavalry Lieutenant carries a holstered revolver. The revolver lacks a screw in the heel of the grip that is used on all Colt models of the relevant period so a Remington 1858 is a good choice.

Boudlin gives the revolver to Kidd.

Kidd fires the Remington 1858 during the shootout with Almay and his henchmen.

J. G. Almay (Michael Covino) carries a nickel plated top-break Smith & Wesson revolver. Strangely, it combines features of various versions of the Model 3, such as the Model 3 style frame, Russian Model or Schofield style extractor shroud and frame latch, and the angular rear part of the frame and the grip are similar to the New Model No. 3. Exactly the same revolver is seen in Deadwood (2019) which had the same armorer Joey Rocketshoes Dillon. In any case, even the original Model 3 would be too modern a gun for 1870 Texas.

Almay's revolver in a holster.

The angular rear part of the frame looks more like a New Model No. 3.

Almay holds his revolver during a shootout with Kidd.

Another good view of the revolver.

A Colt Navy in Clay's saddle holster of the first henchman.

Revolver-wielding Clay is gunned down.

One of Farley's men holds a Colt Navy revolver.

Farley's revolver on the ground. 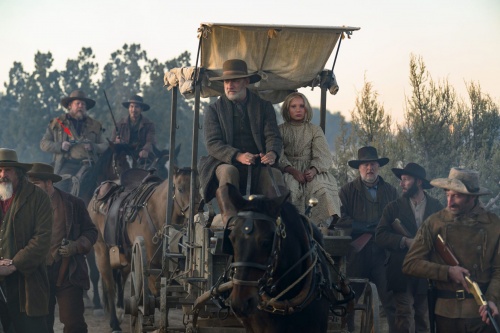 Farley's man with a Colt Navy is seen at the background left in a promotional image.

Calley fires his revolver in the night scene.

Calley gives his revolver to Kidd.

Kidd goes to performs a mercy kill on a wounded horse.

One of Farley's men is armed with a Remington 1858 "Cattleman's Carbine".

A man at the left holds a Remington 1858 Carbine.

The same man with his carbine is seen at the right.

Tom Farley (at the left) holds a Henry rifle.

Another view of Tom Farley's rifle.

An old Kiowa (at the left) carries a Henry rifle while the group travels in the sandstorm. 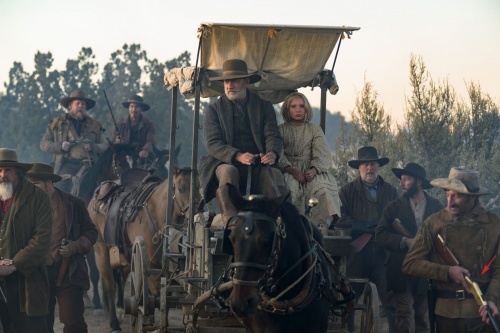 Tom Farley (at the far right foreground) with a Henry rifle in hands and some unidentified holstered revolver in a promotional image.

Clay hides behind the stone with the "Yellow Boy" rifle in hands.

A Kiowa in center holds what seems to be a "Yellow Boy" rifle or carbine.

A close-up of Cash's carbine.

One of Farley's men (mounted one at the right) holds a "Yellow Boy" carbine.

The same man with his carbine is seen at the left.

Farley's man at the background holds a "Yellow Boy" carbine.

A "Yellow Boy" carbine is seen at the right.

A Sharps carbine is seen at the far left.

A good view of the stock.

The rifle in center seems to have a curved hammer so it is supposed to be an M1861.

Soldiers with Springfields on slings walk down the street.

Throughout the movie, Captain Jefferson Kyle Kidd (Tom Hanks) carries a double barreled Coach Gun. This is a model with exposed hammers and underlever. Such guns were produced by a number of manufacturers, notably English Holland & Holland, Purdey or Greener. The markings one the gun are seen not very clearly, but still allow to guess that this shotgun may be a Holland & Holland. The shotgun shells are originally loaded with birdshot, but Johanna (Helena Zengel) suggests to load the shells with the dimes Kidd earned from his work to make more lethal ammunition. The size of dime coins perfectly fits the 12 gauge.

For reference: Holland & Holland Paradox, an example of double barreled underlever shotgun. The screen gun has shorter barrels and probably is a common smoothbore shotgun without Paradox rifling.

A cavalryman inspects the ammo of Kidd's shotgun.

A close-up of the shotgun in Kidd's hands.

Kidd shows Johanna that the shell is loaded with birdshot.

Johanna loads a shell with coins. Curiously, at least one dime has the marking "1887" on it.

Kidd reloads the shotgun during the shootout with Almay's gang.

A close-up of the shotgun in the same scene. The marking on the gun is seen unclear, but may be Holland & Holland markings.

Johanna aims the shotgun. The barrels are plugged, so possibly a dummy gun was used in this scene.

A common Double Barreled Shotgun is seen in the hands of Farley's man.

For reference: J. Stevens and Company Side by Side Shotgun (Circa 1878) exposed hammers and designed to fire Black Powder shotgun shells - 12 gauge

A man at the background holds a shotgun.
Retrieved from "https://www.imfdb.org/index.php?title=News_of_the_World&oldid=1470968"
Categories: